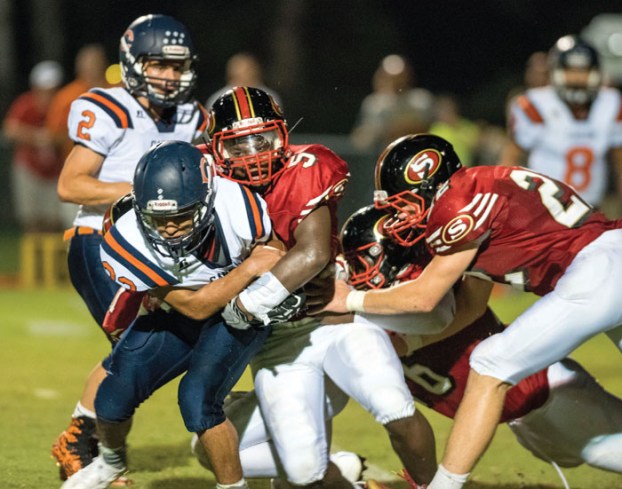 They’ve been there from the start, horses pulling in the right direction since Hinson’s first day on the job at Salisbury. This was their reward.

Johniken actually was the first Hornet that Hinson, whose previous job was offensive line coach at Catawba College, ever met. That chance encounter took place in the frozen foods section at  Harris-Teeter back in March, shortly after Hinson was announced as the Hornets’ new head coach.

“I was at the grocery store with my mom,” Johniken said. “I saw this tall man walking around and I told my mom he looked like that guy who was going to be our new coach. But I’m sort of a shy guy, so I didn’t just walk right over to him.  So my mom did. She went up and asked him if he really was the coach, and he said he was. Then she introduced me. She told him I was a football player.”

Even before Hinson asked Johniken what position he played, he asked him about his grades. That told Johniken something right there. Hinson also told him he needed to be prepared to work harder than he’d ever worked. Johniken was fine with that. Actually, he was excited about that. Since he’s been at Salisbury he’s worked out so hard and so often that he’s packed on 50 pounds. He’s added 60 pounds to his bench press just in the last year or so. He’s not 215 pounds like the roster says he is, but he does check in at a firm and strong 200.

“I was this real scrawny, 150-pound kid as a freshman and I was a short kid, too,”Johniken said. “But I’ve worked to get to where I am now and I’ve grown to 6 feet.”

Departing head coach Ryan Crowder (now defensive coordinator at Concord) always made sure the weight room was available to Salisbury’s players, and Johniken was one of those who took advantage of that opportunity. Hinson started working at the school in April. It didn’t take long for him to see that Johniken was going to be a workout warrior.

The second week of June, Salisbury’s dramatically upgraded weight room was installed. That was like a Christmas present for Johniken.

“We got that new weight room and it made all of us want to work harder,”Johniken said.

Salisbury’s coaches decided before the season to two-platoon. Austin might make an occasional appearance in the offensive backfield and star receiver Trell Baker would perform double duty as a nickel back against passing teams, but basically the Hornets would have separate offensive and defensive units.

Johniken looked like a fine option at tight end, but the Hornets also had Adam Drye there, so they were able to put Johniken on defense and keep him there.

“We really wanted to two-platoon, and it’s worked out pretty well,” Hinson said. “Johniken has been a really good defensive end. He understands the position.”

Heading into Friday’s home playoff game, Salisbury is 7-3, quite a one-season turnaround from 3-8. All three losses have been on the road —to  Central Carolina Conference bullies North Davidson (10-1) and Ledford (8-2) and to rival North Rowan (8-3). When they’ve been at home, when they’ve played against teams they should beat, the Hornets have taken care of business. There were quite a few tough losses in recent years. So far in 2017, the Hornets haven’t let any games slip away.

Johniken wears No.5, an unusual jersey for a defensive end. Johniken said he asked for 5 because that was the number worn by a California youngster named Cody Paul. Paul was a YouTube sensation when Johniken was a youngster.

Johniken believes his strongest game at defense end came against Carson early in the season. He was a handful for the Cougars to block and he made a physical stop in the red zone on Carson back Jerry Cipres.  Johniken is also excited that he tried out a Ric Flair move on East Davidson’s Mason Burchette. He made an attempt to “suplex” the 205-pound back.

Maybe the most impressive moment on Johniken’s highlight film is when he chases down a Ledford receiver about 30 yards down field. That’s not normal stuff for a defensive end. He’s one of those guys who plays faster than his 40-yard dash time would indicate.

“He’s definitely gotten a lot better since last year,” SHS defensive coordinator Mike Herndon said. “It’s obvious that he started preparing to have a big senior season in the spring. He’s been one of our most consistent guys.”

Friday’s 28-6 Senior Night win against South Rowan was another exceptional outing for Johniken. Salisbury needed him to play both ways with Drye out of action, and Johniken made key blocks on the edge at tight end. He was a bigger-bodied guy than the Raiders had been expecting to see at that position.

“Adam Drye is one of my best friends,” Johniken said. “So I had to step in there for him and try to pick up the slack.”

On defense, Johniken contributed eight rugged tackles, one for loss. He made tackles in traffic and he also made tackles in space. He shared a sack with Kevon Yelverton, the defensive end on the other side.

Johniken’s most important play was blowing up a pass play to Demarcus Blackwell for a 3-yard loss. Blackwell had blockers in front of him, but he never got started. Johniken slipped around a lineman and his sure tackle halted a South Rowan drive deep in Salisbury territory.

“What Johniken did Friday is what he’s been doing all year,” Hinson said. “He’s been a leader.”

By David Shaw sports@salisburypost.com SALISBURY — Adrian Gantt is standing on third base, but not because she just laced a... read more