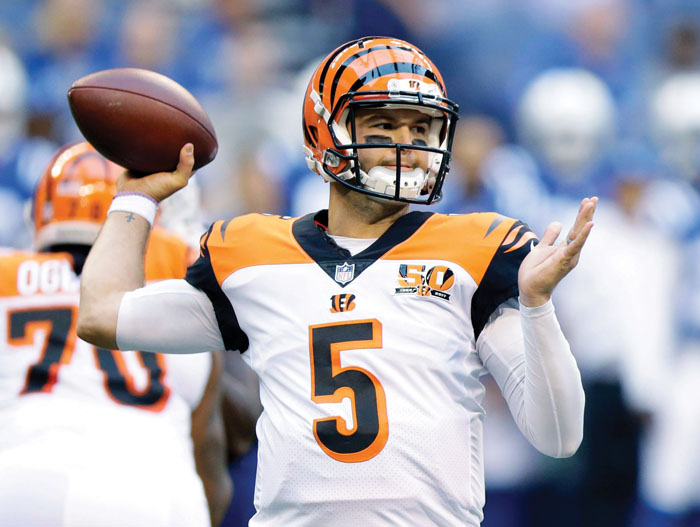 FILE - In this Thursday, Aug. 31, 2017 file photo, Cincinnati Bengals quarterback A.J. McCarron throws during the first half of an NFL preseason football game against the Indianapolis Colts in Indianapolis. A proposed trade between the Browns and Bengals involving quarterback A.J. McCarron fell through when paperwork was not filed to the NFL before the 4 p.m. deadline, Tuesday, Oct. 31, 2017. (AP Photo/Michael Conroy, File)

And this time, it cost them a quarterback.

Failing to get the necessary paperwork to the NFL offices by Wednesday’s 4 p.m. trade deadline, Cleveland’s proposed deal to get Cincinnati quarterback AJ McCarron fell apart in the final minutes, the latest misstep for a team unable to solve its quarterback riddle.

The teams had an agreement in place, sending McCarron to Cleveland for draft picks, but the required documentation — paperwork signed by both clubs — arrived in New York too late, said league spokesman Brian McCarthy. He did not provide any further detail about why the transaction wasn’t finalized.

The Browns have spent much of the past two decades in a failed search to find their franchise quarterback. McCarron might not have been that answer either, but the 27-year-old could have provided leadership and another option while the team develops rookie DeShone Kizer, who has had an uneven first seven starts.

The administrative glitch comes one day after the New England Patriots traded Jimmy Garoppolo — a quarterback on Cleveland’s radar for months — to the San Francisco 49ers for a 2018 second-round pick. The Browns, who have three second-round picks in next year’s draft, had previous discussions about Garoppolo but were unable to strike a deal.

On top of that, Browns fans have had to watch Carson Wentz and Deshaun Watson, two players the team could have drafted in the past two years, excel in Philadelphia and Houston, respectively, while Cleveland has gone 0-8 this season and 1-23 under coach Hue Jackson.

Jackson’s history with McCarron is what drew the Browns toward the Bengals backup, who made three starts, including one in the playoffs, when Andy Dalton was injured in 2015. McCarron could have helped the Browns plug the gap while Kizer develops or until the team drafts another QB.

The 6-foot-3, 220-pound McCarron has completed 66 percent of his passes for 854 yards with six touchdowns and two interceptions with Cincinnati.

Jackson’s future in Cleveland is uncertain as he Browns enter their bye week winless at the season’s halfway point for the second year in a row. He has been criticized for his handling of Kizer, who has been benched three times, as well as some head-scratching decisions during games.

Cleveland’s front office, led by Sashi Brown, is also under pressure as a plan to turn around the team has shown minimal progress.

Browns owners Dee and Jimmy Haslam have professed patience, but it will be tested by the group’s inability to complete even a basic trade.