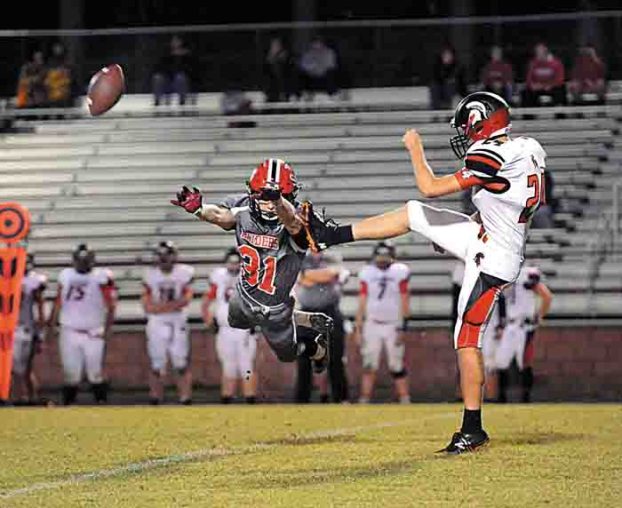 Trailing by a surprising 17-13 score at the half, the Raiders (3-7, 3-4 CCC) refocused in the second half with some smash-mouth running and a shutdown defensive effort to grab the win on Senior Night.

The Spartans (0-10, 0-7 CCC) stunned the Raiders and a large home crowd with 17-second quarter points to take their four-point lead at intermission. But Central could not withstand the South running attack in the second half, to go along with two lost fumbles and three interceptions.

“Being down at halftime was definitely not part of our game plan,” said Raiders head coach Daniel Yow. “So we had to make some adjustments. We decided we would run it right at them, plus shut them down on defense and that is what we did. As a result, we got the victory.”

The Raiders turned the ride in the second half by primarily relying on the one-two punch of running backs Demarcus Blackwell (18 carries, 84 yards) and Marquis Rhyne (17 carries, 68 yards and two rushing TDs).

Rhyne scored the first touchdown at the end of the first quarter, then iced the win in the fourth period with a 16-yard scamper with just over eight minutes left.

“We just came out fired up and more ready to play after the half,” Rhyne said. “We weren’t as prepared as we should have been for them in the first half, so we just started moving it like we should.” Both Rhyne and Blackwell racked up 64 yards each after intermission to chew up a lot of game clock.

The Raiders’ defense rose up as well by pitching a second half shut out, thanks in large part to three interceptions (four for the game) and fumble recoveries by Xavier Steele and Remington Steele that halted Spartan threats.

“I feel like we came out in the second half and did a pretty god job, said Xavier Steele, a 260-pound junior defensive tackle. “We just stepped it up and punched them in the mouth.” After notching a big sack, Steele pounced on a loose ball at the Raiders’ 28-yard line in the fourth period to halt a deep Spartan threat and preserve the lead.

Central went to the air often in the game, primarily a series of screen passes from their spread offense. Quarterback Matt Jones did connect on 21-of-31 for 232 yards including a 14-yarder to Reece Cope with just seven seconds left in the first half. But Jones was also sacked four times and picked off four times, including two by junior defensive back Christian Reynolds — one in each half.

“He (Jones) threw a few high floaters and I was able to read his eyes and get over there and make a play,” Reynolds said. “Our defense really stepped up when we had to.”

In the first half South took the early 6-0 lead on a three-yard Rhyne run but the Spartans took advantage of a Raiders fumble to drive a short 37 yards for a 7-6 lead on a 4-yard dive by Alex Trexler.

A surprise pooch kick on the ensuing kickoff was recovered by the Spartans, resulting in a 28 yard field goal by William and a 10-6 Central lead. The Spartans then pulled off the pooch kick again to take over at the Raider 49. This time, however, a fumble recovery by Remington Steele gave South the ball at the Spartan 45. On the next play, South went to their bag of tricks as quarterback Brett Amburn passed to Frankie Caraccio who then lateraled to Corey Sellars on the hitch and pitch. The play covered 45 yards and gave South a 13-10 lead with 4:00 left in the half.

Central used a Cody Kinney interception to set up their drive to take the halftime lead. Jones went to the air almost exclusively on the 77 yard drive capped by the 14-yarder to Cope in the end zone just before intermission.

South came out of the locker room and marched 80 yards to take a lead they would never relinquish. The 11 yard play included three runs each by Rhyne and Blackwell to reach the Spartan 24. But the drive appeared to stall with a loss back to the 30 on third down. Then on fourth-and-13, Amburn lobbed a perfect strike to receiver Caraccio at the goal line for the go-ahead score.

Following Reynolds’ second interception at the end of the third quarter, South then put together another marathon 80-yard drive. A Rhyne TD run was nullified by a holding penalty, by six plays later Rhyne zigged and zagged into the end zone for a 16 yard score with 8:21 left. On the conversion Cameron Hurd took direct snap to run right up the middle for a 28-17 lead that stood up the rest of the way.

Central Davidson made a couple of attempts to close the gap in the final minutes but interceptions by Raider defenders Jarrid Nelson and Scott Stephens slammed the door. Stephens also blocked a punt in the first half.

The loss was the 33rd in a row for the Spartans dating back to Halloween night in 2014 when they won at South in a rain storm. They will close out their season next week at home against West Davidson.

For the Raiders, a glimmer of hope remains for a play-off spot but they must go to Salisbury next Friday and defeat the Hornets to have any post-season future.

“It will be a huge game for us next week at Salisbury,” Yow said. “If we win, we have a shot at the playoffs, so it is do or die for us.”

Staff report MT. GILEAD — North Rowan played one of its better games of the season on Friday but still ... read more