Prep Football: Hornets turn it on late, get bounce-back win 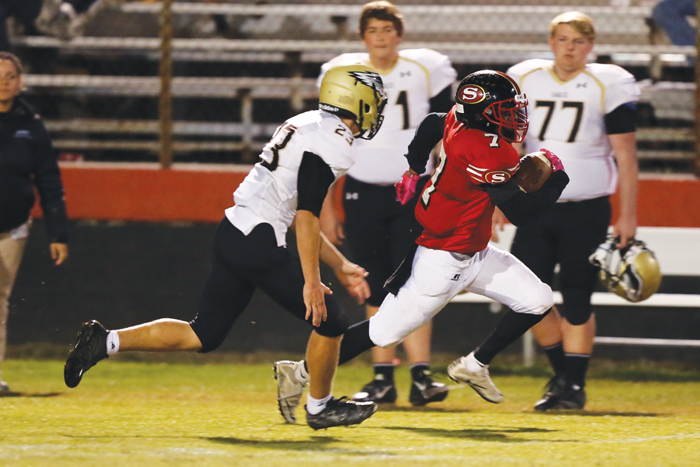 James Sipes/for the Salisbury Post ... After getting around East Davidson’s Will McPhatter (23), Salisbury’s Trell Baker (7) scores on a 76-yard run, putting the Hornets ahead to stay. Salisbury won, 27-17.

SALISBURY — East Davidson had a 10-6 lead early in the fourth quarter and had an open receiver running free down the Salisbury sideline for what looked like a certain touchdown.

Quarterback Spencer Leonard’s throw was right on target and fans groaned, but Salisbury safety Luke Holland came flying into the picture for a lunging breakup that probably saved the Hornets. They went on to beat the Golden Eagles, 27-17, for a key Central Carolina Conference win.

“That was the biggest play of the game, no doubt about it,” relieved Salisbury coach Brian Hinson said. “The way East Davidson was playing, if they go up two scores on that pass, it’s going to be tough for us. Luke made a great play. He plays soccer, so we’ve only got him part-time during the week, but we try hard to tutor him. He gets out of position sometimes, but he also makes plays.”

If Holland’s play was the biggest, the second-biggest came  moments later. Salisbury speedster Trell Baker, bottled up all night to that point, suddenly whipped around the left corner and escaped down the East Davidson sideline. He sprinted 81 yards, and the Hornets had a lead they would hold the rest of the way.

“We were having a hard time getting the ball in my hands by throwing the ball, but that running play worked,” Baker said. “We just had to find a way. I got a block, and I made a play.”

Hinson explained that the Hornets had tried that same play once earlier, but they hadn’t gotten that key block. This time freshman back Mike McLean sprung Baker.

Salisbury (6-2, 5-1 CCC) put together a 92-yard drive on its first possession. Myers found Joe Steinman for a 16-yard completion, and Myers carried the ball into the red zone himself with a strong run on the option. Myers made a short flip to McLean in the right flat, and McLean roared into the end zone from the 12 to finish the drive. The PAT failed, but the Hornets led, 6-0.

Salisbury battled miserable field position the rest of the first half and almost every snap for both teams took place on Salisbury’s half of the field. Salisbury’s defense stood firm. Outside linebacker Jabril Norman had a sack. Freshman Isaiah Clay and veteran inside linebacker Tevin Mullenax had two tackles for loss each.

“We knew they were going to run the ball a lot with 45 (Mason Burchette),” Mullenax said. “We were well-prepared for that.”

The primary offensive weapon for East Davidson is 206-pound back Burchette, the Central Carolina Conference’s No. 2 rusher. He’d carried 184 times for 977 yards coming into the game, and he went over 1,000 for the season the first time he touched the ball.

“He’s not just a powerful runner, he’s got some speed,” Holland said. “It was hard to get to him.”

Salisbury’s defensive staff had studied Burchette on film all week and had decided he was as good as advertised.

“He’s a big, physical guy and we were concerned that we wouldn’t be able to handle him with our base defense,” Hinson said. “We used our ‘Bear front,’ made it tough for them to block everybody, and they couldn’t get to our linebackers. Doing that meant we were going to 1-on-1 with our defensive backs, but we believed they could match up.”

East Davidson hit a 33-yard pass play, Leonard-to-Brandon Perrell — that set up an Austin McIntire field goal, but the Hornets kept the visitors out of the end zone and led 6-3 at the break.

“We played terrible offense, didn’t make some plays that were there, and East Davidson did a good job of defending Baker,” Hinson said. “But our defense had our backs. Those guys have been solid most of the year.”

Salisbury coaches were thinking one step ahead and they told the Hornet defenders that East Davidson (6-4, 4-3 CCC) was going to adjust to the Bear front and was going to come out throwing in the third quarter.

That’s exactly what happened. They’d been warned, but CoCo Jones still got behind the Hornets for a 55-yard touchdown catch, and East Davidson led 10-6 with 7:17 left in the third quarter.

Holland’s big breakup came next when it looked like the Golden Eagles were about to make it, 17-6.

“We’d had a miscommunication earlier, but this time I stayed back,” Holland said.

After Baker’s long touchdown gallop put Salisbury up, 13-10, Holland struck again. He was in the right position on a sideline throw, and  he made his fourth interception of the season.

Salisbury has another sprinter on offense, Tyrone Johnson. Not long after Holland’s pick, he turned a little swing pass into a a 44-yard gain that set up Salisbury’s next score. Myers got the TD on a 12-yard run, pulling the ball out of Jabril Russell’s belly on the option, and then heading for the end zone unmolested with 7:43 left to play. Jack Fisher’s PAT made it 20-10.

After Myers’ TD, East Davidson got a long kickoff return from Stone Love and a quick rushing touchdown from Burchette to slice the Hornets’ lead to 20-17.

Salisbury needed just two snaps to respond. McLean got 10 yards, and then Raheim Walker broke loose for a 52-yard jaunt against a tiring defense to make it 27-17. Walker’s score came with 5:32 remaining and gave the Hornets three touchdowns in six minutes.

“We turned it on in the fourth quarter,” Baker said.

Burchette finished with 83 yards on 21 carries, with 11 of those thrusts stopped for loss or for negligible gains, so Salisbury had accomplished its main defensive priority.

“East Davidson was a tough team, tougher than I expected,” Mullenax said. “But we pulled it out. We pulled through.”

NOTES: Inside linebacker Nick Austin had an interception for the Hornets on a ball that was tipped by Baker. … Perrell forced a fumble for East Davidson with a hard hit on Russell. …  Salisbury cornerback Tyvion Wood had a good night, with several breakups. … Salisbury has a big challenge next week at North Davidson. … Hinson said two flags on a disastrous punt return by the Hornets helped fire up the team.