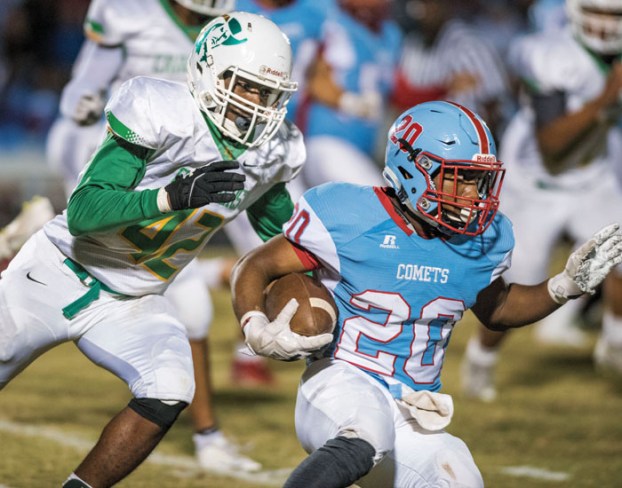 NEW LONDON —A show of hands, please, from anyone who saw this coming.

North Rowan and North Stanly were expected to wage an epic prizefight Friday night — the YVC’s answer to Sparta and Athens, ready to cross swords for first place.

Except that it wasn’t much of a fight. The visiting Cavaliers suffered four turnovers, three that laid out a red carpet to the end zone, in a disheartening 35-7 loss.

“We had a pretty good week of practice. I thought we were prepared for them,” coach Ben Hampton said after North Rowan (7-2, 4-1) kissed its six-game winning streak goodbye and dropped into a second-place tie with West Montgomery. “We stressed that ball security and execution were key. And from the word go tonight, we didn’t do either.”

The Cavs spent most of the game playing catch-up — and never did. North Stanly (8-1, 5-0) scored touchdowns on five of its last six possessions and extended its winning streak to five games.

“They’re a good team,” senior defensive end Darren Williams said. “But so are we. The score shouldn’t have been so bad.”

It wasn’t until the final quarter, when calm waters were transformed into storm-tossed waves. A scoreless opening period served only as a tease, though the Cavs nearly scored the game’s first points after a face-masking penalty changed a fourth-down interception into a first down at the Comets 20-yard line. Five snaps later — on fourth-and-goal from the three — running back Jaleel Webster was wrestled to the turf after a two-yard gain.

“We were going in down that end,” Hampton said, “but got stuffed. There were a lot of little things that needed to fall into place that didn’t.”

They did for North Stanly. Led by junior scatback Cameron Davis, the hosts racked up 219 rushing yards. Davis was a workhorse with thoroughbred speed, puncturing the Cavs for 201 yards on 29 carries and four touchdowns.

“He’s just like our running back,” said defensive end Matthew Hoosier. “Small, short, stocky. You can’t arm-tackle guys like that.”

Davis managed a pedestrian 17 yards on five first-quarter rushes. He added another 30 on six carries in the second period and scored on a late, 11-yard burst that helped the Comets mount a 14-0 halftime lead. “He would stay low, lower his shoulders and be ready to hit,” Williams said.

In the second half, Davis had the Cavs wondering if he was born with wings. He busted a 44-yard run to the North Rowan 5-yard line, then scored to make it 21-7 with 1:56 remaining in the third quarter. Three minutes later, he took a handoff from quarterback Avery Merritt and navigated downfield like his name was GPS, on a 27-yard TD run. The Cavs seemingly had him stopped near the right sideline after a short pickup, but he wiggled free and scored standing up.

“It usually took more than one person to take him down,” said freshman linebacker Xzavier Davis. “A lot of times, I was the only one who got to him — and he’d get loose. We had a lot of missed tackles because we weren’t getting set right.”

North Stanly’s Davis made his fourth end-zone appearance, and 29th of the season, to close the scoring with 4:27 to play. This time he capped a 52-yard drive with a 9-yard scamper around right end.

North Rowan’s only touchdown came midway through the third quarter and drew the Cavs within 14-7. Quarterback Willis Mitchell fueled the rally with a 41-yard completion to flanker Isaiah Gibson, then a handoff to Malcolm Wilson for a 24-yard gain to NS 6-yard line. On first-and-goal Webster took a wildcat snap, ran parallel to the goal line and snuck into the right corner.

Perhaps more notable was the fumble Webster lost in the second period. He was about to shift gears on a sideline run when North Stanly defender Wes Reynolds wrestled the ball from his grasp and returned it to the Cavs 11-yard line.

“It was a strange play,” Webster said. “He just took it out of my hands. I went to make a cut and he grabbed the ball and my arm at the same time. It gave him better position.”

Other North Rowan turnovers include two Mitchell interceptions and a fumbled punt early in the final quarter. Add them up and it produced one miserable evening.

“If we could have handled the ball better, we could have executed more,” said North right tackle Benjamin Caldwell. “Now, we’ve got to look at where we messed up and try to fix our mistakes.”

NOTES: Webster, already a 1,000-yard rusher, was limited to 67 yards. The touchdown was his 14th of the season. … The Cavs were held to 68 total yards in the second half. … Williams was one of three North Rowan players helped off the field with injuries. Also banged up were Jordan Goodine and Chaz McCombs. … The Cavs visit West Montgomery (7-2, 4-1) next Friday.