South Rowan puts it all together, whips West Davidson 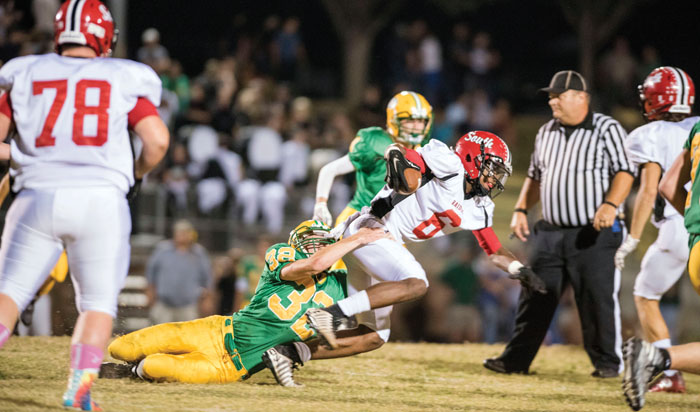 TYRO — For a team that has to savor every victory, this was one to remember.

South Rowan reacquainted itself with the end zone and won for the first time in a calendar year Friday night — grinding its way to a 32-20 CCC win at West Davidson.

“It’s something we’ve worked very hard for,” third-year coach Daniel Yow said after a post-game Gatorade bath. “We finally figured out how to finish a team off. After all we’ve fought for, it’s a wonderful feeling.”

South (1-6, 1-3) scored five touchdowns — including two in a folly-filled fourth quarter — and snapped a 10-game losing streak that dated to last Oct. 7. The Raiders rushed for 333 yards and had two runners eclipse the 100-yard mark.

“We had a game plan and followed it through,” senior back Marquis Rhyne said, after sledding for 132 yards and a pair of TDs. “Look at the scoreboard. It tells the story.”

This was paradise by the scoreboard lights for South. After weeks of starving for a victory, the Raiders got to pig out.

“We came out very explosive,” receiver Frankie Caraccio said. “We wanted to establish our offense right away and we did that on the first drive. Then they scored, but the important thing is we hopped right back on the train. We were lucky enough to get through it.”

Behind quarterback Brett Amburn and an inspired offensive line, South took the opening kickoff and marched 80 yards in 10 plays for the game’s first points. On a fourth-and-8 call, Amburn (5-for-11, 96 yards) connected with wideout Connor Childers on a 20-yard scoring pass.

West Davidson (1-6, 0-5), which descended into the conference crawlspace, used a long kick return and a 35-yard touchdown run by Caylen Watson to inch within 7-6 just seconds later. South’s lead bulged to 19-6 by halftime on a couple of dramatic, film-at-11 plays. First, Rhyne took a handoff, navigated through some middle-of-the-line gridlock, picked up seal-off block from wide receiver Garrett Harrington and squirted free on a 76-yard touchdown run down the right sideline.

“I give that one to my offensive line,” Rhyne said with a 150-watt smile. “I fought my way through the line, found a hole and hit the gas.”

South’s third score came on a perfectly designed hook-and-ladder play late in the first half. Facing second-and-long from his own 15, Amburn fired a 7-yard sideliner to Caraccio, who flipped an underhanded lateral to Kory Sellers — who flashed by and raced the last 78 yards down the right sideline.

“That was the best play of the day,” Caraccio said. “As soon as I caught the pass, two guys were on me, but I was able to get the ball to Kory in perfect position. It was amazing.”

The Dragons countered with a steadfast third quarter before making things interesting in the fourth. First came a safety when Demarcus Blackwell was wrestled to the turf in the end zone. The ensuing drive saw West advance all the way to the South 6-yard line, where bruising back Mason Easter fumbled a first-and-goal handoff into the end zone. Sophomore lineman Riley Martin pounced on the loose ball like it was a late-night snack and the hosts were within 19-14.

“We were concerned,” Yow said. “We made a lot of mistakes in the fourth quarter. But at the end of the day, we got there. We overcame all of that and won the game.”

Of course, that took some doing. South stitched together the game’s decisive drive, beginning midway through the final period from its own 20. After four straight penalties — two against each team — Amburn was looking at third-and-15 from the South 27.

“Coach (Jarrod) Smith called a play,” Yow reported, “that almost worked earlier and got us a pass interference call. We figured, ‘What the heck — we’ll try it again.'”

This time Amburn spiraled a hard pass toward the South sideline that Caraccio snagged and transported 58 yards to the West 15. “We tried it like two plays before,” he said. “The defender was forcing me to go outside, so I cut to the inside and Brett hit me in the only place it could have worked.”

Two snaps later, Blackwell scored on a 3-yard sweep and — following a back-breaking interception and return by defensive back Christian Reynolds —  Rhyne scored his second TD of the night with just 1:13 to play.

Not to be overlooked was a solid performance by South’s defensive unit, which yielded only 69 total yards and two first downs in the first half. “Nobody sees the hard work we put in day after day,” linebacker Patrick Long said. “This is our reward. The game isn’t over until that clock shows all zeroes, but that just made us work harder.”

When it was over, as the celebration unspooled, Rhyne remained uniquely grounded.

“We’ve made it to a peak, that’s all,” he said nonchalantly. “We still have to climb the mountain.”