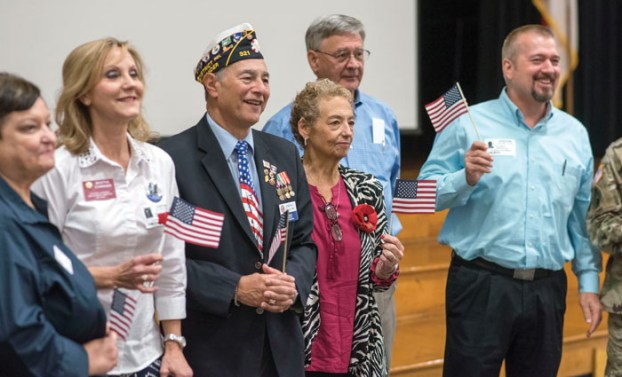 Joseph and Toni Reale (center) were speakers for the program. The student body at Corriher-Lipe Middle School held a special program on the 16th anniversary of the 9/11 attacks on the US. Jon C. Lakey/Salisbury Post

LANDIS — The auditorium at Corriher-Lipe Middle School was a sea of red, white and blue Monday morning as students held aloft individual American flags in honor of those who died on 9/11.

The school gathered early to remember the Sept. 11 terrorist attacks, which occurred 16 years ago. But in 2001, none of the students had been born — a fact that made Monday’s assembly even more important.

“It’s good to keep all the history intact,” Corriher said of the gathering.

During the two-hour presentation, Corriher walked students through the tragic events of that Tuesday morning and through the incredible response that followed. The program included video footage showing the planes hitting the two towers of the World Trade Center, firefighters rushing into the buildings and the inevitable fall of the buildings.

“This is not a made-for-TV movie. This was real,” Corriher said.

Two guest speakers, Joe and Toni Reale, were in New York and the surrounding area on that day.

Joe Reale worked on the towers as an electrician back when they were built in the 1960s. He said he remembered standing on the 20th floor of the south tower, looking over the barren area and the “hole in the ground” that was the future site of the north tower.

“Who in God’s name is ever going to want to come down to this south corner of Manhattan and occupy this building?” he recalled thinking.

On Sept. 11, 2001, his wife, Toni, went to work at her office on Long Island. She was a lawyer at the time and had a direct view of the towers from her office. Everyone there, she remembered, rushed to the window when the first plane struck. They all thought it was an accident. But when the second plane hit, “we were horrified.”

A co-worker had been on the phone with a friend who worked in the north tower.

“She saw the plane go in, and all communication stopped,” Toni said.

A few days later, Toni drove into the city and told students about the gaping hole in the New York skyline and the way the entire city smelled of jet fuel.

“I felt like I could barely drive because my heart was going to break,” she said.

But there was a silver lining. In the hours, days and weeks that followed, the couple saw local people flooding into churches, fire stations and rescue centers asking how they could help. Crowds collected water, food, clothing; gave blood; and worked together to support a broken city.

It’s a spirit, Joe said, that began in the Revolutionary War and is as old as America.

“This is what Americans do when disaster strikes,” he said. “We band together.”

Patriots Day is also the National Day of Service and Remembrance, and the school invited public service workers from all over to come and talk to students about serving others and working to build up communities.

Volunteer firefighters, assistant fire chiefs, pastors, teachers, military personnel and police officers talked about the importance of community service and finding something that you love.

Landis Assistant Fire Chief and Alderman Dennis Brown said he has been an assistant firefighter for 40 years and encouraged students to find something helpful that they, too, could continue for decades to come.

“Help out at the homeless shelter, help out at your local church — there’s lots of things you can do, but the main thing is that you help your fellow man,” he said.

His words were echoed by Landis Police Chief Kenny Isenhour, who encouraged students to start then and there with something as simple as writing a letter or picking up trash.

“You don’t have to wait until you’re an adult to serve,” he said.