David Freeze: A day that ends well is a good one 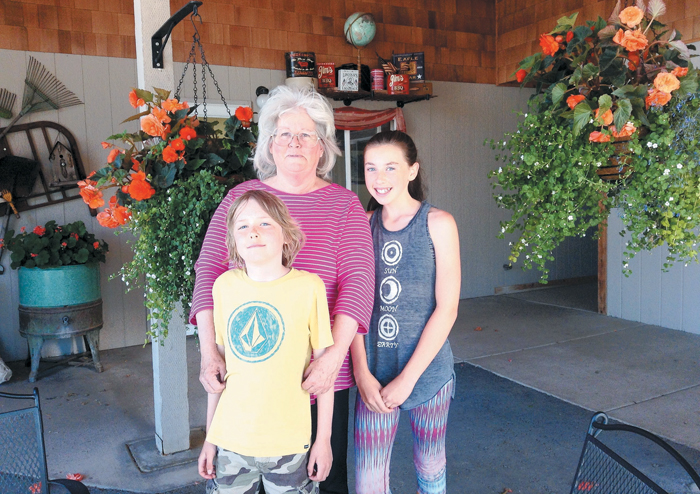 After struggling this afternoon to find the right place for the night, Carlo Ramage made me a great price and provided one of the best rooms of the trip so far. On her left is Miles Colliander and on her right is Cloey Ramage, Carlo's grandchildren. David Freeze/For the Salisbury Post

After spending a pleasant evening at the Silverado Motel in Eureka, Montana, on Tuesday night, I felt great Wednesday morning. With daylight staying later in the evening, it is slow to arrive in the morning, and people seem slow to get out and moving.

Eureka is a cool little town where you can understand the “Big Sky” concept. I could see for miles with a couple of thunderstorms going on but neither got near.

Eureka was once known as the “Christmas Tree Capital of the World.” Actor John McIntyre was raised and is buried there along with his wife, actress Kathleen Nolan. With just more than 1,000 residents, residents have made it look a lot bigger than I expected.

While in the room Tuesday night, I finally got the bike computer going and am now able to track my own mileage. A conversation with the technical guy at Sigma gave me some things to try, and one of them worked — just not sure which.

I was just nine miles from Canada Tuesday night but have now gone south and east. I will enter through another crossing point, possibly even by Friday. Being so close to Canada makes it not surprising that Canadian and BBC channels were on the TV.

I left Wednesday morning by riding through Eureka and heading out on State Road 93 and experienced a huge climb leaving town. There were several of those but plenty of moderate stretches as well.

It was a good riding day, now that I could track my own mileage again. I was disappointed to only have 64 miles Wednesday but I am happy with how things turned out.

I saw deer after deer in the morning. Traffic was moderate, and usually I had plenty of road shoulder to ride on.

The first town along the way was Fortine, but a side trip was required to see it. I didn’t. Then came Stryker and Olney, both very small and the latter with a population of 26.

The first big town was Whitefish, home of Glacier Cycle, where I stopped in and talked to Mark Ambre about how to get through or around Glacier National Park. The road over the top is closed still, and bikes are restricted from the park from 11 a.m. until 4 p.m., so on this trip I have no choice but to go around the southern alternate. I will be skirting the park this coming out on the eastern end.

There is still a peak to climb, so the trip will be slow going. Mark had a plan where I could drag my bike across the snow at the top, but I won’t do that this time. It was fun talking to him, and I picked up a couple of supplies.

I left the Adventure Cycling course for the rest of the day, which is going to be normal after just a few more days. I went south of Whitefish and came to Columbia Falls, now my jumping off point for a big day today. It looks to be about 20 miles to the park entrance and then about 51 miles through the park. I will exit at East Glacier, hopefully sometime late this afternoon.

One of the highlights of my day was finding myself at the Glacier Inn Motel in Columbia Falls. I had called earlier to check pricing but hoped to get closer to the park entrance before stopping for the night.

Carlo Ramage and her husband, Steve, gave me a great price for a wonderful room. I am happy to have stopped there to get rested for the challenging day.

Carlo helped me understand how I can make my way to Canada once exiting the park on the east side, something that neither Adventure Cycling nor anyone from this area has been clear or confident of. Her thoughts matched those of Leonard Wood from home, so at this point, I know what to do.

As I have said often, there are plenty more things to see that will just have to be visited later. Washington Pass was almost as high as Logan Pass in Glacier Park, and I saw plenty of snow there too.

A gusty westerly wind was blowing Wednesday afternoon, and I hope it does the same today, thus providing a tailwind. Temperatures made it to the 70s after another chilly start. Today is supposed to be even colder, probably well down in the 40s.

I’m betting there will be stories to tell Friday. I hope you will join me again.

Rowan County aims to recoup costs of caring for…