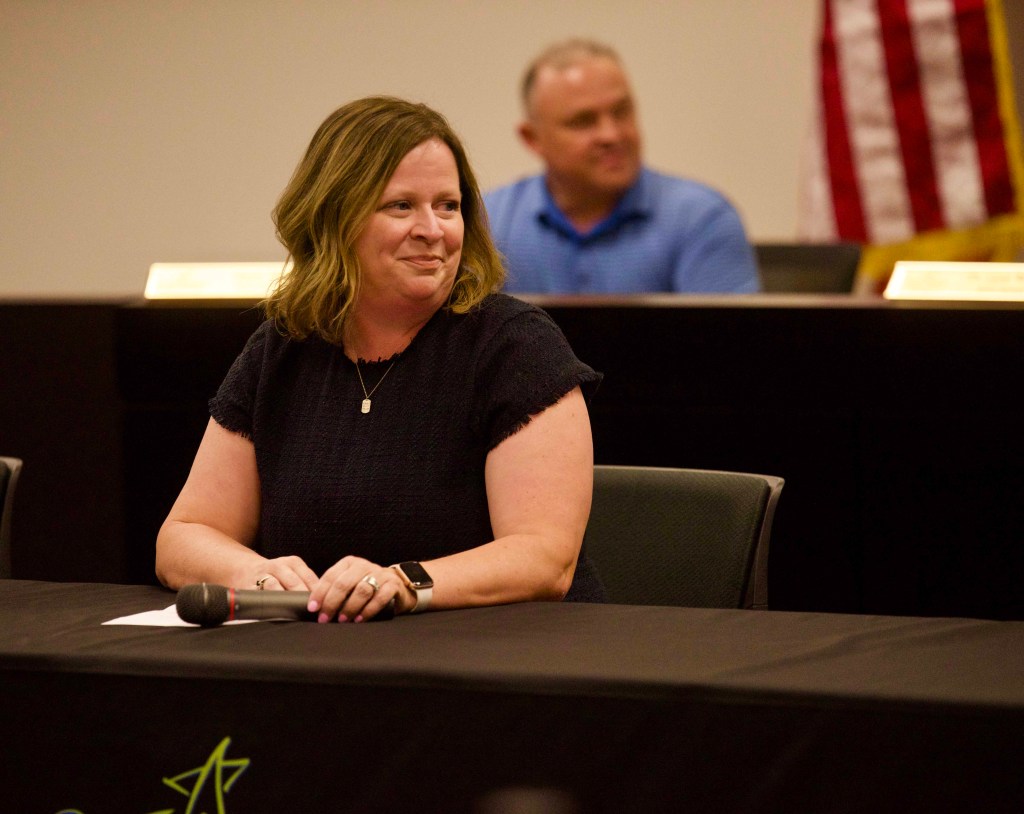 Carl Blankenship/Salisbury Post - Kelly Wither being presented as the incoming Superintendent of Rowan-Salisbury Schools on Friday. Withers spent almost her entire career as an educator with the district before departing for Cabarrus County Schools in the winter.

SALISBURY — Kelly Withers will serve as the next superintendent of Rowan-Salisbury Schools after a unanimous vote on Friday afternoon.

The school board called a meeting specifically to consider the appointment and entered closed session for a few minutes before emerging and voting to name Withers superintendent. Board Vice Chair Alisha Byrd-Clark was the only member who did not attend due to a prior engagement with her nonprofit organization.

Withers will be paid $185,000 annually through June of 2026. Withers’ contract will be available for scrutiny on Monday. A start date has not been determined yet.

She currently serves as deputy superintendent of Cabarrus County Schools, but Withers has a long history with RSS. She was hired in Cabarrus in late 2021 after serving as chief schools officer with RSS and she had spent more than 21 years with the district.

In 2020, she was promoted to associate superintendent under Lynn Moody days before schools were ordered to close that March due to the COVID-19 pandemic. Like many other high level administrators, her title changed under the next administration.

As a principal, Withers was a district darling for her work on renewal-era programs and South Rowan High was one of the first schools to have its initial renewal plan approved by the school board.

Withers was brought out to sit in front of the crowd that gathered in Wallace Educational Forum’s first-floor board room with her family.

“It feels good to be home,” she said.

Withers lives in Rowan County and is a product of RSS schools. She said the greatest reward of working as an educator is living in the community where you interact with students who are the product of your work.

“Seeing the students that you worked as an educator become parents, spouses and productive, passionate citizens is the ‘why’ of our work,” Withers said.

She said the district has work to do to reach a vision of a school system that is a catalyst for community improvement and she is ready to get started.

Withers told the Post the district means a lot to her and her family.

“It’s what’s going to change this community, and it’s the community we live in,” Wither said.

She said she wants to invest in the community for her family and the 18,000 other students who live in Rowan County.

RSS Board Chair Dean Hunter said Withers was chosen out of 22 candidates who applied for the job and the decision was “not taken lightly.”

“This has been a long, arduous process,” Hunter said.

The board began its search in April after former Superintendent Tony Watlington resigned to lead Philadelphia’s public schools.

Hunter said there were several candidates the board would have been happy with that spurred healthy debate, though the body was unified behind Withers on Friday.

April Kuhn, the district’s chief student services officer, is serving as interim superintendent and was appointed to that position in July after the previous interim and Chief Academic Officer Jason Gardner resigned to become principal of Mooresville Graded School District.

Hunter credited Kuhn for the job she has done as interim.

“There have been many, many fires put out in the past month,” Hunter said.