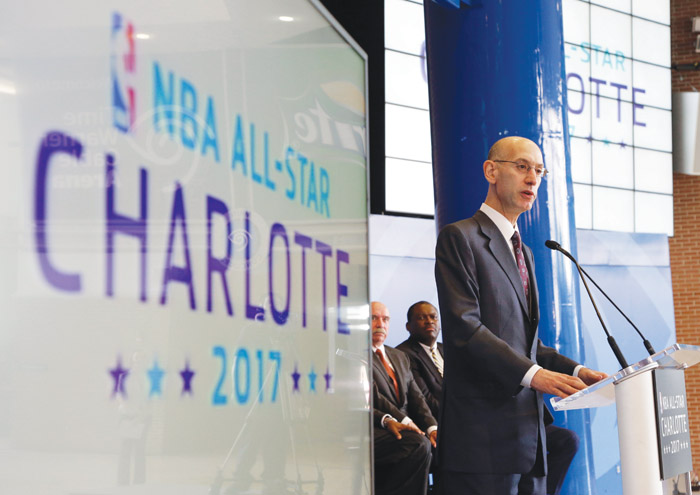 FILE - In this June 23, 2015, file photo, NBA Commissioner Adam Silver speaks during a news conference to announce Charlotte, N.C., as the site of the 2017 NBA All-Star basketball game. The NBA All-Star game will be coming to Charlotte in 2019, two years after the city was to host the event, the NBA announced Wednesday, May 24, 2017. The All-Star game had been set for Charlotte last February, but the NBA moved the game to New Orleans because of the state law restricting the rights of LGBT people. (AP Photo/Chuck Burton)

CHARLOTTE (AP) — The NBA All-Star game is headed back to Charlotte in 2019, a couple of years later than anticipated.

The NBA announced that the All-Star weekend will be held Feb. 15-17 in Charlotte and the game will be played at the Spectrum Center, home of the Charlotte Hornets.

The league had selected Charlotte to host the 2017 All-Star game, but later moved the game to New Orleans because of the state law restricting the rights of LGBT people. However, a compromise was struck in March to partially erase the impact of the House Bill 2 law limiting anti-discrimination protections for lesbians, gays, bisexual and transgender people.

“While we understand the concerns of those who say the repeal of HB2 did not go far enough, we believe the recent legislation eliminates the most egregious aspects of the prior law,” NBA Commissioner Adam Silver said in a release. “Additionally, it allows us to work with the leadership of the Hornets organization to apply a set of equality principles to ensure that every All-Star event will proceed with open access and anti-discrimination policies.

“All venues, hotels and businesses we work with during All-Star will adhere to these policies as well.”

Despite Silver’s intentions, the Equality NC and the Human Rights Campaign has concerns that no protections for non-discrimination policies for the LGBTQ community have been put in place by the Charlotte or the state.

The NBA is the latest sports entity to return events to North Carolina; the NCAA and the Atlantic Coast Conference also are bringing events back to the state after changes were made to the law.

The now-repealed House Bill 2 required transgender people to use restrooms corresponding to the sex on their birth certificates in many public buildings. That’s been dropped, but LGBT advocates have denounced the replacement law because state officials took no action barring sexual identity and gender discrimination in workplaces, restaurants and hotels and instead prohibited local governments from acting on their own.

Hornets owner and longtime NBA great Michael Jordan said in a release he is “thrilled” the game is coming back to Charlotte.

“We want to thank Commissioner Silver for his leadership throughout this process and for the decision to bring NBA All-Star back to Buzz City,” Jordan said in the release. “All-Star Weekend is an international event that will provide a tremendous economic impact to our community while showcasing our city, our franchise and our passionate Hornets fan base to people around the world.”

Jordan asked Silver to keep the city in mind for 2019 after the league moved the 2017 game — hopeful the HB2 law would eventually be repealed.

Hornets COO and president Fred Whitfield represented the Hornets and Spectrum Center in doing whatever he could to help facilitate a resolution, spending time meeting with legislatures and other business leaders in North Carolina.

“From the very beginning I was in engaged to see if we could not only save the 2019 All-Star game, but the NCAA (basketball) regionals and the ACC Tournament, as well as concerts and events in the building,” Whitfield said. “We are operators of the building and we felt like we had to get engaged to assist to get some resolution.”

Even as talks to repeal HB2 stalled at times, the Hornets continued to move forward with the league’s request to upgrade the arena.

The $41 million renovation — $33.5 million of which came from the City of Charlotte — is almost complete, and has included a new scoreboard, new floor and renovations to suites and hospitality areas, among other upgrades.

Charlotte previously hosted the All-Star game in 1991 at the Charlotte Coliseum, which has since been demolished.

Pete Guelli, the Hornets executive vice president and chief sales and marketing officer, estimates a $100 economic impact for the city, but said the reputational effect will be even bigger.

“This city has changed significantly since the last time it hosted a game 28 years ago,” Guelli said, “and the opportunity to showcase that on an international stage is incalculable.”