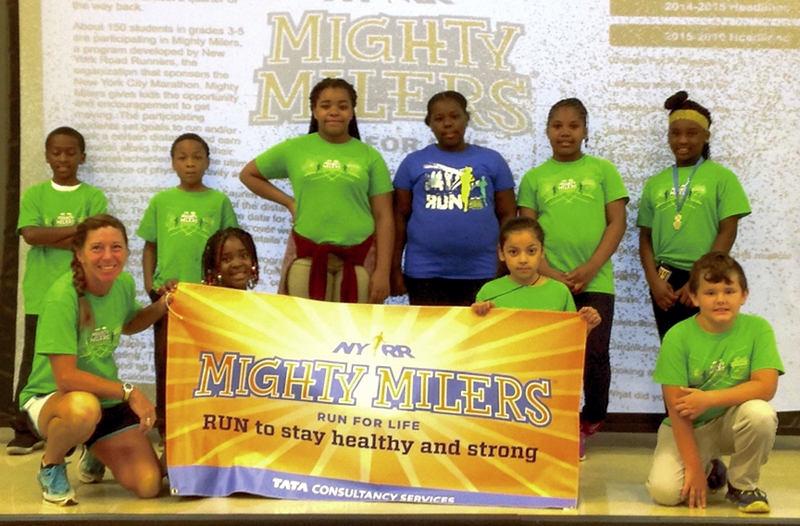 One of the Salisbury Rowan School System’s PE teachers has made a habit of inspiring her kids. Each year, Sara Noble-Phillips does a program called the Mighty Milers. Sara said, “All I had to do was fill out an application to the New York City Road Runners Club and hope it got accepted. I wanted to start the program to help my students learn about setting goals and building their self-esteem.” Sara first got the grant for the program while teaching at Overton five years ago.

A native of New York state, Sara began running herself in middle school and continued running while in the Army Reserves and while teaching high school for three years. After moving to Salisbury, she connected with the Salisbury Rowan Runners and later ran with the Red-Hot Mamas on the Blue Ridge Relay. In Rowan County, Sara has taught at Corriher-Lipe Middle School and at Rockwell, Isenberg, Landis, Millbridge, China Grove, Overton and Koontz where she introduced the Mighty Milers this year. That program at Koontz concluded on May 11, just ahead of end of year testing. Sara has 20 years of teaching under her belt.

Sara said, “The program gets kids moving with a goal of accomplishing a marathon (26.2 miles) within their school year.  I believe kids need to be introduced to lifelong fitness at an early age to prevent obesity and illness. Big success comes from kids realizing that they met their goals when I get to place their marathon medal around their neck. They build friendships created by walking and running with other students each week. Almost every student completed their marathon this year!  They also improved their physical fitness cardiorespiratory scores from August until May. The Mighty Milers program also improved school spirit because the children were proud to wear their T-shirts and medals and other students cheered them on.

The Mighty Milers program is a free running program for kids of all fitness levels.  The program teaches students about physical and mental-health benefits of running and exercise in general, helping them become more comfortable with engaging in physical activity.  It is easy to implement and motivated by tons of training support from the NYRRC.  Sara said, “I believe the program inspires students to create a better “self” and hope they will take something away with them; to run that extra lap, never give up or back down, and believe in reaching their goals.”

NYRRC’s mission is to help and inspire people through running.  The students participate in their Mighty Milers sessions in PE class and at recess during which they can walk briskly or run in a supervised session.  During the current school year, more than 157,000 youth participated nationwide in Mighty Milers while collectively running 5.3 million miles.

Sara said, “I loved playing sports and games every summer as a camp counselor and believe that you should do what makes you happy.” She has used the Mighty Milers club to make a lot of kids happy at Millbridge, Landis and Overton elementary schools during the last five years.

Next up for the races in the area are three of my favorites. Saturday, May 27th, is the Bare Bones 5K. Intended originally as a thank you to local runners for supporting various charities, the race at Knox Middle School has evolved into a major Relay for Life fundraiser. Walkers are welcome as usual at all the local 5K events.

June 3rd has the Historic Badin Triathlon which includes an open water swim event along the edge of Badin Lake and very scenic bike and run courses. And on June 9th, the largest race in the county takes place at the Main Street Challenge 5K in China Grove. The Town of China Grove and the South YMCA put on a great Friday evening show. For more information on all of these events, go to www.salisburyrowanrunners.org

Have a great week and keep an eye out for all the local runners and walkers during our late spring weather!