Patrick Reed surges ahead in Wilmington at Wells Fargo 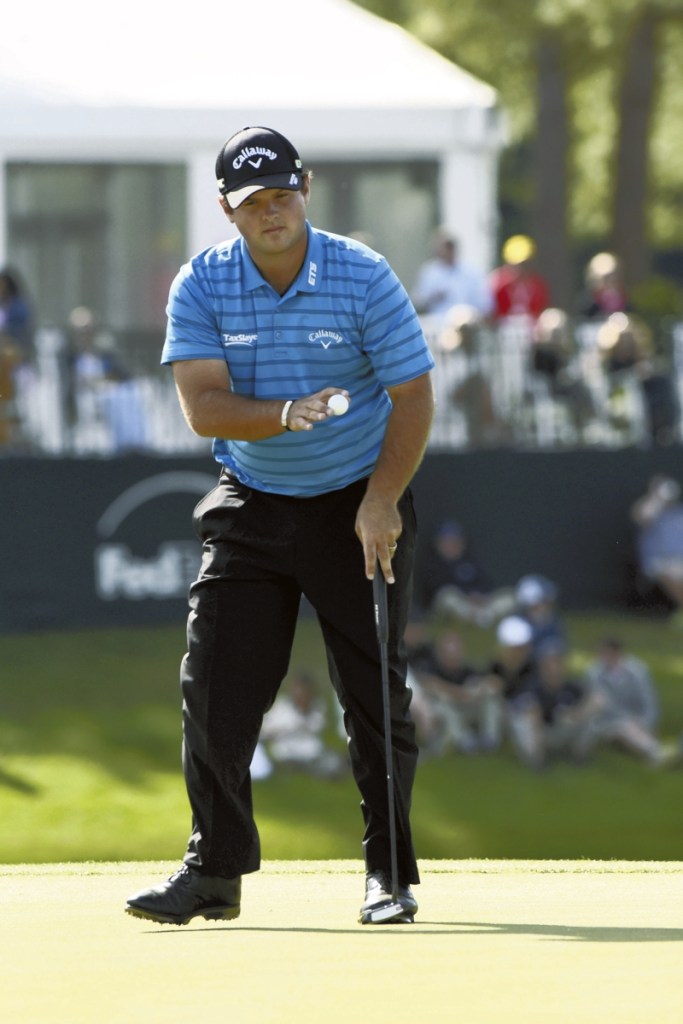 Patrick Reed reacts to the crowd after birding the 18th hole during the third round of the Wells Fargo Championship golf tournament at Eagle Point Golf Club in Wilmington, N.C., Saturday, May 6, 2017. (Ken Blevins/The Star-News via AP)

WILMINGTON (AP) — Patrick Reed was befuddled by the wind when his golf ball was in the air, and by the book when his ball was on the green. He went back to playing aggressively, and it gave him the lead Saturday in the Wells Fargo Championship.

But not by much.

Reed hammered a wedge into 4 feet for birdie on the 17th, and finished with a two-putt birdie for a 5-under 67 to match the low score of a blustery third round. It was good enough for a one-shot lead over Alex Noren of Sweden and Jon Rahm of Spain going into the final round at Eagle Point.

But with one round remaining, the tournament was wide open, even for Dustin Johnson.

The world’s No. 1 player, competing for the first time since his slip down the stairs bruised his back and knocked him out of the Masters, rallied for a 67 and was four shots out of the lead as Johnson goes for his fourth straight PGA Tour victory.

In a scramble for the top — 18 players were separated by four shots after 54 holes — Reed finished strong.

His lone bogey came at the 14th when he tried to finesse a 51-degree wedge in the wind and hit 40 feet by the hole, leading to a three-putt. He had the same yardage (134) on the 17th hole and learned from his mistake. He asked for the 57-degree wedge with the idea of smashing it.

“I’ll hit it hard and hopefully be able to get it up there, and it ended up working out perfectly,” Reed said.

He also quit relying so much on his book that shows every tiny movement on the green — the one the USGA and R&A might ban — to avoid information overload. He only asked his caddie to help read a putt on two occasions (and made them both).

“I used to just read putts myself and kind of step up, go first-instinct and knock it in,” Reed said. “I’ve done that pretty well all week. I have my green-reading book with me just to kind of confirm, not really to go off of it, just to make sure I’m seeing what the book is saying and just kind of going from there.”

Noren, a four-time winner on the European Tour last year who is No. 12 in the world, missed a 5-foot birdie putt on the final hole that would have tied him for the lead. He had a 69. Rahm closed with a birdie for a 69.

The scores have been so tight that when the cut was made Saturday morning because of a three-hour rain delay, only seven shots separated the 36-hole leader (Francesco Molinari) from the players who made the cut on the number.

One of those who narrowly made the cut was Johnson, playing for the first time in six weeks. He made a pair of bogeys late in the second round for a 75 that ended his streak of 13 consecutive rounds at par or better. He wasn’t making up much ground — nine straight pars after starting on No. 10 with a birdie — until hitting it close enough for tap-ins and ended with a 10-foot birdie putt that gave him a 67. He was four shots behind, along with Phil Mickelson, who had a 69.

And they had lots of company.

Seung-yul Noh also had a 67, the low score of the third round, and was at 6-under 210 along with Molinari (72), Brian Harman (70) and Vaughn Taylor (70). Six players were another shot behind. Graeme McDowell joined the group at 4 under that included Mickelson and Johnson.

Four down after 11 holes at Club de Golf Mexico, Wie twice rallied to tie the long-hitting Yin and won with a birdie on the par-5 20th hole.

Wie will face the third-ranked Jutanugarn, a 19-hole winner over Cristie Kerr in the event that switched from stroke to match play and moved from November.

Wie is winless since the 2014 U.S. Women’s Open. She won the then-Lorena Ochoa Invitational in stroke play in 2009 in Guadalajara for her first tour title.

Jutanugarn lost a 3-up lead to Kerr before finishing off the 39-year-old American with a par — after Kerr missed a 4-footer — on the 19th hole. Kerr won three weeks ago in Hawaii and lost to Haru Nomura last week on the sixth hole of a playoff in Texas.

“The greens here are really hard to read, the speed, everything,” said Jutanugarn, a five-time winner last season. “Cristie hit some really good putts, but they just didn’t go in. … My tee shot was pretty good all day, I just have to work on my putting.”

Hur had two 1-up victories, knocking off top-ranked Lydia Ko in the round of 16 in the morning and edging Shanshan Feng 1 up in the afternoon. Kim beat Karine Icher 5 and 4.

Yin had a 4-up lead after seven holes, and that was the margin after her birdie win on the par-5 11th. Wie won four of the next five holes — two with birdies, and two with pars — to tie it. Yin rebounded to win the par-5 17th, and Wie took the par-4 18th with a par to force extra holes.

“I knew how quickly things could end, so I just kind fought through,” Wie said.

The 19-year-old Yin, from Arcadia, California, is an LPGA Tour rookie after playing last season on the Ladies European Tour.

In the round of 16 in the morning, Wie topped Marina Alex 5 and 4; Yin beat Sandra Gal 3 and 2; Jutanugarn defeated Pernilla Lindberg 5 and 3; Kim edged Charley Hull 3 and 1; Feng beat Brooke Henderson 1 up; Icher topped Angela Stanford 1 up; and Kerr knocked out Cydney Clanton 3 and 2.

Ko advanced far enough in the tournament to keep the No. 1 ranking.

“I was struggling with ball-striking today and I was not good with my putt, either,” Ko said. “So, those two combinations, it was obviously not very good.”

The event is the LPGA Tour’s first match-play tournament since 2012.

“Normally, a couple guys separate themselves from the pack, but it’s just going to mean it’s going to be more fun on Sunday,” Reed said. “I’m not going to do anything different. I’m just going to go out there and play the same kind of golf I’ve been trying to play — hit fairways, hit greens and let my putter do the work.”

Reed had gone 10 straight tournaments out of the top 10 — including three straight missed cuts — until he showed flashes of getting his game back during the team event at the Zurich Classic last week. He attributed his pedestrian play to “equipment,” which mostly was changing from Callaway to a Bridgestone golf ball.

Noren has experience with the wind, mostly from his college days at Oklahoma State. He was in the lead late until dropping a shot on the 16th and failing to birdie the par-5 18th.

“I’m not trying to look too much for a win, just to play the way we wanted to and get the help from my caddie around here and we’ll see what happens.”

Rahm had a wild finish. The 22-year-old Spaniard, already a winner at Torrey Pines this year, was just short of the 18th green when he stubbed his eagle chip and then chipped the next one in for birdie.