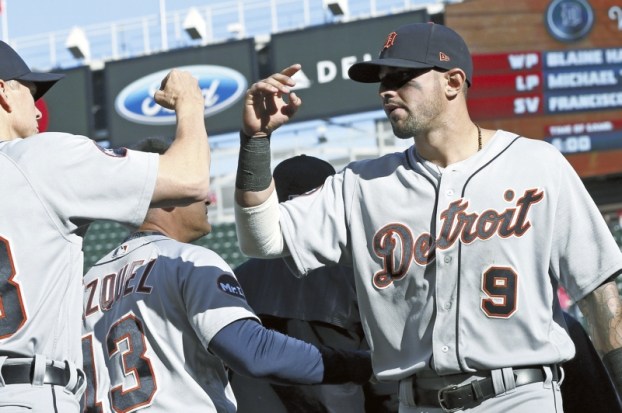 Jones hit in face by pitch, Tigers and Twins scrap

MINNEAPOLIS (AP) — Not long after Detroit outfielder JaCoby Jones got hit in the face by a pitch, the Tigers and Minnesota Twins were nose-to-nose on the field.

Jones was hit in the mouth by a 90 mph fastball from Minnesota reliever Justin Haley in the third and left the game under his own power. Two innings later, Detroit starter Matthew Boyd threw behind Sano, who pointed his finger toward the pitcher and yelled out at the mound.

McCann intervened and appeared to put his mitt in the face of Sano, who let fly with a right hand and shoved McCann away.

“I don’t want to talk about what he said, but he touched me with his glove and I reacted,” Sano said . “It was a glove to the face. They were supposed to eject McCann, too, but I saw they didn’t eject him.”

There was plenty of pushing and shoving near home plate as both benches and bullpens emptied, though there did not appear to be any other punches thrown. Sano and Boyd were both ejected.

“Boyd was all over the place all day,” Tigers manager Brad Ausmus said. “He didn’t exactly have the best command. But I guess there doesn’t have to be a warning, so the umpires made that decision.”

McCann said he took issue with Sano gesturing toward the mound and merely wanted to protect his pitcher.

“I didn’t know what he was going to do,” McCann said. “I saw him wag his finger at my pitcher and, as far as I’m concerned, you’re not going to do that while I’m catching. So I just wanted to step in between and prevent anything from happening.”

Jones was hit in the left side of his mouth by a third-inning pitch from Haley. Jones went down but sprang to his feet, tossed his helmet away and ran up the third base line in the direction of the Tigers’ dugout.

He was met by Ausmus and a trainer, who put a towel to Jones’ bleeding mouth. The rookie center fielder was escorted to the bench and later taken to a hospital for a CT scan.

“It was a nasty split lip. They think his teeth are all intact,” Ausmus said , adding that a trip to the disabled list is a possibility.

After the game, Minnesota put Haley on the 10-day disabled list with right biceps tendinitis.

“Our pitcher, he didn’t intentionally hit him in the face,” Sano said. “Nobody wants to hit anybody in the face. If that team is saying we’re trying to hit somebody, it would be in the leg or something but never in the face.”

Nicholas Castellanos and Justin Upton each hit a solo home run for the Tigers, who put star slugger Miguel Cabrera on the disabled list before the game and used five relievers after Boyd was tossed. Blaine Hardy (1-0) won in relief, and Francisco Rodriguez earned his sixth save in eight chances this season.

Michael Tonkin (0-1) walked Mikie Mahtook leading off the sixth inning, and Castellanos followed with an RBI double to put Detroit on top 4-3. McCann added a sacrifice fly later in the inning.

Pinch-hitter Jason Castro hit a solo homer in the ninth, but Rodriguez closed it out by striking out Joe Mauer with a runner at first base.

Both starting pitchers struggled with their control, and the teams combined to use 13 relievers. Twins left-hander Adalberto Mejia walked three but struck out six in 2 2/3 innings. Meanwhile, Boyd walked three batters in the first two innings before settling down to retire eight of the next nine Twins.

After the game, the Twins optioned Mejia to Triple-A Rochester, as their upcoming schedule allows them to use four starting pitchers. In three April starts, the 23-year-old lefty allowed six earned runs, walked eight batters and struck out 10 in 9 1/3 innings.

“I’m just trying to work on my mechanics and get back to what I was doing,” Mejia said. “I’m trying to make that adjustment.”

Tigers: Cabrera (strained right groin) was placed on the 10-day DL. He was injured while diving for a grounder Friday night.

Twins: INF Ehire Adrianza (strained oblique) played shortstop and went 3 for 5 and scored three runs Friday in the first game of his rehab assignment with Class A Fort Myers.

Tigers: RHP Michael Fulmer (1-1, 3.60 ERA) goes to the mound Sunday seeking his second victory over the Twins this month.

Twins: In his last outing, RHP Kyle Gibson (0-2, 6.91) pitched into the sixth inning for the first time this year. He’ll face the Tigers 11 days after they tagged him for five earned runs in four innings at Comerica Park.