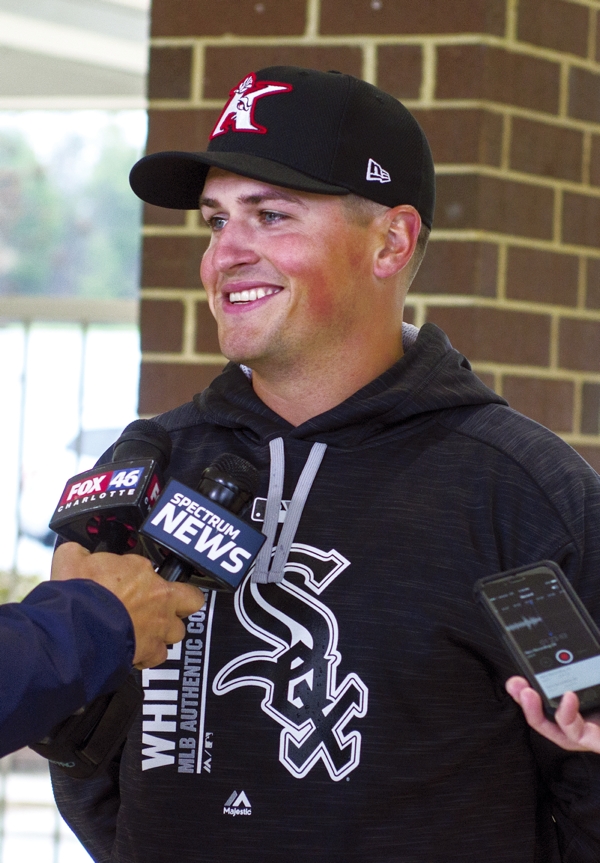 Twitter photo …
Kannapolis Intimidators’ manager Justin Jirschele, shown during his playing days at Double A Birmingham. At 26, Jirschele is the youngest manager in the minor leagues.

KANNAPOLIS — At 26 years old, Justin Jirschele would be the oldest player on the Kannapolis Intimidators this season.

But Jirschele is not a player. He’s the manager — the youngest at the position in all of minor league baseball.

Drafted by the Chicago White Sox in 2012 out of NCAA Division III Wisconsin-Stevens Point, Jirschele played four years at all levels of professional baseball, including triple A Charlotte in 2014 and 2015. He played briefly in Kannapolis in 2013.

Although Jirschele’s overall stats as a player were decent — .277 batting average and 70 RBI in 184 games — he only hit .176 in 2015 with three different teams, Charlotte, double A Birmingham and then, single A Winston-Salem.

The son of Kansas City Royals’ third base coach Mike Jirschele, Justin was smart enough to see the writing on the wall. He gave up playing and became a coach.

Now the manager, Jirschele met with the media on Wednesday, in preparation for tonight’s home opener against Lakewood.

“It’s great great to be here, especially after the grind of spring training, to get out here under the lights and hear some music at the ballpark,” said Jirschele. “To get back to Kannapolis, just hours away from opening up here, it’s very exciting and a fun time.”

For sure, Jirschele has learned from his father, and doesn’t appear in awe of his new responsibility. But still, how does a 26-year-old become a manager so fast?

“I’m just very fortunate to have the trust from the White Sox to run this club,” said Jirschele. “At the end of the day, I really don’t think about my age. It’s a job, I’ve got a job to do, so I’ve got to come out every day and lead these guys to where they need to be … to help them get better.

“I’d like to think I can relate to what they’ll be going through,” continued Jirschele. “I have an open door policy in my office, so I’ve told the guys that any time you need to come in and talk about anything, whether it’s baseball related or not, come on in and sit down on the couch and we’ll have a nice little chat.”

The Intimidators hope to improve on 2016’s 58-82 record. While developing players is the most important thing in the minor leagues, winning is always better than losing, especially for the fans.

“We’re going to be a fun ball club,” said Jirschele. “We’re going to get out there and make some things happen on the base paths, pitching should be pretty good, and defensively, we’re going to run some balls down. We just have to score enough runs.”

The Intimidators have some players to watch, including second-round draft pick out of Oklahoma, 6-7 pitcher Alec Hansen. After last summer’s draft, Hansen was in Great Falls for seven games (1.23 ERA) before being promoted to Kannapolis.

“You never know how it will pan out on the field, but we like where we’re at right now on paper,” added Jirschele. “And we’re going to come out every single night and compete. When that bell rings, we’re going to be ready to go.”

NOTES: Game time tonight is 7:05 and former major leaguer Darryl Strawberry is scheduled to be on hand for photos and autographs … Jirschele is married to the former Liz Althoff and still resides in the off-season in his hometown of Clintonville, Wisc. … Jirschele talks to his dad “almost every day,” he says. “I’m sure, once we get going here with games, we’ll be talking a lot more, too.”

By Doug Ferguson AP Golf Writer AUGUSTA, Ga. (AP) — The Masters should be the easiest to predict of golf’s... read more