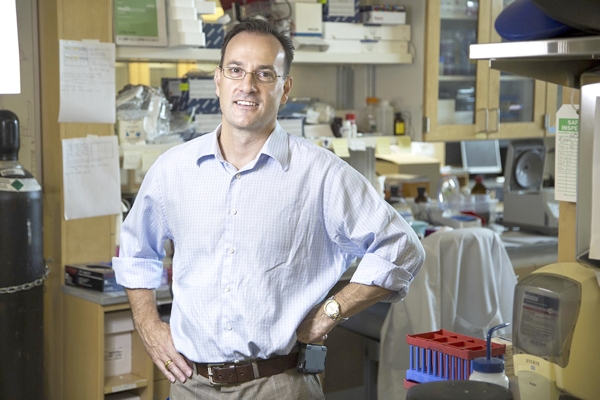 Simon G. Gregory, PhD, associate professor of medicine and medical genetics at Duke photographed in his lab on Friday August 9, 2013.

DURHAM and KANNAPOLIS —A person carrying variants of two particular genes could be almost three times more likely to develop multiple sclerosis, according to the latest findings from scientists at Duke Health and The University of Texas Medical Branch at Galveston.

The finding, published in the March 23 issue of the journal Cell, could open the way for new tests to identify those at greatest risk of MS and autoimmune disorders, as well as the development of novel drugs, the researchers said.

The research used biospecimens from the MS cohort of the Measurement to Understand the Reclassification of Disease Of Cabarrus/Kannapolis (MURDOCK) Study. The MURDOCK Study is Duke Health’s longitudinal clinical research study based at the North Carolina Research Campus in Kannapolis. The MURDOCK community registry and bio-repository includes more than 12,000 participants and nearly 460,000 biological specimens.

Multiple sclerosis is a major cause of neurological disease in younger adults between the ages of 20 and 50 and disproportionally affects women. The disease causes the body’s own immune system to attack nerve cells in the spinal cord and brain, causing problems with vision, muscle control, balance and basic body functions, among other symptoms, and could lead to permanent disability.

While treatable, current MS therapies have adverse side effects, as they focus on slowing the progression of the disease through suppression of the immune system. There is no cure for MS.

“Our study identifies an interaction with a known MS risk gene to unlock a new MS candidate gene, and in doing so, establishing a novel mechanism that is associated with the risk of multiple sclerosis and other autoimmune diseases,” said co-lead author Simon Gregory, Ph.D., director of Genomics and Epigenetics at the Duke Molecular Physiology Institute and principal investigator for the MURDOCK MS Study.

Gregory — along with colleagues at UTMB, the University of California, Berkeley, and Case Western Reserve University — found two particular DNA variants that appear to play a role in MS. One of these variants is in IL7R, a gene previously associated with MS, and the other in DDX39B, a gene not previously connected to the disease.

When the two are present in a person’s genetic code, their interaction can lead to an over-production of a protein called sIL7R. That protein’s interactions with the body’s immune system plays an important, but not completely understood, role in MS.

Researchers used MURDOCK biospecimens to examine the chromosomal differences between DDX39B and IL7R.

The researchers said this new information could potentially be used to craft new tests to diagnose multiple sclerosis, or to improve therapeutic toolkits to fight MS and other autoimmune disorders.

“One could envision how this type of knowledge will someday lead to diagnose multiple sclerosis sooner and, now that we have promising therapies, a doctor could start the appropriate treatment more quickly. It is not out the realm of possibility to imagine a path for screening for other autoimmune diseases such as type 1 diabetes,” said co-lead author Mariano Garcia-Blanco, M.D., Ph.D., professor and chair of the department of biochemistry and molecular biology at UTMB.