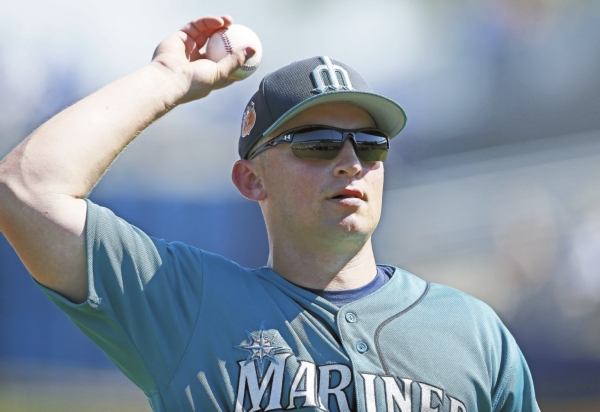 PEORIA, Ariz. (AP) — Kyle Seager is starting to feel like one of the old guys in the Seattle Mariners clubhouse.

That really has nothing to do with his age — the third baseman is only 29. It’s just that he’s been such a constant with the Mariners, now going into his seventh major league season with the team that drafted him.

“I think from when I got here, it’s just me and Felix … the only two that are left basically” Seager said.

Six-time All-Star right-hander Felix Hernandez is the only other player that was on the roster then — in 2011, Seager’s rookie season — and now. King Felix and Seager are also among only eight players still on the Mariners’ 40-man roster that were there when Jerry Dipoto took over as general manager only 18 months ago.

Seager hit .278 with 30 home runs and 99 RBIs last season, all career highs. He has averaged 158 games over the past five seasons, and that is how many he played last year.

“He’s one of the more underrated players in the league,” second-year Mariners manager Scott Servais said. “I’ve come to appreciate him maybe more than anybody, just the ability you can write his name in the lineup every day and you’re going to get a great effort. He’s into the game, he’s a great teammate, he does everything the right way.”

After all the changes in team leadership and the roster, Seager senses a much different vibe for the team that has MLB’s longest current postseason drought. The Mariners, who finished second in the AL West last season, haven’t been to the playoffs since making it to the 2001 AL Championship Series.

“We have a good presence between older guys that have done it and established themselves, and young guys that are bringing a lot of energy and upside,” Seager said. “I think we’re as a whole in a very good position.”

Seager also has a willingness to be a resource for the younger players, who Servais said can learn from the third baseman’s consistency and how he has fun playing the game.

“Kyle’s very down to earth, he’s easy to talk to him,” Servais said.

“He’s earned it,” the older Seager said. “I couldn’t be prouder of him.”

A Gold Glove winner in 2014, Seager made defense a priority after making a career-high 22 errors last season, the most by an AL third baseman. Many of those were on groundballs to his left, and he has spent plenty of time this spring focusing on his footwork with Mariners bench coach Tim Bogar.

“I do feel like I got to balls that I hadn’t gotten to in the past, but at the same time I had errors that I shouldn’t have had. It was a very strange season in that regard,” he said. “Ideally, hopefully this year I put it all together. … It doesn’t get as much glamour as going and hitting and doing other stuff, but you look at the teams that are playing in the postseason, you’ve got to be able to catch the ball.”

Seager said he’s not afraid to make adjustments or be uncomfortable when trying to improve any aspect of his game.

While acknowledging that it wasn’t a typical season for Seager on defense, Servais said there were plenty of great plays. One that stands out was a game-saving diving backhanded stab with the bases loaded, when Seager then got up and threw across the diamond for the final out in a 4-3 win over the Los Angeles Angels.

“He’s awesome going to his right,” Servais said. “I think he just wants to get more efficient going the other way.”

Seager is from Kannapolis and played at Northwest Cabarrus High School and UNC-Chapel Hill.