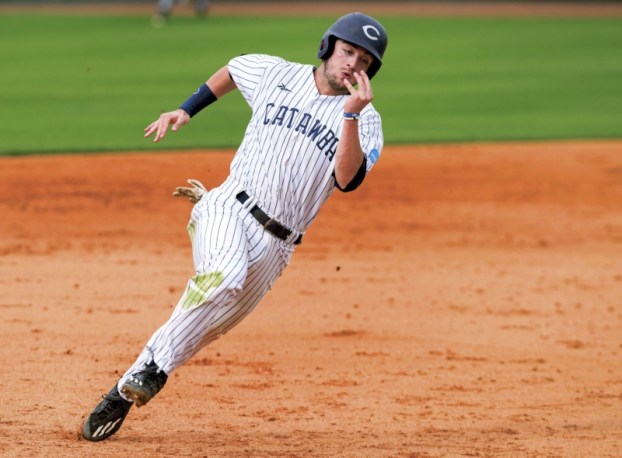 SALISBURY —  Highs and lows, ups and downs, slumps and streaks. They’re all part of a long baseball season.

Catawba experienced the worst and best of times on Saturday at Newman Park, looking bad in a 10-1 loss to Coker in the opener of a South Atlantic Conference doubleheader, then looking sharp behind freshman lefty Hunter Shepherd in a 13-2 win in the nightcap.

“There’s a reason they talk about averages,” Catawba coach Jim Gantt said after the Indians took the series two games to one and moved into first place in the SAC. “You’ll have good days and bad days. You’re going good, but then they see a weakness, and the scouting report starts to get around. Then all of a sudden you’re in a slump.”

Gantt’s words applied specifically to sophomore outfielder Luke Setzer. Winner of back-to-back SAC Player of the Week awards recently, Setzer suddenly crashed into an 0-for-14 nosedive that included seven straight strikeouts. That’s the nature of baseball, and it can be cruel and humbling.

But Setzer snapped out of his slide with a couple of hits in Friday’s win to open the Coker series, and his two-run homer in the second inning ignited Catawba’s romp in Saturday’s nightcap.

“Coach Gantt told us when we were hitting .375 as a team that he hoped that it would last, but he knew it wouldn’t last,” Setzer said. “No one stays that hot. The law of averages just won’t allow it. I got into a slump by jumping at pitches, by not being as patient as I had been. Today I just tried to get back to doing my job, helping the team. The results were good.”

The results were better than good. Setzer went 4-for-4 in Saturday’s second game, shoving his batting average back up to .463. The former East Rowan standout leads Catawba with 44 hits, 35 runs scored and 10 homers.

“Everyone is trying to make adjustments to Luke now, so how successful he’s going to be depends on him making adjustments to their adjustments,” Gantt said. “He’s still going to have his slumps, everyone does, but it’s up to him to make those slumps as short as possible.”

“When it gets tough, you can’t give in, but we didn’t grind out at-bats and it was almost like we laid down for them,” Setzer said. “Coach Gantt put a fire in us for the second game and we went out and won the series.”

Shepherd  did his part, with five efficient innings, fanning five with one walk.. His teammates played errorless ball behind him, and Shepherd got seven outs on groundballs.

“We were making all the plays, so I relied on my defense,” Shepherd said. “I just went out there with the goal of keeping the team in the game, and then we started scoring runs.”

Catawba settled it with a five-run second and made it a laugher with a six-run fifth. Shepherd improved to 2-0 and Catawba improved to 11-1 in the friendly confines of Newman Park.

Morrison caught both games of the doubleheader. That’s probably Catawba’s thinnest position, but with starting catcher Zac Almond out with the flu. Morrison stepped in and did the job.

“When we were coming back from Florida earlier this week, it sounded like the whole bus had the whooping cough and we were together for 10 hours, making everyone worse,” Gantt said. “Usually at this time of year you’re only worrying about playing good baseball, but we’ve had guys going to the doctor, trying to get well.”

Catawba (15-7, 7-2 SAC) got well in Saturday’s second game. It was a shaky week, with two ugly losses in Florida, but the Indians finished it with their third straight series win.

“We don’t need heroes,” Gantt said. “We just need guys to do their jobs, and then pass it on to the next guy. In the second game, that’s what we did.”