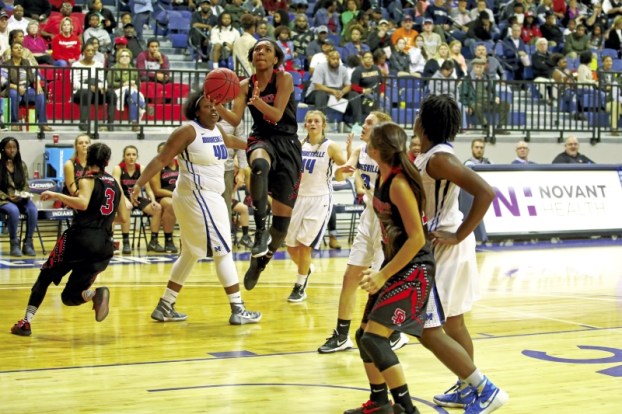 “When we’re hot, we’re hot,” Good said after netting 19 points. “Tonight, we got hot in the fourth quarter and stayed hot.”

Good’s virtuoso performance capped an unlikely comeback for Mooresville (7-3), which advanced to tonight’s semifinal round against No. 1 seed Salisbury. The Blue Devils trailed by 15 points early in the fourth period, yet somehow survived.

“I went from feeling sick to my stomach to feeling OK,” coach Andy Sparks said. “For a while it looked like our girls didn’t want to be here. But we turned it on and realized this was a game we could steal.”

They did. Just when everything seemed to be in order for fifth-seeded South (5-6), disorder prevailed. It began when leading scorer Janiya Downs (also 19 points) fouled out with 6:24 remaining and continued when the Raiders went more than five minutes between fourth-quarter field goals.

“We’ve got to realize we’re up 15 points, not down 15 points,” said disappointed South coach John Davis. “You hold the ball, you take layups, you don’t force the issue. You go to the free throw line and knock them down. The game is simple. We didn’t make it simple.”

They could have. South had carved out a 37-24 lead after three quarters and extended it when freshman forward Whitley Arnott snagged an offensive rebound and hit a put-back with 6:20 to play. “Then we started forcing things,” Davis said. “Yeah, we lost one of our best players when Janiya got her fifth foul, but that’s no excuse. The rest of the girls have to step up and win the game.”

Instead, South resembled a high-wire performer with vertigo in the waning moments. It lost its balance, then its focus and finally its first chance in 15 years to play for the title. Mooresville more-than-doubled its output with 25 points the last six minutes, sinking four 3-pointers and pulling away.

“The lid finally came off the basket,” Sparks said. “And when the first one goes in, you start to believe the next one can too.”

Good didn’t need any encouragement. Her 3-ball from the top of the key drew Mooresville within 39-30 and her driving layup down the lane made it 40-36. Teammate Taylor Cullen’s 3-pointer from the left corner inched the Blue Devils within two with a minute to play before Good pushed them ahead, 44-43, with another home run ball from the top of the wheel with just 50 seconds remaining.

It was more than enough for the Blue Devils, who forced 10 South turnovers in the fourth period. “Her range is nearly unlimited,” Sparks said. “She doesn’t care about situations. A shot’s a shot to her.”

And a dagger’s a dagger to South. “The third quarter was everything we wanted and then some,” Davis lamented. “That should have translated into the same thing in the fourth quarter. Instead, we were impatient and it jumped up and bit us.”