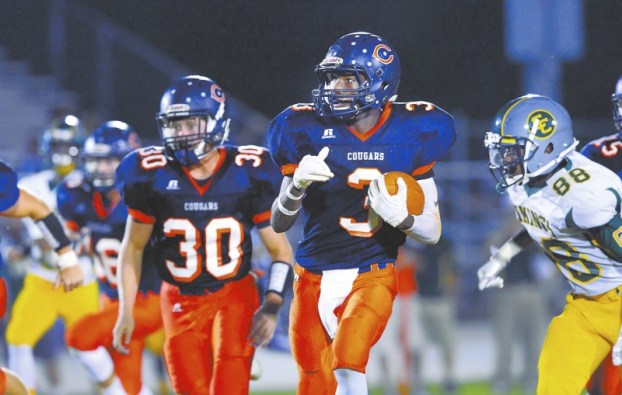 Prep football notebook …
They both finished 4-8, but Carson and East Rowan capped their seasons with efforts in the first round of the playoffs that will be memorable.
After a long trip to the mountains, Carson lost at Canton Pisgah, 20-13.
“We should have won,” Carson coach Joe Pinyan said. “Owen White was super, and our backs and receivers did a great job of carrying out our game plan.”
Carson, which normally runs the ball 80-90 percent of the time, surprised Pisgah by operating mostly from a spread offense. White put the ball in the air 28 times. The junior QB had a career-high 15 completions and threw for a season-high 175 yards. He also was Carson’s rushing leader with 42 yards.
White ran for a touchdown and threw a touchdown pass to senior Brenden Westbrook. Westbrook, mostly a cornerback, has managed to score five touchdowns this season. He’s scored on offense, defense and special teams.
The most passing attempts White had all season before Friday night was 16, and Carson had yet to throw for 100 yards in a game.
The downside of putting the ball in the air is the danger of interceptions, and White had two passes picked off by Pisgah (11-1) in the red zone. Those picks prevented a monumental upset.
“The second interception came on a pass that would’ve given us the lead in the fourth quarter if we’d completed it,” Pinyan said.
Pinyan said there also was a fourth-quarter fumble by Pisgah that was ruled down.
“I’m not so sure about that (call) after seeing the film,” Pinyan said.
Carson’s season is over, but the Cougars who had frustrating losses to South Rowan and Northwest Cabarrus, the bottom two teams in the South Piedmont Conference standings, can feel pretty good about the way they went out.
“The kids gave us their best effort of the season,” Pinyan said.
•••
White has 1,996 passing yards in two seasons. Devin Youker (5 catches, 38 yards) and Clayton Gilmore (4 catches, 37 yards) had their biggest receiving games of the season at Pisgah.

East Rowan
East’s 60-40 loss at Shelby Crest was a strange one.
Out-sized and out-manned, East still led, 6-0, after a quarter and managed to outscore Crest, 34-33, in the second half. The Mustangs just couldn’t overcome a second quarter in which they were pummeled, 27-0.
East’s defense had an unusual outing. The Mustangs allowed a whopping 657 yards — 387 passing, 280 rushing — but East’s defense also put 18 points on the board on fumble return TDs by Raequan Gibson, Deiontae Gallman and Jake Gregory.
East had three defensive touchdowns for the season coming into the game and doubled that total.
•••
Speaking of unusual, East quarterbacks Justin Smith, a sophomore, and Tate Houpe, a senior, both finished in the top five in the county in passing. They combined for almost 1,500 passing yards and 18 touchdowns.
•••
East had little success on the ground early against Crest and went almost exclusively to the air after getting behind in the second quarter.
Max Wall had only 12 rushing yards on Friday, but he squirmed past 4,000 for his career. He’s only the seventh player in Rowan County history to reach that lofty plateau.
Wall had three receptions against Crest and finished his career with an even 100.
Wall also threw the ball some in his career, especially his junior year. He has 801 career passing yards and ranks in the top 15 all-time in Rowan County history in total offense (rushing yards plus passing yards).
•••
Senior defensive back Wesley Porter had a huge final game for the Mustangs.
He had two more blocked kicks, made numerous tackles and caught two touchdown passes.
He also had an 80-yard kickoff return called back by a penalty.
Porter was informed after the game by coach Kenneth McClamrock that he was named to the All-South Piedmont Conference team for the third straight season.
•••
Previews of the Crest at West Rowan, North Rowan at Brevard, and A.L. Brown at Davie County games will be in Friday’s edition.