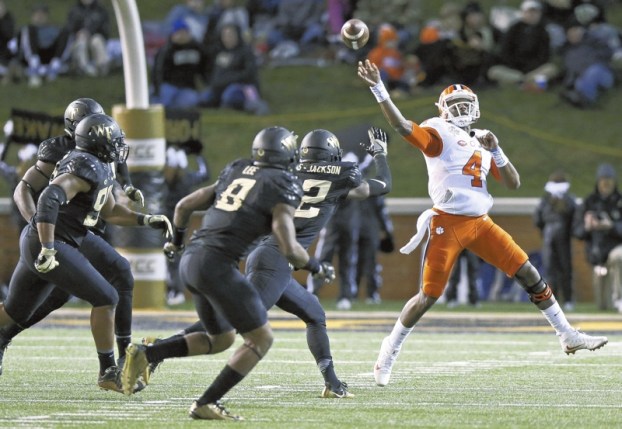 Clemson's Deshaun Watson (4) throws a pass under pressure from Wake Forest players during the first half of an NCAA college football game in Winston-Salem, N.C., Saturday, Nov. 19, 2016. (AP Photo/Chuck Burton)

WINSTON-SALEM (AP) — Deshaun Watson rushed for two touchdowns and threw for another score, and No. 5 Clemson clinched a spot in the Atlantic Coast Conference title game by beating Wake Forest 35-13 on Saturday night.

Wayne Gallman rushed for a season-high 161 yards and two touchdowns, including a 42-yarder on fourth-and-inches that started the scoring for the Tigers (10-1, 7-1, No. 4 CFP).

Playing with something to prove after a last-second loss to Pittsburgh was its first in the regular season in nearly two full years, Clemson reeled off touchdowns on its first four possessions to take a 28-0 lead and then essentially went into protection mode while holding the Demon Deacons to 197 yards — its fewest since the opener against Tulane.

One mitigating factor: A persistent northerly wind that gusted at nearly 30 mph. Clemson’s starters scored four of their five touchdowns with the wind at their backs, but had just 185 total yards in the second and third quarters — when those gusts were in their faces.

Watson was 23 of 33 for 202 yards and sandwiched a pair of short scoring runs around a pretty 15-yard touchdown pass to Mike Williams, checking out after Gallman’s second TD with 10:50 to play.

Clemson: Despite that lull midway through the game — which could be rationalized by the effects of the wind — there was no reason for concern for the Tigers, who certainly looked like the ACC’s most playoff-worthy team while stripping all the drama from this one early. Clemson had 192 total yards and 21 points in the first quarter.

Wake Forest: Giving a redshirt freshman quarterback his first start against one of the ACC’s toughest defenses — not to mention, one carrying a grudge after giving up 43 points last week — is hardly a recipe for an upset. Kyle Kearns replaced John Wolford, who was in uniform but did not play with what team officials said was an ankle injury, and was 7 of 18 for 126 yards.