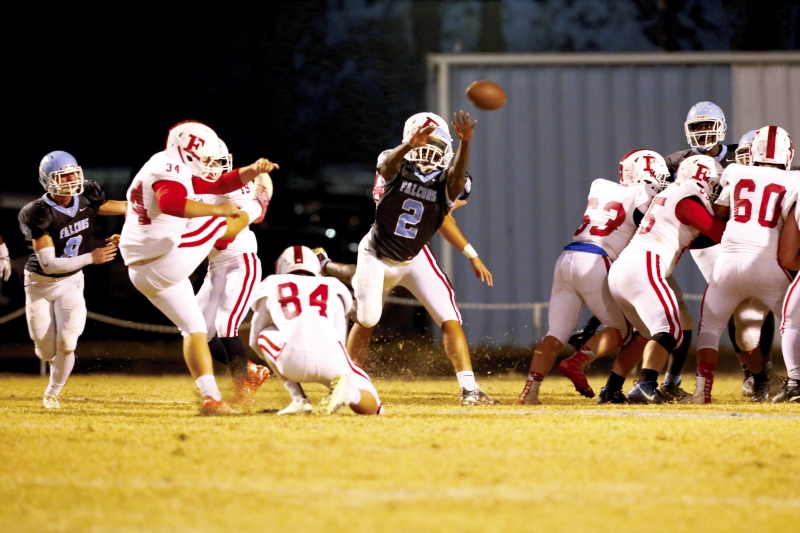 James Sipes/for the Salisbury Post West Rowan’s Paris Hillie stretches out to block a field goal attempt as time expired in the first half. Kam Caldwell (not shown) picked up the football and raced 85 yards for a touchdown on the play in the Falcons' 33-13 win over Morganton Freedom last night.

MOUNT ULLA —West Rowan coach Joe Nixon knew this assignment was no easy “A” — and he was right.

Despite its outward appearance, the Falcons’ 33-13 win against shorthanded Freedom on Friday took some doing.

“If it’s a program like Freedom, with all that tradition, you know it’s not going to be easy,” Nixon said after host West (9-3) opened the 3A state playoffs with a tougher-than-it-looked  victory. “Our guys responded with a business-like mentality. Now the good news is we’ll be practicing on Thanksgiving morning.”

That because West, a No. 2 seed out of the Midwest region, has earned a second-round match with third-seed Crest next Friday. “He’s been saying that all year,” receiver Kortez Weeks said. “Anything to get to Thanksgiving break. Now we’re there.”

The Falcons are there in part because Freedom (6-6) showed up without a dozen or so regulars who were suspended following a Nov. 4 incident. And because they used a circus of big plays to score five touchdowns in the first half. And because their defense played another signature game, forcing two first-half turnovers and bending but rarely breaking against Freedom’s never-before-seen triple option.

“In order to give ourselves a chance we needed to run a little option at them,” Patriots’ coach Brandon Allen said after Freedom braided 60 running plays with six passes. “But West Rowan was tough up front. And they made adjustments after the first half and that made it even tougher.”

West had to rally from behind after Freedom took the opening kickoff and marched 84 yards in seven plays — all on the ground — for the game’s first touchdown. It came when senior senior Bailey Ragle — a wide receiver in quarterback’s clothes — sprinted 45 yards on a draw play just 3:14 into the game.

“That guy was hard to bring down,” said West senior Kam Caldwell. “He played like he wanted to win. They all did.”

West tied the score on its first possession, capped when running back Jovon Quarles took a handoff from QB Payne Stolsworth and motored 41 yards into the end zone. Quarles ran like he’d been dipped in grease, shucking defenders left and right for 114 first-half yards and a pair of TDs.

“We try to get him in space, get him going early,” said Nixon. “In our last game (a 27-7 SPC loss to Hickory Ridge) we didn’t run the ball very well. So we challenged him for two weeks to get loose and get going.”

“The defense did their job tonight,” Vera said. “That fumble play happened so quick. Someone forced it out, I saw it in the air and just dove for it.”

In the second quarter, Freedom sailed into a squall and West poured it on like clam sauce on a plate of linguini. The Falcons pushed their lead to 20-7 when Weeks outmaneuvered two defenders and Stolsworth threaded a 16-yard scoring pass with 7:41 remaining in the half. Then Quarles squared his shoulders and bulldozed into the end zone on a 3-yard run. A Stolsworth interception gave the Patriots a chance to trim their deficit late in the half — until a last-second field goal attempt was blocked by Paris Hillie, confiscated by Caldwell and returned 85 yards for a touchdown that put the game out of reach.

“The ball was in the air,” Caldwell reported. “So it was just natural instinct to catch it and start running.”

He ran like an energized Forest Gump, down the left sideline and into the end zone, providing a 33-7 halftime lead.

“Even then, (Nixon) told us we still had work to do,” said Weeks. “He told us to come out in the second half, play better and finish the game.”

They did. Maybe Caldwell said it best when he offered, “You do your job and plays will happen. That’s what happened here.”

NOTES: Crest (9-3 with two shutouts) has won four of its last five games and advanced with a 60-40 win against East Rowan. … Ragle finished with 160 yards rushing on 30 attempts. … There were only two accepted penalties, both against Freedom. … West junior Brandon Wallace recovered a fumble deep in Falcons’ territory to thwart a second-period scoring threat.