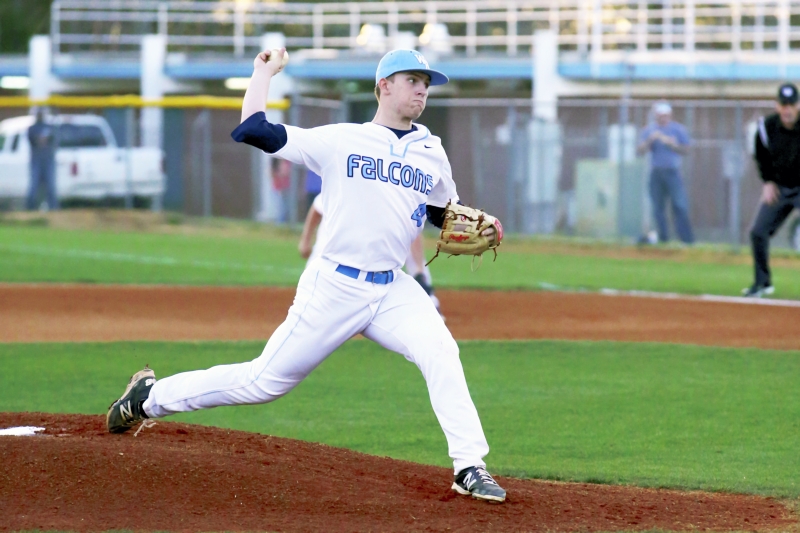 MOUNT ULLA — Brett Huffman was a fine hitter and first baseman for three college teams, and his prodding helped his kid brother, Austin Love, now a West Rowan senior, become a pitcher good enough to sign with the University of North Carolina Tar Heels.
“I’m 8 years older than Austin,” Brett said. “I can remember playing basketball against him in the driveway. I was 12 and he was 4, but I never took it easy on him. I was going to try to beat him, 21-0, every time.”
That helps explain where Love’s competitiveness came from.
In time, Huffman, who swung a bat well for Catawba, Catawba Valley Community College and UNC Pembroke, could see that his little brother’s ceiling was going to be higher than his own, and he couldn’t be any prouder.
“I went to his first Little League ballgame and Austin hits two homers,” Huffman said. “I never hit a home run until I was a sophomore in high school.”
About 100 friends, family and teammates gathered around Love as he signed with UNC on Thursday in West Rowan’s media center. The center of attention was the quietest one there. He still prefers the pitcher’s mound to a microphone, prefers to leave the speeches to others, but his deeds speak volumes for him.
Carolina blue balloons hung in the air above Love as he signed, and his hungry friends virtually inhaled boxes of Carolina blue doughnuts.
There were a lot of pictures on display of Love at various stages of his career including one of him wearing a UNC outfit when he was still Little League age.
“Carolina was always the No. 1 choice, always where I wanted to go,” Love said. “Some members of my family really liked Carolina, and I guess it was just natural for me to want to go to there.”
What makes Love special enough to play at Carolina?
There’s the right arm, obviously. He throws 90 mph now, and there’s more velocity to come.
There’s the frame — 6-foot-3, 200 pounds. Strong and lean, rather than strong and thick.
He’s an athlete, for sure. He came out for the West basketball team as a junior, became a starting forward and averaged a double-double. He was Honorable Mention for the all-county team.
“Baseball is his No. 1 thing, obviously, but we love that he came out and played for us,” West basketball coach Mike Gurley said. “This is an era of specialization, but at a school our size, we need our best athletes to play multiple sports. Austin showed us that he’s someone who will just give himself to a team, give everything he’s got. He worked to get better every single day.”
Seth Graham was hired as West’s baseball coach prior to Love’s sophomore season. Love played a little on the varsity as a freshman, going 1-0 in three appearances.
“I’d heard a lot about the kid, but I tried to have an open mind and a clean slate with everybody,” Graham said. “We had (2014 Rowan County Pitcher of the Year) Omar Bautista and we had (Catawba lefty) Bryan Ketchie, but we were playing our first game of the season against North Iredell and I decided to see what Austin could do. Austin pitched great (4 innings, 2 hits, 6 strikeouts), and we knew we could count on him after that.”
Love went 5-2 that season with 53 strikeouts in 41 innings.
“That first game on opening day, it was a little overwhelming,” Love said. “But I got more comfortable.”
One of the people who saw Love pitch as a sophomore was Don Hutchins, a businessman whose passion is the South Charlotte Panthers showcase team, which attracts elite players from a wide area. In the showcase world, the Panthers are regarded as the best of the best.
“As a sophomore, you could see Austin had the physicality and the skill set to play baseball at a high level,” Hutchins said. “But more important than that, we really looked into his character and his academics because if they become part of our organization we’re going to be marketing them to colleges. Off the field, Austin was off the charts.”
Hutchins brought together players, including Love, from 16 different schools. He calculates that they played 175 games together, becoming not only teammates, but best friends for life. These last two weeks, they’ve been signing in droves.
Love’s appearances with the South Charlotte Panthers led to offers and a verbal commitment to UNC before his junior prep season.
And in that junior season, he showed what all the fuss was about. He was 8-3 with a 1.30 ERA and struck out 115 batters (with 29 walks) in 70 innings. When he didn’t pitch, he was a smooth infielder (second base is probably his best position) and he batted .257 with 15 RBIs, including one loud, game-winning homer against Carson in the South Piedmont Conference tournament final.
“That homer was the most exciting moment I’ve had so far,” Love said.
Love had four games with double-digit strikeouts with a high of 14 and a no-hitter. He helped West win its second straight SPC championship.
“He had one bad outing, but he put us in position to win every other time he went out to the mound,” Graham said. “He misses a lot of bats. He can locate. There are a lot of guys with plus arms, but they can’t locate it like Austin can. And he competes. He loves to compete.”
Love unleashed a wicked curveball last spring that was at least as lethal as his whipping fastball.
“I just kind of learned to throw the curve, messing around and trying different things,” Love said. “It was a pitch I knew I could throw for a strike whenever I needed it.”
Love’s father, Steve, a P.E. teacher, grew up in Kentucky and is still a Kentucky Wildcats fan, but he had no problem smiling on Thursday as his son put on a different hue of blue.