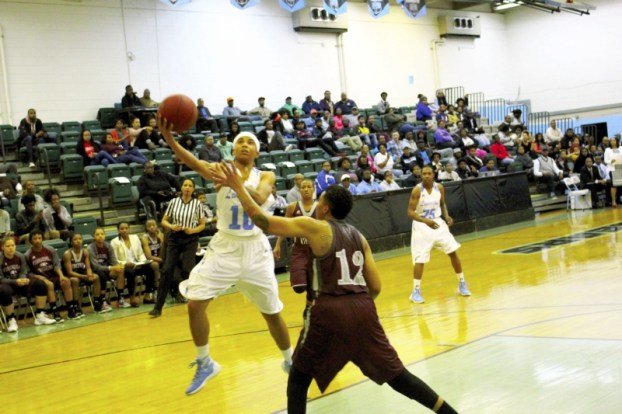 The Blue Bears got 16 points and 17 rebounds from sophomore guard Zena Lovette, but had to go into overtime to defeat Queens, 63-54, at Curry Arena.

The Royals (0-3) tied the contest with 10 seconds left in regulation, when Carmen Richardson made just one of two free throws after getting fouled by the Blue Bears’ Cherokee Cardriche.

In the extra period, broke open a tight battle with just over two minutes remaining. Leading, 54-52, Lovette sank two foul shots and after a Queens turnover, senior guard Brittany Taylor drilled a 3-pointer for a seven-point advantage with 1:51 left.

Queens quickly cut the deficit to 59-54 on free throws from Richardson, but the Royals would not score again during the game’s last 1:41.

Taylor made four clutch free throws down the stretch to cap the scoring, the last two shots coming with 38 seconds remaining. For overtime, Livingstone outscored the Royals, 17-8.

The Blue Bears started well, taking an 18-11 lead into the second quarter. But Queens came alive before halftime, actually tying the game at 25-25 at the 2:02-mark.

Livingstone went cold in the second period, going five minutes without a score before Shannon Buchanan’s jumper in the lane gave the Blue Bears their 27-25 halftime lead with 24 seconds left in the half.

The third period was also nip-and-tuck and Livingstone nursed a 36-35 lead into the final stanza.

Senior guard Bria Patterson hit a 3-pointer with 7:51 left in regulation, putting Livingstone up by six points at 41-35. But the Blue Bears just couldn’t pull away and Queens fought to the end and managed get the contest into overtime.

Lovette made 6-of-12 field goal attempts but all three of her free throws and grabbed 10 offensive rebounds. Following Lovette in the scoring for Livingstone were Taylor with 15 points and Ariana De’Jesus with 13. De’Jesus also pulled down 11 rebounds.

Taylor struggled from the floor, making only 3-of-13 shots, but was a perfect 6-for-6 at the foul line.

KaRaun Hunter, a 6-2 junior forward, made her Livingstone debut with six points.

Both teams had ball-handling issues, combining for 52 turnovers — 31 by Queens.

Silver was hired by Livingstone last spring after Anita Howard departed for Columbus State. Silver had been at Wilmington University in Delaware.

The Blue Bears will be in Savannah this weekend for two games — Clayton State on Friday evening and Armstrong State on Saturday afternoon.

Livingstone opens at home next Tuesday against Claflin at New Trent Gym (5:30).