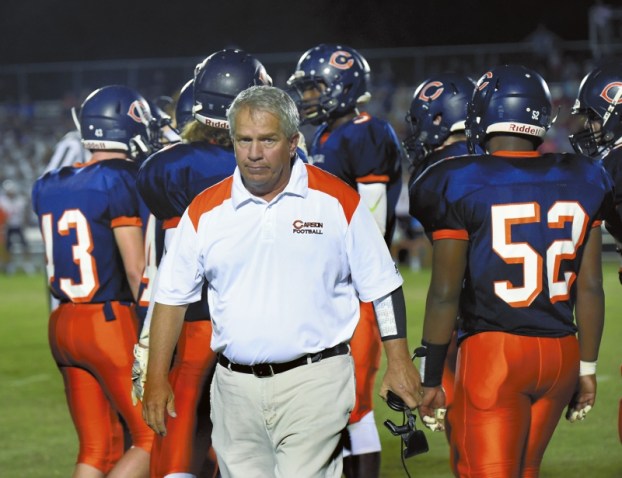 CHINA GROVE — With a textbook display of ball-control offense, the Carson Cougars notched a long overdue win on Friday night that should give them a spot in the upcoming state 3A playoffs.

Clinging to a 7-3 lead over visiting Cox Mill, the Cougars embarked on a 90-yard, 17-play drive that consumed almost nine minutes of the fourth quarter. Senior Bailey Rayfield sealed the deal with a nine-yard burst with just 2:12 left to play as the Cougars snapped a six-game losing skid to beat the Chargers 15-3 on Senior Night.

“We just kept pounding the middle and the blocking was there,” Rayfield said of the decisive drive.” Everything just fell into place on that drive. I just ran through the hole as hard as I could and got a great inside block from (James) Kotcamp”

Quarterback Owen White hit Isaac Bell for a two-point conversion pass to make it 15-3 as the Cougars closed their regular season at 4-7, 3-6 in the South Piedmont Conference. Cox Mill ended their season at 3-8, 3-6.

The game-clinching drive was vintage Joe Pinyan football as the Cougars ran 17 plays that included only two short passes. Rayfield, Kotcamp, Cole Sifford and White did the dirty work inside behind a dominating offensive line.

“I thought we played with a lot of heart on that drive,” Pinyan stated. “That is the way I like it, nice and steady, good and easy. We ate up a lot of clock and kept the ball away from them. That is exactly what we needed there.”

But the Cougar head coach was even more impressed with his team’s defensive effort in the game as they held the Chargers to just 179 yards of total offense while picking off three passes and recovering a fumble. Senior cornerback DJ Fulcher had two of the interceptions including the game clincher in the final seconds. He also had several pass break-ups and a number of key tackles.

“A lot of what motivated me was our game last week (a 49-8 drubbing at the hands of Hickory Ridge), ” Fulcher admitted. “I allowed more touchdowns and more yardage in that game than in my entire high school career. As seniors we just had to redeem ourselves.”

Senior cornerback Brendan Westbrook had the other interception, his fifth of the season but it was his offensive magic at the end of the first half that gave the Cougars a lead they would never relinquish. In the opening half the Cougar offense sputtered with two fumbles, six penalties and under 100 yards rushing. Cox Mill experienced the same issues but finally jumped on top with 3:20 left in the half as kicker John Brosnahan boomed a 49-yard field goal for a 3-0 lead.

Carson finally showed life with less than two minutes left in the half as they reached the Charger 12 on a 16-yard pass from White to Kotcamp. But a penalty moved the Cougars back to the 29 with just 1.6 seconds left in the half, setting the stage for one of the more bizarre sequences of the football season. White pitched to Sifford who pulled up and tossed a pass toward the end zone. But Cox Mill defender Shaal Joseph intercepted the throw at the 10 and sprinted the other way for an apparent 90-yard pick-six back breaker.

The officials, however, called pass interference on the Chargers as well as an ineligible receiver on Carson for offsetting penalties. The result was one un-timed down for Carson at the 29 with no time on the clock and they took full advantage. White rolled right, spotted the 6-3 Westbrook at the goal line and lofted a TD pass to him between a pair of defenders. After a Grayson Owens PAT, Carson had an unlikely 7-3 lead at intermission.

“I was just determined to get open and help the team out on that play,” said the soft-spoken Westbrook. “I think it just gave us our momentum that carried through the rest of the game and helped us get the W.”

White led the offense with 59 yards rushing and 74 yards passing while the running trio of Sifford, Rayfield and Kotcamp combined for 133 yards and a 4.2 yards per carry average, just the way Coach Pinyan likes it.

The Chargers played the game without their star junior quarterback Eric Bone but backup Hunter Toney passed for 62 yards. Halfback Jevon Myers was the workhorse for the Chargers with 86 yards on 19 carries.

Carson will now have to wait a week to confirm their state playoff berth, with pairings slated to be announced a week from today. “We think we are in but we just have to wait and see,” Pinyan said. “We will have a modified practice schedule next week to stay as sharp as we can.”