Ester Marsh column: Half Ironman on the bucket list — check 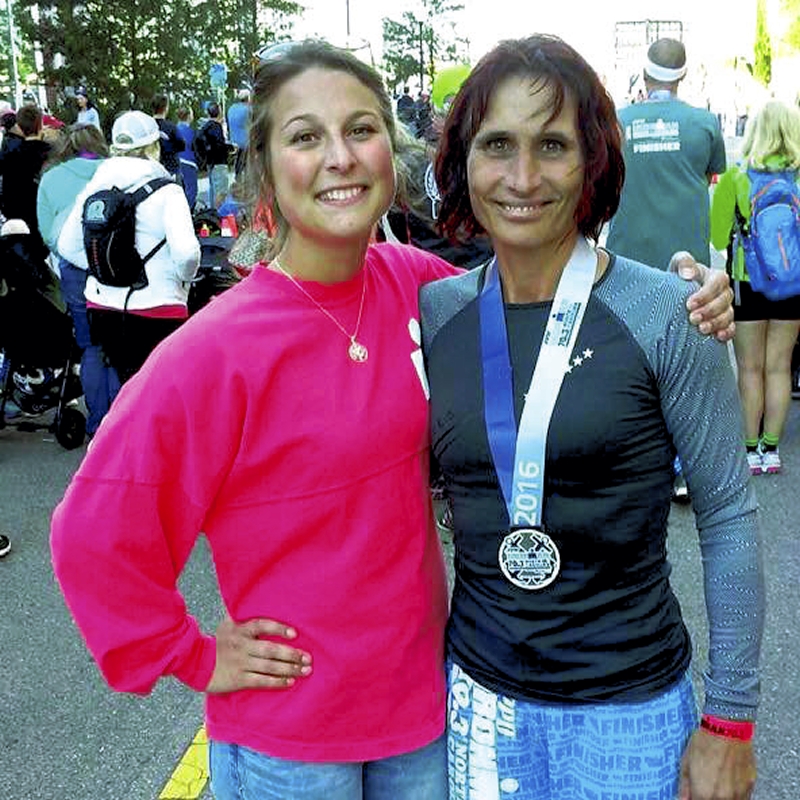 Ester Marsh poses with her soldier daughter Edie Belk after the finish of the half Iron Man. Submitted photo.

Well people, I did it! I finished my half Ironman challenge! A half Ironman is a 1.2-mile swim, 56-mile bike ride and a 13.1-mile run. Yep, all right after the other. A full Ironman would be double those distances. More than 40 weeks ago, I decided to take on this challenge for my 50th birthday this year. Seeing my husband finish his marathon in about 3 hours 30 minutes (which is very good), I noticed people were finishing the half marathon in that same time. They were so happy and I was so proud of those people doing it. I thought to myself, “Why can’t I do something just to finish?”

In the last 10 years, when I started to think about competing, I had a tendency to work so hard that I would end up with an injury. For many years, doing a triathlon again was completely out because my neck was so messed up. I still couldn’t look up after the first surgery I had done 10 years ago in Charlotte.

However, after Dr. Roy did my second surgery about four years ago, I was able to look up. Just imagine putting in eye drops lying flat on the bed because you can’t look up. With that surgery, I was also able to bicycle again, something I enjoy very much. I was even able to ride a speed bike where you are hunched over and have to look up to see the road.

As I mentioned before, I talked to Earle Koontz about this race and I was worried my body wouldn’t be able to handle the training regimen for such a distance (70.3 miles total). He told me to pay the $40 insurance so you can get your entry fee back if you get injured. And I signed up the next day with 40 weeks left on my journey.

It was amazing to have over 3,000 people compete in this race. Athletes competing in the full and half event were mixed in together, and with about two miles to go I see Earle! He started in a later wave and I never saw him on the course but there he was. The one who started with me on this journey was right in front of me and now we were finishing it together. A very special moment and thanks Earle to get me convinced to do this first and last half Ironman! It’s crazy, people — the weather went from hot to cold in one night. The wind went from nothing to 15-17 mph with gusts of who knows how fast.

The morning of the race, the inlet at Wrightsville Beach had waves like we were at the oceanside. The wind was blowing hard and cold and the volunteers were all bundled up. It has been almost 19 years since I have done my last triathlon and they were sprints (way shorter). I forgot about all the swimmers going out kicking and slapping and finding their way through the water. I was right in the mix of it all. It was quite an experience.

At the end of this 1.2-mile swim, there are ladders you have to climb up on. Thank goodness they had great volunteers who helped you get on the dock. I then had to run a quarter of a mile to go to the tent to change into my bike gear (shoes and helmet— I had a tri suit on through the whole race). I actually took my time. I was like, “this is my journey and I need a minute to just breathe!” It felt like I was in there for 20 minutes but my husband said it was only about six.

On the bike we went, with the wind blowing hard. We went on an overpass and a gust pushed me over to the left at least three feet! The first 41 miles was right into that wind. I am telling you, lots of prayers, thankfulness and thinking of my son and our Hurley Warriors kids putting it on every time they compete helped me get through it. I said to myself “suck it up Ester,” so my head went down and I was fighting against the wind. In the transition, I lost my little GPS on the bike and I purposely didn’t take a watch so I truly had no clue how fast I was going or even what time it was.

Fighting against the wind, the sun was from behind and I saw my whole shadow right in front of me. I said “that’s right, this is a race against myself.“ I saw plenty of people who broke down on their bikes on the side of the road and I saw EMS two times — once for a bike rider and once for a runner. We turned around with 15 miles to go and the wind was finally in the back! It was great.

By now, my quads were screaming but I said, “almost there!” I got quite emotional when I got towards the end of this part, knowing I could crawl the half marathon if I had to. I knew by now I was going to finish! There was a line going into this transition, so I had to be patient to start my last part of this journey.

My husband Kevin Marsh was so supportive through the race at each transition and my daughter Edie was at the bike run transition and at the finish line. It kept me going! With just 13.1 miles to go, I told my husband, “it’s going to take me three hours because my legs are shot.” I didn’t care at this point, I just wanted to finish. I kept trucking along and lots of people were walking.

And there was the finish line. Everyone was yelling, especially my Edie and Kevin. All those feelings were very overwhelming. My goal was to break seven hours, but I didn’t think I did because everything felt so slow. But actually, I did the entire event in 6 hours 43 minutes! The 1.2-mile swim took 37 minutes, the 56 miles on the bike took 3 hours and 35 minutes and my half marathon time was 2 hours and 14 minutes. And the transitions are counted in your time.

I did it! I am a half Iron Woman! My daughter gave me some needed “swag” from the Ironman. And my favorite new quote (on the front of my new T-shirt) is, “The miracle isn’t that I finished — It’s that I had the courage to start.”

Ester Marsh, finisher of the Beach to Battle Ship 70.3 Ironman in Wilmington, N.C.