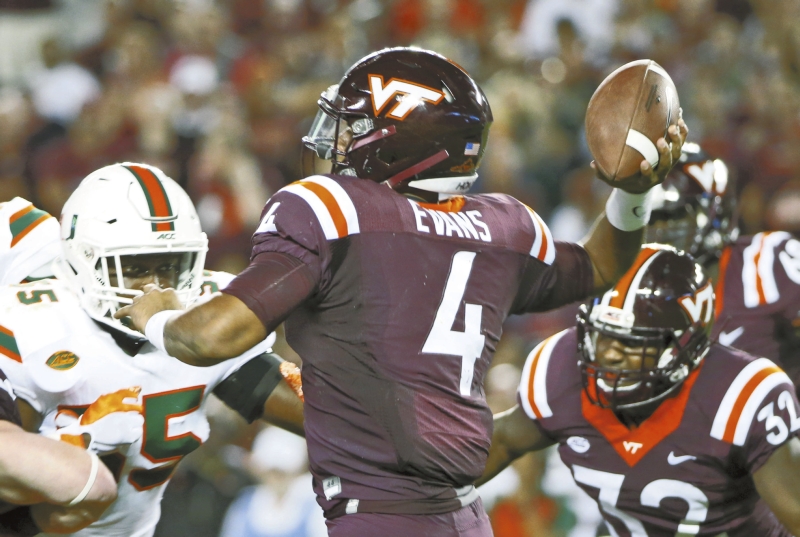 Evans hit Bucky Hodges with scoring throws of 7 and 12 yards, and Travon McMillian ran for 131 yards for the Hokies (5-2, 3-1 Atlantic Coast Conference), who kept pace with Coastal Division-leading North Carolina in the chase for a spot in the ACC title game.

Brad Kaaya threw for 323 yards and two touchdowns for the Hurricanes (4-3, 1-3), but he also was sacked eight times as they lost their third in a row. The Hokies limited Miami to 42 rushing yards on 29 carries thanks to the sacks, which cost Kaaya 55 yards.

“Obviously the key for us was we needed to stop the run and make Miami one-dimensional, and we were able to do that,” Hokies defensive coordinator Bud Foster said.  “We really did a great job attacking the line of scrimmage, keeping the lanes and the gaps tight, keeping those backs in a phone booth, so to speak.”

Joe Yearby had a 41-yard run for the Hurricanes, but otherwise managed just 18 yards on his eight other carries.

“The defense was playing tough, stacking the box,” he said of the Hokies. “They did everything we expected them to do. Everybody felt like they could have done something better.”

Woody Baron had three of the sacks for Virginia Tech, and fullback Sam Rogers threw his first career touchdown pass in the third quarter.

Miami: The Hurricanes have never won the Coastal Division since joining the ACC in 2004 and won’t win it again this year. Their defense was supposed to be a question entering the game, and they were without three starters and had four freshmen in the starting lineup, but their inability to generate a running game put all the pressure on Kaaya, and while he put up some good numbers, an offensive line that allowed eight sacks isn’t good enough to win most games against top level teams.

Virginia Tech: Evans was virtually mistake-free again, and their plethora of weapons in the pass game seems to be opening up the running game as well. Evans added 98 rushing yards, including a 34-yard score, as the Hokies piled up 253 yards on the ground. On defense, apart from last weekend’s stunning loss at Syracuse, the Hokies have allowed only 36 points in their last four non-Syracuse games.

Apart from their 31-17 loss at Syracuse last week, the Hokies have been playing Top 25-level football. In their other four most recent games, they have outscored Boston College, East Carolina, No. 22 North Carolina and now Miami 174-36.

Miami visits Notre Dame next Saturday. The Fighting Irish are off this weekend, and have lost four of their last five.

Virginia Tech plays its second consecutive Thursday night game when it visits Pittsburgh, which is off this weekend.