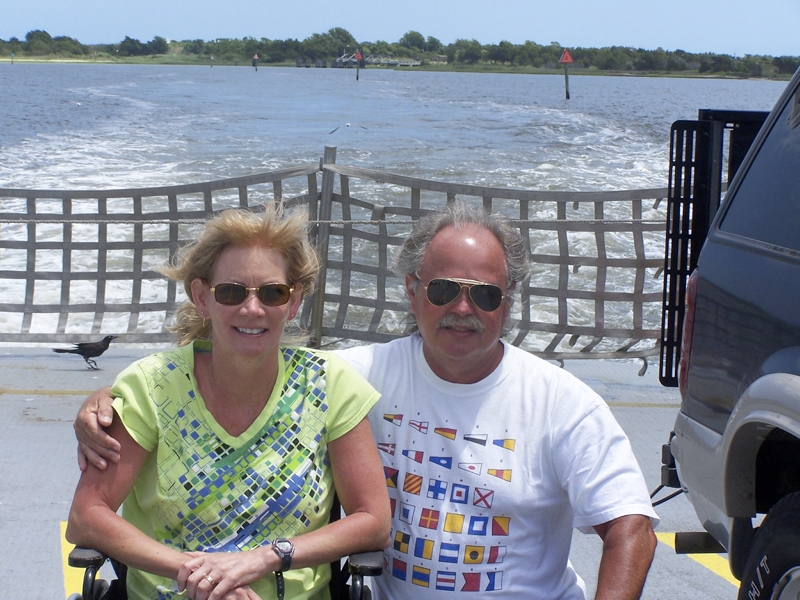 Melinda and Steve Weatherford on a ferryboat to Southport. Submitted photo

As a teenager, Melinda Weatherford enjoyed the marching band at West Rowan High School. She wanted to be a majorette and worked so hard in the front yard with her mom and neighbors cheering her on that she made head majorette.

In 1984, Melinda and Steve Weatherford married on their minister’s deck overlooking Lake Norman. Steve had grown up working nearby and had spent time working for Disney in Florida as a boat captain. The couple have two daughters, Shanna and Nikki, plus a grandson, Dash.

Later, Melinda and husband Steve enjoyed a very active lifestyle. The participated in local 5Ks and much more.

“We hiked the North Carolina mountains, camped and spent most summer weekends on Lake Norman,” Steve said. “We enjoyed sailing and motor boating, plus we snow skied in the winter. Then we got into sailboat racing.”

It was on a ski trip to Snowshoe, West Virginia, when Melinda noticed that something wasn’t right with one of her legs. It wouldn’t hold her up, and she couldn’t control the ski. Shortly afterward, Melinda was diagnosed with Multiple Sclerosis and has progressed from using a cane to walker and then on to a wheelchair and power chair.

MS causes extreme fatigue and extreme sensitivity to temperatures. Melinda is unable to stand for periods of time long enough to do household chores and cannot drive a car due to leg spasms, fatigue and brain fog. She had to retire on disability from the banking industry after stints with F&M, First Union and the State Employees Credit Union.

“I was the teller manager at the State Employees Credit Union, and loved it. I would be there today if my health would allow it,” she said.

The couple has stayed active, regularly visiting Rowan County YMCAs where Melinda can walk laps in the pool and use exercise machines that don’t require leg power while focusing on the other muscles of the body. They regularly visit the beach while using a beach accessible chair but can only stay at motels with ramps and elevators.

“I love visiting at Disney where they are the best for accommodating those that require special assistance,” Melinda said.

As the disease has progressed, Melinda’s neurologist has prescribed various oral and injectable medicines, some of which are life threatening.

“Melinda continues to look for better ways and is not content with just taking a pill,” Steve said.

Steve retired in 2011 from the City of Salisbury as manager of the Street Division after 31 years of service. One of the duties that he enjoyed was making sure that the city streets were clean and free of safety hazards before a local running event. Steve and Melinda had often participated in the Greenway and Fire Department 5Ks, both running and walking.

Then came a different focus. Steve began to push Melinda in her wheelchair as her condition worsened. The couple raised thousands of dollars for the Multiple Sclerosis Society, both in Salisbury and Concord.

“When I would show up and give them $3,000 to $4,000, they would ask which team I was on,” Steve said. “I just answered that I was on Melinda’s team. Now maybe some of that research is working for Melinda.”

Advancements in stem cell research have intrigued the Weatherfords. A stem cell transplant is the process of harvesting the body’s own stem cells from the most abundant source, fatty tissue. Those cells are then activated through an enrichment process and then reintroduced into the body.

Stem cells, by their nature, target areas of the body where treatment is most needed by following inflammatory signals. In Melinda’s case, they will begin the repair process by attaching to those cells diseased by MS. The advancement in adult stem cell therapy assists the body to regenerate missing or diseased tissue that normally would not occur. The goal of the stem cell transplant is to begin the healing process by reversing the MS.

The extraction process involves minor liposuction to harvest Melinda’s cells that are then exposed to four or more laboratory processes before they are reinjected at the most effective location based on a recent MRI.

Steve and Melinda’s insurance does not cover the stem cell transplant, and they can’t set the date for treatment until they have enough money for the procedure and flights to the West Coast.

“Melinda is ready to go,” Steve said. “We look forward to being able to walk hand in hand again on the beach and for our grandson to see his Mimi walk for the first time.”

When she thinks of walking again, Melinda sees many possibilities.

“I would love to be able to stand and do dishes, vacuum and clean our house again. To be able to walk into a restaurant, a downtown shop or a beach house would allow me to visit and socialize with friends. To regain my independence and take control of my own needs would be rewarding, to say the least.”

The Melinda Weatherford 5K has been planned for Saturday, Nov. 19 at Knox Middle School. The 5K will start at 9 a.m. and the half-mile fun run follows at 10 a.m. All participants get long-sleeve dri-fit shirts, plenty of food and a chance at great awards and door prizes. More information is available at www.salisburyrowanrunners.org

An account has been established at F&M for donations. Ask for the Road Runners Club of America, Melinda Weatherford 5K fund. Online registration is available at www.sportoften.com with donations also accepted there. Call 704-202-6601 for more information.