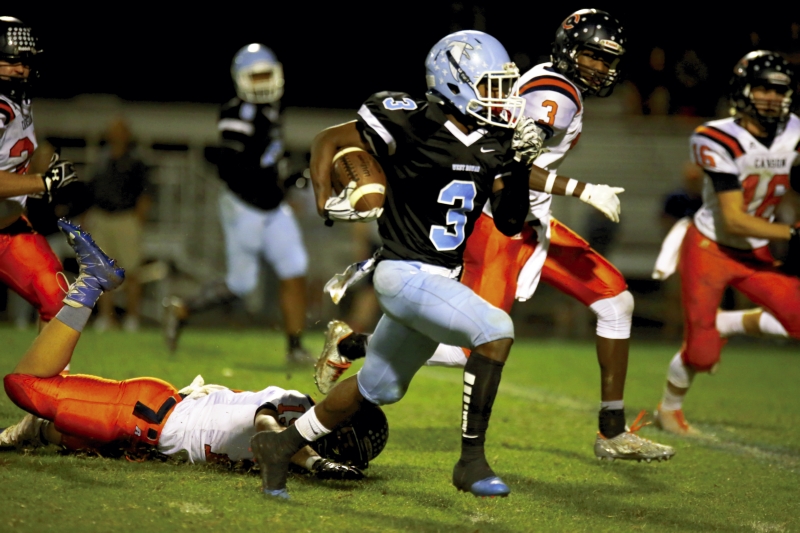 After eight weeks of the football season, it’s clear Rowan County’s strongest position is defensive back.
Three teams — West Rowan, East Rowan and Salisbury — own outstanding passing yards allowed numbers, with West leading the county with a stingy 62.9 allowed per game. East is second, allowing 68.4 per game through the air.
Passing yards allowed numbers can be misleading — if you can’t stop the run, teams don’t have to throw — but with the Falcons, at least, that’s not the case. They have the county’s second-best run defense behind North Rowan.
But back to the DBs for a second. North’s Chris Clodfelter and East’s Wesley Porter were first-team all-county last season and both are having strong seasons.
Three second-team all-county DBs also are back, and all are making a case for first team this time That stellar group includes West’s Deyquan Byrd (five interceptions), Carson’s Brenden Westbrook (four interceptions) and Carson safety Andrew Jerman, who has had more breakups than a Hollywood celebrity.
Other DBs who have stood out include Salisbury’s Tyvion Wood and West’s Paris Hillie. and West’s Malcolm Ingram, who had been out with a knee sprain, announced his return to the lineup with authority on Monday, picking off two passes against Central Cabarrus.
The six Rowan County teams have combined for only 32 touchdown passes this season (12 by West, 10 by North, 4 by Salisbury and 2 each by South Rowan, Carson and East Rowan.
But Rowan teams have put the ball in the end zone 12 times when they didn’t have the ball — either with pick-sixes or fumble returns.
West has three defensive touchdowns — all pick-sixes, one by Byrd and two by linebacker L.J. Robinson.
Carson has three defensive touchdowns — two pick-sixes by Westbrook, plus a fumble return by spur Luis Cipres.
North has three defensive touchdowns — a fumble return by defensive end Zion DeBose and pick-sixes by Clodfelter and linebacker Victor Lyles.
East also has three defensive touchdowns — pick-sixes by Porter and linebacker Zack Simpson and a fumble return by linebacker Christian Bennett.
South Rowan and Salisbury will be looking for their first defensive TD tonight.
Defensive TDs are usually game-changers, so there’s definitely a correlation between defensive scores and victories. Many defensive TDs are essentially 12-point swings — denying a potential score while getting a score simultaneously, and they are hard to overcome.
There also have been four special-teams touchdowns in the county this season. Two were kickoff returns by North running backs Jaleel Webster and Jaden Perry, but the other two were kickoff returns by dangerous defensive guys — East’s Porter and Carson’s Westbrook.
Everyone is in acton tonight. Carson, West Rowan (vs. East Rowan), North Rowan and Salisbury play at home. Davie is also at home, South Rowan and A.L. Brown are on the road.
The picks, 30-11 for the season, were just 2-2 last week. Robinson-A.L. Brown and Salisbury-East Davidson were played on Thursday, so there was no pick. North Rowan was off. Misses were on Davie’s first win against West Forsyth since 2011 and South Rowan’s first win against Carson since 2009.

EAST ROWAN (3-4, 2-3 SPC) at WEST ROWAN (6-1, 5-0 SPC)
What happened in 2015: West won 28-7 in a Thursday TV game.
The series: West leads 26-23-1. East’s most recent win against the Falcons was a 59-14 pounding in 2014.
History: East interrupted West’s 44-game county winning streak with a 13-7 upset in 2012.
Outlook: West has won five in a row and has a good shot at its first conference title since 2011.
East has 1,000-yard rusher Max Wall, but the Falcons will make stopping Wall their priority, and the Mustangs haven’t experienced much success through the air.
Offensively, West has special players in receiver Kortez Week (fifth all-time on the county receptions list) and back Jovon Quarles. It’s going to be tough for the Mustangs to contain both.
Pick: West 28, East 10

SOUTH ROWAN (1-6, 1-4 SPC) at CENTRAL CABARRUS (2-5, 1-4 SPC)
What happened in 2015: Central romped 45-0.
The series: South leads 10-6, but Central has won five in a row since South won in 2010.
History: Central’s defensive coordinator is South Rowan graduate Daniel Crosby, and his defenses have shut out the Raiders three straight times. It’s been 128-0 the last three years.
Outlook: South is playing after a win for the first time since early in the 2014 season. South hasn’t won two in a row since 2009 when the Raiders beat Statesville and East Rowan back-to-back.
Both teams have run more successfully than they’ve thrown it. Central shocked Concord for its only league win in five tries. Central, which played Monday against West Rowan, plays a lot of guys both ways, so fatigue could become a factor in the second half.
Pick: Central Cabarrus 28, South Rowan 14

WEST DAVIDSON (3-4, 0-1 CCC) at NORTH ROWAN (5-2, 1-0 CCC)
What happened in 2015: North won 13-0, holding West Davidson under 100 yards of offense and getting rushing TDs from Webster and Jayden Jones.
The series: North leads 19-4.
History: West Davidson’s most recent win in the series was a defensive-minded, 16-6, struggle in 2008. That was also the last season the Green Dragons were CCC champs.
Outlook: The Green Dragons have a balanced offense. North’s philosophy is always to try to take the run away and he Cavaliers probably can do that.
Oddly enough, West Davidson is 0-4 at home but 3-0 on the road, with wins against South Davidson, Central Davidson and Wheatmore.
Head coach Ben Hampton will be on the sideline tonight, but defensive coordinator Josh Sophia will have to sit this one out after an ejection from the Lexington game.
West Davidson lost its CCC opener to Thomasville, and North has been good most of the season. The Cavaliers should move to 2-0 in the league.
Pick: North Rowan 34, West Davidson 7

LEXINGTON (3-3, 0-1 CCC) at SALISBURY (1-6, 0-1 CCC)
What happened in 2015: Lexington won 17-14.
The series: Lexington leads 39-37-4.
History: Lexington hadn’t beaten the Hornets since 2002 when it won last year.
Outlook: Both teams lost their CCC opener, so this is virtually an elimination game for both as far as the CCC race.
Salisbury is scoring only 13 points per game, and that’s made it tough for the defense.
Pick: Lexington 20, Salisbury 13

CONCORD (5-2, 4-1 SPC) at CARSON (3-4, 2-3 SPC)
What happened in 2015: Concord led 21-0 at halftime and breezed, 35-14.
The series: Concord leads 4-0.
History: Besides winning league meetings the last three seasons, Concord beat Carson, 30-21, in a second-round playoff game in 2010, a year when the Cougars went 10-3.
Outlook: Concord’s loss to Central Cabarrus was a stunner, but the Spiders bounced back last week and took care of Cox Mill. Concord, the perennial SPC champ, isn’t likely to lose focus against a Carson team that’s reeling after three straight losses, including one to South Rowan.
Pick: Concord 28, Carson 14

A.L. BROWN (6-1, 2-0 SPC) at HOUGH (4-3, 1-1 SPC)
The series: Hough leads 3-0.
What happened in 2015: Hough’s defense controlled a 21-7 victory.
History: The Wonders were ranked sixth in 4A when Hough came to Kannapolis and beat them a year ago.
Outlook: Hough has lost to Mallard Creek and Butler, two of the state’s best. The other loss was 35-34 to undefeated Lake Norman. Hough QB Jackson Gibbs (grandson of Joe Gibbs) has thrown for 905 yards and nine TDs with three interceptions.
The Wonders lost at Mooresville, but they’ve gotten quality wins against Concord, Robinson and Vance.
It’s worth noting that Hough mauled Mooresville, 31-7, early in the season, but this still looks like a very even game and probably a defensive game.
Pick: Hough 14, A.L. Brown 10

NORTH DAVIDSON (5-2, 1-1 CPC) at DAVIE COUNTY (7-1, 3-0 CPC)
What happened in 2015: North Davidson QB Joe Butts threw for 326 yards and beat Davie 45-28.
The series: North Davidson has won the last four meetings to take a 26-22 lead.
History: Davie QB Chris Reynolds (now second in passing yards in school history) had an epic game in last year’s loss to the Black Knights, throwing for 362 yards. Cooper Wall had eight catches for 152 yards.
Outlook: Tim Devericks will be at the helm of the War Eagles for the first time after the resignation of DeVore Holman.
North Davidson has lost in CPC play to Mount Tabor.
Butts and Reynolds both are still throwing passes, so Davie’s homecoming game promises to be long and exciting. Davie’s defense, much stingier than in recent seasons, should make the difference and the War Eagles should get their sixth straight win.
Pick: Davie 27, North Davidson 14