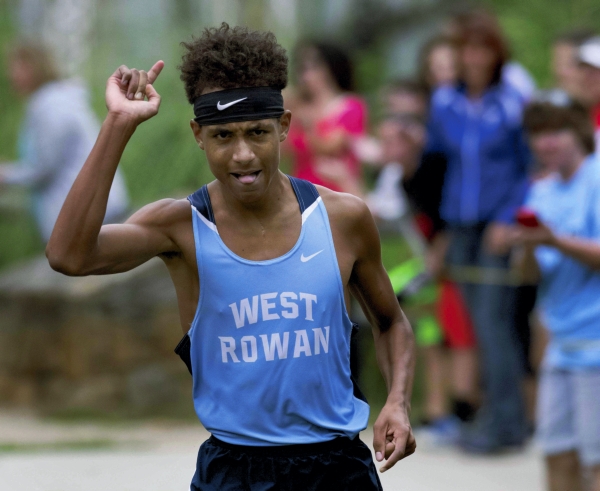 SALISBURY — West Rowan track standout Andrew Burgess spent his summer doing cool things such as winning an AAU age-group national championship in the steeplechase, but track shape and cross country shape are two different things.
He learned that the hard way.
“I got off to a very slow start this cross country season,” the junior said. “It was such a slow start that I was getting discouraged. But my teammates kept pushing me, and then I started to get back into it. My times started dropping, and right now I’m feeling pretty good.”
Burgess sparked a West Rowan onslaught in the Rowan County Championships on Wednesday evening at Dan Nicholas Park. Sprinting down the stretch like it was the 400 meters, he won the individual championship by four seconds over East Rowan junior Sean Incardona, and he led the Falcons to a runaway team title.
Burgess, who was clocked in 16:52, is West’s first individual boys champ since Craig Schmidt won in 1996. West hadn’t taken the team trophy since 1997.
“Talent comes in waves, I guess,” West coach Scott Foster said. “We’ve got a lot of good runners right now. Our jayvees (West dominated Wednesday’s jayvee race) could beat a lot of varsity teams.”
West had seven of the top 11 runners. Junior Oscar Bautista was third, senior Nathan Zauner was fourth, senior Cade Harrill was sixth, and senior Cameron Butler, who competed in Australia over the summer, was seventh. Sophomore Thomas Waldo was 10th, while junior Luke Hager was 11th.
“Carson was the dominant team in the county,” Butler said. “But we’ve been building for this year. I’ve got a good feeling about my teammates, and we push each other to get better every day.”
West’s score of 21 was comparable to those Zachary Marchinko-led Carson teams that won the last two county meets with scores of 22 and 19.
“We got to see those Carson teams up close and personal a lot, so we got a chance to see what a great team looks like,” Foster said. “That motivated our guys to do a lot of extra work this year because they want to be at that level. We’ve practiced on Saturdays. We’ve practiced before school. They’ve put in the work. I’m just happy to see it pay off for them with a championship.”
Incardona, who won the Pre-County Meet, set the pace most of the race. He knows Burgess very well, and he knew Burgess, who is outstanding in track at 400 meters and up, had greater speed and would be impossible to out-kick.
“The first mile was a little slow, and then I sprinted out front and I held Andrew off almost the entire race,” Incardona said. “It was going to be me or him — and he got me.”
Burgess feared that Incardona was getting too far away from him.
“I tried to stick right on Sean’s shoulder, but he was starting to get away,” Burgess said. “Just when I started to get worried, I could see that he was starting to come back to me, and I was gaining. I finally passed him with about 200 meters to go.”
Burgess raised his arms in triumph as he reached the finish line, and Rowan County had a new champion.
Incardona led East (44 points) to a second-place finish. He got a lot of help from fifth-place Ross Alexander and eight-place Jonathan Brindle. Chase Whitley (14th) and Jake Earnhardt (15th) rounded out the East scorers.
Jonah Evans placed 12th and led Carson to third place.
Salisbury took fourth. Keegan Dillon finished ninth to lead the Hornets.
South Rowan was fifth. Mitchell Juchnow’s 13th-place showing paced the Raiders.
North Rowan didn’t have enough runners to post a team score, but senior Michael Brandt finished 16th.