Hickory Ridge rushing attack too much for East Rowan 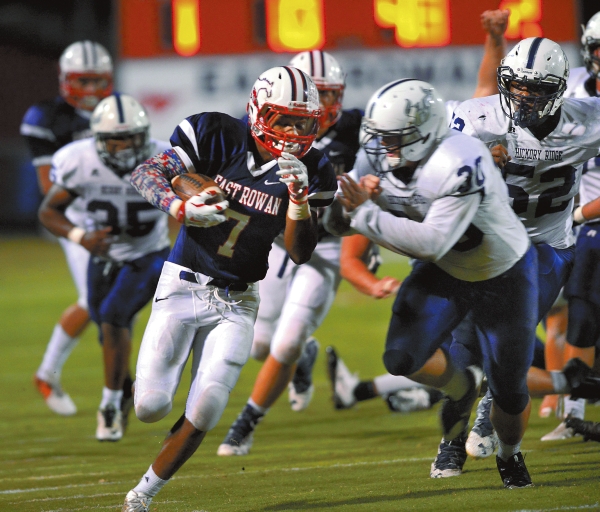 GRANITE QUARRY — Ultimately, the East Rowan Mustangs just could not find a way to stop a relentless rushing attack by Hickory Ridge. The Ragin’ Bulls came to town Friday night and gouged out 338 yards on 51 carries to roll past East, 33-13, in a South Piedmont Conference contest.

Quarterback Trevor Shue and running back Jeremiah Boyd provided the potent one-two punch for the Bulls (5-2, 3-2 SPC) with the bulk of the offense and two touchdowns each. Shue, a senior, ran 20 times out the option attack for 144 yards while Boyd notched 143 yards on 16 carries, giving them remarkable yards per carry averages of 9.7 and 8.9 respectively.

“Normally, we pass the ball about 20 times per game,” noted first year Hickory Ridge head coach Jason Seidel, ” but tonight we just took what they were giving us and had to develop a running mentality. We said we were going to keep pounding it and eventually something would pop.”

The Bulls running game didn’t pop until late in the third quarter when they put the game away with three long scoring plays but a key play at the end of the first half may have been the true game changer. Hickory Ridge led, 13-0, and had successfully stifled the East offense most of the first half in the process. But the Mustangs (2-4, 1-3 SPC) finally got untracked behind their stellar senior runner Max Wall as the first half was winding down, driving 80 yards to the Bulls one.

On the next play, Wall dove into the line looking to score but the ball came loose in the end zone. Hickory Ridge lineman Britton Dover came up with the loose ball as the officials ruled Wall had not broken the plane of the goal line and called a touchback. Just 26 seconds were left in the half and instead of possibly trimming the deficit to 13-7, East watched a golden opportunity slip away.

East coach Kenneth McClamrock did not want to offer a specific opinion on the crucial play. “It doesn’t matter at this point, ” he said of the play. “We have just got to find a way to put the ball into the end zone in that situation. We have to take advantage of our opportunities. That has been our achilles heel all season.”

In an ironic twist Hickory Ridge came out in the third quarter and quickly drove to the Mustang one thanks to a 25-yard jaunt by Gibson. But two plays later, Shue fumbled on a hard hit and East linebacker Christian Bennett pounced on it to halt the threat.

The score remained 13-0 until just under four minutes remained in the third quarter when the teams took turns breaking off dazzling scoring plays. The Bulls sealed the deal when Shue faked a pitch then broke straight up the middle unmolested for a 54-yard touchdown then Boyd broke up the gut on a quick hitter covering 51 yards and another score. In just two minutes of game clock time, the lead was quickly 27-0 with 1:37 left in the third.

East  responded quickly however as Max Wall got to the edge around the right side and sprinted 78 yards for a score. A two point pass failed as the Mustangs trailed 27-6. The run was part of a 165-yard effort for the Mustang senior as he closes in on a 1,000-yard season at 971. He had an even more dazzling 55-yard touchdown run in the fourth quarter that was nullified by a holding penalty.

“Max is a special player”, McClamrock said. “We have just got to get the other 10 people on offense to play as hard as he does. They were definitely keying on Max so we need other players to step up and make the plays for us.”

Both teams added a touchdown in the final quarter as substitutes got in on the action. Bulls slotback Brock Angel sprinted 39 yards for a score at 9:27 but the extra point was blocked by Wesley Porter to leave it at 33-6. On the next Bulls series Porter also broke through to batt away a 37 yard field goal attempt.

Backup quarterback Justin Smith then led East on a 60-yard drive culminated by a seven-yard scoring pass to Sam Wall at 2:01 remaining, making the final score 33-3. “I was glad to score,” the younger Wall said, “but I just wish we weren’t down so far or that I had been able to score earlier to help the team out.”

The Mustangs will be back home next Friday to celebrate homecoming and take on the Northwest Cabarrus Trojans  in another SPC contest. The win was the seventh in a row by Hickory Ridge over East, dating back to 2010.