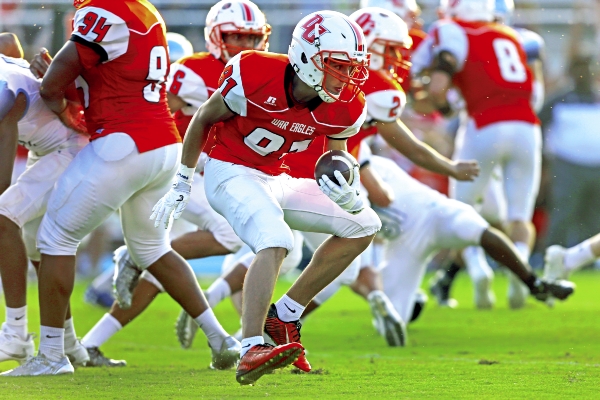 MOCKSVILLE — Davie got punched in the mouth moments into last night’s Central Piedmont Conference game against visiting Reagan.
The War Eagles did not blink, and they responded with a series of haymakers as they shredded Reagan, 39-7.
Davie improved to 6-1 and 2-0 in the CPC, the finest overall start in four years and the best league start in five years. It also snapped a three-game losing streak to the Raiders, who suffered a fourth straight loss while tumbling to 2-5, 0-2.
Reagan seized the early momentum when Mashion Powell broke a 53-yard run to the Davie 9-yard line on the Raiders’ fifth play from scrimmage. Three plays later, Jesiah Carlton’s jump pass to Theandre Hymon resulted in a 3-yard touchdown. It was the only pass of the eight-play drive.
The War Eagles answered the 7-0 deficit with five scores in five first-half possessions, and carried a 32-7 lead into the half.
“They came out in double tights, and we hadn’t seen that on film,” Davie coach DeVore Holman said. “We were able to make adjustments after that. So they took it to us right at the start. Our coaches made adjustments, our kids communicated with our coaches and we were able to slow what they were doing.”
The Davie surge started with Chris Reynolds’ 8-yard touchdown pass to Beau Byerly. After linebacker Cody Hendrix forced a fumble and Hite Merrifield recovered at the Reagan 23-yard line, Jared Griggs nailed a 40-yard field goal — making him 8 for 9 on the year.
A James Boyle sack set up a Reagan punt. On the first play of the second quarter, Reynolds found Cooper Wall for a 30-yard score on a crossing route.
Broc Barnette and Jack Little combined on a tackle for loss, Little came up with a blindside sack and Reagan’s punt only traveled 18 yards. After a pair of completions to Mason Wilson, Reynolds and Wall connected for a 3-yard touchdown.
Davie forced a three-and-out, and the offense continued to hum. Reynolds completed three passes to Byerly in a span of four plays, then hit Wilson in the end zone for a 14-yard TD.
In the third quarter, Hampton capped the scoring with an 8-yard run, the sophomore gaining 47 of 64 yards on the drive.
Merrifield and Matt Nesbit had interceptions — Merrifield has four of the team’s eight — as Davie held a fourth opponent to seven points or less.
The outcome was pretty much decided in the first half, when Davie had 15 first downs and Reagan had 69 yards in the 21 plays that followed Powell’s 53-yarder on his first touch of the night. Davie’s ferocious defense held Powell to 18 yards the rest of the way.
“It had been four years since we’ve had success against them,” Holman. “We wanted to right the ship.”
In the first half, Reynolds went 15 of 23 for 184 yards and four TDs, tying the 61-year-old school record for touchdown tosses in a game. Reynolds turned the trick for the third time.
In the first halves against Reynolds and Reagan, Reynolds was 34 of 46 for 453 yards and seven TDs without an interception. The wide margins have slowed his numbers, with the senior QB going 3 of 5 for 31 yards in the second halves of those games. Wall has four TD grabs in the two CPC romps.
But Davie produced great balance (186 rushing yards, 199 passing yards) because Hampton played through the roof with 17 carries for 140 yards. The shake-and-bake Adrian Cranfill, who had 327 rushing yards in the last three games, couldn’t find daylight in this one, so Hampton took the spotlight with several beastly runs. He found his mojo early and finished 52 yards over his previous career high.
“Peyton had an ankle bothering him, but he seems to be getting better and better each day,” Holman said. “If you’re getting ready to tackle him, you better prepare yourself for a big load.”
Already this year, the War Eagles have enjoyed payback wins over Page, West Rowan and Reagan. Next, they will try to beat West Forsyth for the first time in five years.
“We’ve got a big one next week,” left tackle and fourth-year starter Luke Pratapas said. “We’re going across the river and I’m excited. It’s going to be a good one.”