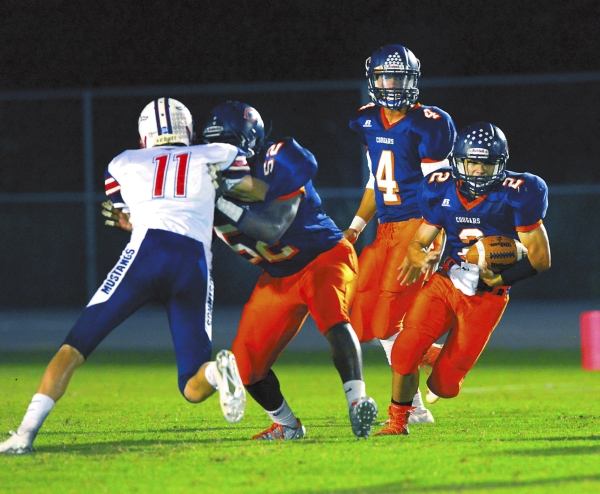 Wayne Hinshaw/for the Salisbury Post ... Carson running back Cole Sifford (2) runs for daylight after getting a block from Dequan Simms (52) on East Rowan’s Gabe Hinceman (11), during last night’s football game in China Grove. Carson QB Owen White looks on. Sifford had a career-high 149 yards in the 30-16 victory by the Cougars.

CHINA GROVE — Carson’s defense was a rubber band on Friday, bending, but not breaking, in a penalty-plagued, 30-16 victory against South Piedmont Conference rival East Rowan.
Carson (3-1) is 2-0 in conference play for the first time in school history.
“We gave up three field goals in the second quarter when we easily could’ve given up three touchdowns,” Carson coach Joe Pinyan said. “That probably was the difference in the game.”
Pinyan’s math skills were on target. Carson led, 14-9, at halftime when it might have been trailing, 21-14.
Credit Carson cornerback Brenden Westbrook and safey Andrew Jerman with touchdown-saving stops after East star Max Wall broke loose on long jaunts. Carson survived a 226-yard rushing night by Wall, who was disqualified from the wild contest with seven minutes left. The teams shared 30 penalties and 247 yards almost equally. Emotions ran high on both sides, and mental mistakes were frequent.
Carson’s ball-control running game (53 carries, 369 yards) eventually prevailed over East’s more balanced offensive attack with Tate Houpe’s quick passes helping out Wall, who has piled up more than 500 rushing yards in the past two weeks.
“We put a lot of things in this week to try to contain Wall, but we still had a few breakdowns,” Carson linebacker Isaac Bell said. “Several times it looked like our defense was going to break, but that’s when we bowed out backs.”
Carson got 149 straight-ahead, hard-nosed yards from 5-foot-7, 155-pound back Cole Sifford, who ran like an angry bull. Owen White was a magician running the option, and the Cougars got two short TD bursts from James Kotcamp and one from Bailey Rayfield.
“We spent the week in practice focused on getting better at executing the option,” White said. “We knew that was going to be a key tonight. Our backs ran hard, and it all started with those linemen up front.”
Carson scored first. White made the key play from the East 30, moving the chains with a fourth-and-9 run on a quarterback draw. White fought his way to the East 15, and the Cougars punched it in to lead, 7-0.
The Mustangs struck back suddenly early in the second quarter when Wall dashed 76 yards on a first-and-10 play. Westbrook didn’t concede the six. He gave chase. He tackled Wall at the Carson 4.
“Somehow Wall got away, but I just ran and ran, and fortunately, I was able to get him down out of bounds,” Westbrook said.
Unlike the Cougars, East (2-3, 1-2 SPC) couldn’t punch it in from short range. Peyton Lambert’s field goal cut Carson’s lead to 7-3.
White was intercepted by Wesley Porter shortly after that, but the pick was erased by a critical roughing the passer penalty. That flag led to Carson’s second TD and a 14-3 lead.
The rest of the first half belonged to the Mustangs.
East pushed into the red zone, but the drive stalled at the Carson 19. Gabe Hinceman’s field goal made it 14-6.
Late in the half, East drove to the Carson 4, but a pass breakup byTrey Sloop forced another Hinceman field goal, and Carson took a 14-9 lead to the break.
Carson’s key offensive series was the one to open the second half. East had some momentum, and the Cougars’ first two running plays were stoned for short gains.
But on third-and-8, White made a nice fake and broke out of a pack of Mustangs for 16 yards and a first down at the Carson 39. With White breaking another long gallop on a third-and-7, Carson went on to finish the drive and scored the pivotal TD.
“The week we play East Rowan is probably my most headache-filled week of the year, because of (East defensive coordinator) John Fitz,” Pinyan said. “We know when we play East we’ve got to put in some wrinkles. They’re not just going to let us line up and run our usual stuff.”
When Bell caught a two-point conversion pass from White, the Cougars led 22-9.
Four minutes after that TD, Carson made it 30-9, with Bailey Rayfield barging into the end zone from point-blank range, and Cameron Rayfield tacking on a two-point conversion.
“We cleaned up some things on offense with three great days of practice this week,” Carson center Alex Barrier said. Our backs were great. They always run hard, but tonight they were really following their blocks.”
Wall zoomed for a 50-yard dash as East tried to rally. Jerman was able to wrestle him down at the Carson 15, but a Houpe-to-Franklin Downing TD pass accounted for East’s final score.
“It was an emotional game, with a lot of dogpiles,” Barrier said. “You just had to keep your mouth shut and play football.”