Riding Route 66: Through Indiana, into Michigan 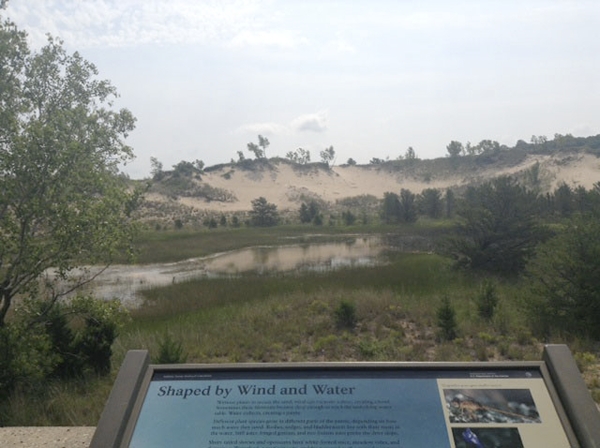 On his way through Indiana and into Michigan, Freeze stopped by the Indiana Dunes National Lakeshore Thursday morning. The dunes in this area have lots of vegetation on them, which surprised him. Photo by David Freeze

My concern late Wednesday evening was how to safely make it into Michigan today. After spending the night in Lansing, I first thought about following what Mapquest suggested for a cyclist route. However, they asked for 80 turns and 93 miles. I knew it would be no fun to watch for all those turns, so I came up with my own plan.

Leaving Lansing on Ridge Road got me into Indiana, and I knew that the same Route 41 from Chicago would help me get to East Chicago, where I would follow Route 12 into Michigan. I asked a policeman who was parked clocking rush hour traffic if he thought it was a good route. His approval helped me make good time. East Chicago, which is in Indiana, went on forever on Route 12 and then came Gary, Indiana.

The city of Gary looks bad with lots of burned out, abandoned and graffiti-laden buildings. Trash is everywhere on the streets and in yards, too. I was glad to leave town. Up next were endless and huge steel mills blocking the view of Lake Michigan. Heavy trucks going to and from the steel mills kept me on my toes.

The highlight of the morning was the Indiana Dunes National Seashore. I didn’t even have to show my National Parks pass because they decided to let me in free. Actually, all cyclists get in free, which would be a spectacular idea for the other national parks to do. But a $10 year’s pass isn’t bad, either.

Along part of the road that I pedaled on past the national seashore, there were dozens of huge homes with great views of Lake Michigan. The funny thing is that at least half of them didn’t look used anytime recently. Some yards had grass several feet high.

On into Michigan, just after I passed Michigan City, which just happens to also be in Indiana. I am about 10 miles north of the Michigan state line in a great little town called New Buffalo. I’m in the Buffalo Motel, one of my favorites of the whole adventure, after 66 miles of riding. Tonight I hope to get a chance to see the sun set into the water and will dip my wheel by no later than tomorrow morning before I start moving away from Lake Michigan.

So today is done, with just six turns and mostly an easy ride to follow. Space is tight in the paper tonight so I will save some details from today for tomorrow. See you then! Hopefully, I will have that picture of the sunset.