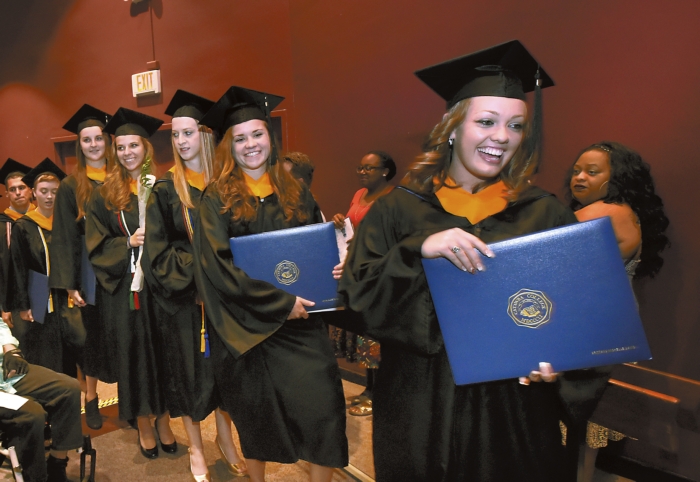 A happy smiling group of Catawba lady graduates leaving the auditorium. photo by Wayne Hinshaw, for the Salisbury Post

Bross, who also received the O.B. Michael Distinguished Alumnus award at the ceremony, told the graduates about how the milestones in his life — including graduating from Catawba — all related to exploration, risks and growth.

“I learned how to think — I learned how to explore — intellectually,” Bross said of his four years at Catawba.
He did not do it alone. He said in fact if it had not been for the faculty, staff and classmates who guided him and advised him, then he would not have graduated.

After college, Bross served in the U.S. Air Force Reserves, taught middle school history, earned a master’s degree and worked on Capitol Hill. He moved back home to Pennsylvania to work at the family business and ran unsuccessfully for state representative. Bross said it was his move to Houston to lead the company’s State Government and Community Affairs Group that paved the way for many life-changing decisions including coming to grips with being a gay man.

The Houston job led him to Microsoft where he would eventually become the Senior Director for Business and Corporate Responsibility where Bross works with many international organizations to discuss human rights issues.

The choices Bross made is what led him to professional fulfillment, to love and personal happiness, he said, because he is “now living a life of purpose.”

“As you leave Keppel, I hope you take a deep breath and explore, risk and grow as you continue your life’s journey,” Bross said.

Class president Johnathon Boles told a story of a young man who initially appeared to be dancing near the ocean, but upon closer inspection was throwing in starfish. A wise man asked the young man why he was doing it and told the young man it would not matter because there was so many starfish.

“It makes a difference,” the young man said simply.

Boles encouraged the graduates to make a difference in the world.

Prior to walking into Keppel Auditorium, the students formed a line that wrapped around the building and many stopped to take selfies to commemorate the moment while others gave hugs to fellow students, many of whom they will never see in the same setting again.

Many students scanned the audience as they made their way across the stage to accept their diplomas. President Brien Lewis charged the students go out and “pursue a life of purpose and of service,” to go and “approach every opportunity and every challenge with enthusiasm, persistence and good will,” as well as to go “pursue excellence and to make your alma mater proud.”