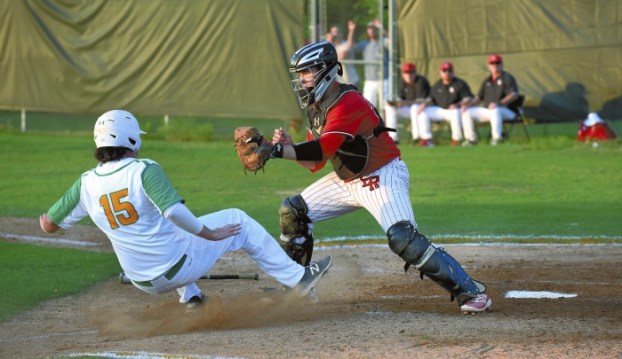 Wayne Hinshaw/for the Salisbury Post ... North Rowan’s Holden Lanier (15) is tagged out at the plate by East Rutherford catcher Reese Oliver in the third inning, during last night’s state 2A playoff game in Spencer. The visiting Cavaliers defeated the home-standing Cavs, 12-0.

SPENCER — East Rutherford’s baseball team ended the careers of some outstanding North Rowan Cavaliers — Jake Pritchard and Brandon White, among others — and left a trail of scorched earth on its way back to Forest City.
Tusculum signee Ethan Stewart smacked two homers and struck out nine batters in the five-inning game.
East Rutherford belted four long balls in Tuesday’s first-round 2A state-playoff game and mercy-ruled the Central Carolina Conference champs, 12-0.
“I think I’d seen five homers in this ballpark in my whole career,” Pritchard said, shaking his head. “It seemed like they hit that many in one inning.”
There wasn’t a lot North, which finished 17-8 and had a 10-game winning streak snapped rather emphatically, could do about what happened.
“Sometimes you just have to tip your hat,” North coach Aaron Rimer said. “The umpire had a good zone, you had to throw it over the plate to get a strike, and up and down the lineup they can hit. They had the best arm on the mound we’ve seen this year, and tonight they were the best team we’ve faced all year. They can glove it, too. That team is a machine.”
Fans of the 10th-seeded home team headed to the parking lot wondering how East Rutherford (17-7) got stuck with a No. 23 seed in the 2A West bracket. It was a reasonable question. Basically, East Rutherford plays in a split 3A/2A conference, and as the second-place finisher among the 2A teams in that league (R-S Central was the highest-finishing 2A), East Rutherford was tossed into the wild-card pile for playoff seeding.
East Rutherford couldn’t be seeded ahead of any first, second or third-place finishers in their respective leagues.
“We’re playing in a league with some 3A good teams, but we didn’t ask to be put in that league, the NCHSAA put us there,” East Rutherford coach Bobby Reynolds said. “Then we get a seed that is ridiculous, but there wasn’t anything we could do but take the pain. It was a bad draw for us, playing a conference champion on the road in the first round.”
It was a much worse draw for North Rowan. East Rutherford has won five state titles under Reynolds, and no one in Spencer will be shocked if ER makes a strong run at No. 6.
Six of East Rutherford’s losses were to conference foes Crest, Kings Mountain and R-S Central. Five were close. The seventh loss was to Gaffney, S.C,
“East Rutherford was a bad draw for us and they’ll probably be a bad draw for a lot of teams,” Rimer said. “Probably bad for everybody in their part of the bracket.”
White, a lefty headed to Belmont Abbey, is North’s best and he was arguably the top hurler in the CCC this season. The southpaw battled and put up three zeroes, but then he was crushed by a tidal wave in East Rutherford’s nine-run fourth that decided the game.
“It was a snowball that just kept rolling,” Rimer said.
A sac fly broke the ice for East Rutherford in the fourth, and solo bombs by Matt Miller and Stewart made it 3-0. After three singles, the third one a bunt, loaded the bases, Kendall McGowan delivered the clutch hit of the game — a two-out, two-run single that pushed the visitors’ advantage to 5-0.
It was pretty much over at that point, and it was 9-0 before the ugly inning ended.
“We weren’t having good at-bats against the left-hander the first time through the lineup,” East Rutherford coach Bobby Reynolds said. “We could’t get a groundball from our 3-hole hitter in the first inning when it would’ve meant a run and we kept popping up a lot. We’ve got kids who can run, but when you pop it up speed doesn’t help you.”
North had opportunities early when it was still 0-0, but North stranded two runners in each of the first three innings. North’s best chance to score came in the third when Robbie Monroe drove a double into the right-field corner with Holden Lanier running from first with one out.
But Lanier was held at third, and then was out easily at the plate trying to score on a ground ball.
“We had our chances,” Pritchard said. “But that’s a really good team. Good pitcher, and the best-hitting team that we’ve seen.”
After East Rutherford’s huge fourth inning, North didn’t get any more chances.
“The key to the game was our pitcher keeping it at zero those first three innings,” Reynolds said. “North was two hits away from being up 3-0, and if they had gotten ahead, we might’ve started to press. But they didn’t get ahead, and then we had that big ol’ fourth.”
Reynolds also coaches Cherryville American Legion and has put together a record-setting Hall of Fame career.
“I’ve had my battles with Rowan County, a lot of good ballgames,” Reynolds said. “Anytime you play a team with ‘Rowan’ on the jersey you respect them, and North Rowan has a very good club.”
Stewart was running sprints after the game, getting in additional work because he only needed to throw 65 pitches. Reynolds said he won’t start in Round 2, but he’ll be available out of the bullpen.
North fans will be watching the results of East Rutherford’s games with some interest.