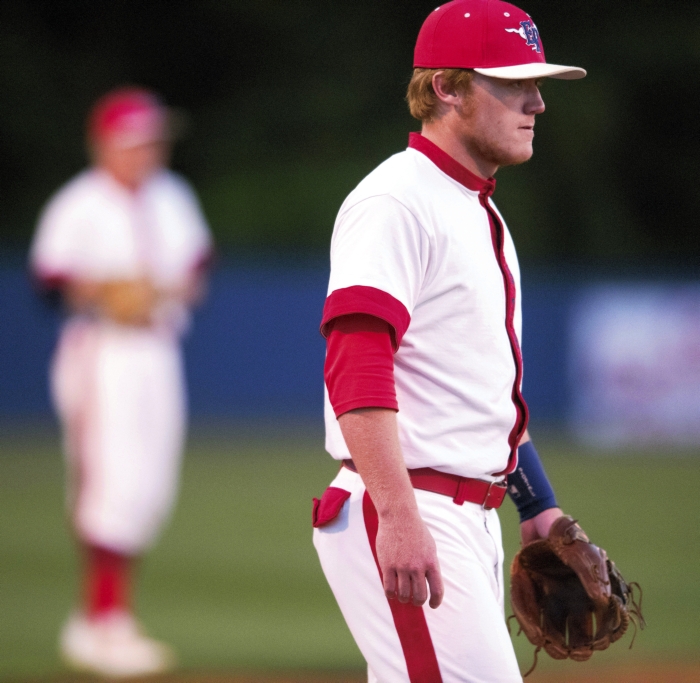 GRANITE QUARRY — East Rowan senior Jackson Justus’ key stat looks like a typo, but it’s accurate.
He has a team-leading 18 RBI on just 14 hits.
Now that’s timely hitting.
“When you start worrying a lot more about how the team is doing than how you’re doing individually, that’s when things work out for you,” Justus said.
Two sacrifice flies have contributed to Justus’ lofty RBI total, but mostly it’s been a wave of hits with runners in scoring position. East (14-6) has played 14 South Piedmont Conference games, none of them automatic victories. Justus has driven in at least one run in 11 of those 14.
“He’s a senior, he took it to heart when people didn’t think we were going to be any good, and he’s made a big jump,” East coach Brian Hightower said. “Back in September, he was getting ready for this season. He hasn’t missed a day of weightlifting or workouts, and he’s always here for extra hitting. He’s come a long way as far as giving this team mature leadership.”
Justus signed recently with Lenoir-Rhyne, a Division II school in Hickory and and one of Catawba’s South Atlantic Conference rivals.
While he’s East Rowan’s third baseman, there’s a chance the 6-foot-1, 215-pounder could wind up at first base with the Bears. He’s not worried about what defensive position he’ll play.
“I’m just really excited about getting a chance to play a game I love for another four years,” Justus said. “I’ll play anywhere they want me to play.”
The Justus surname and East Rowan athletics have been intertwined for a long time. Jackson’s father is Barry Justus, who coached East’s wrestling program with great distinction for 26 seasons.
Jackson has answered that question a few times: Why baseball instead of wrestling?
“Well, I did try wrestling until I was 10,” Justus said. “I also played basketball. But baseball was always my favorite sport.”
He played second base and left field when he was on East’s jayvees, but he took over as the varsity third baseman as a junior. He had a decent year — a .262 batting average with 15 RBIs for a 15-11 team.
The offensive jump as a senior for Justus can be attributed to a more disciplined, patient approach. He’s seeing more pitches, he’s getting into favorable counts, and he’s attacking pitches that he has a chance to drive.
He struck out 21 times as a junior, while walking only three times.
But as a senior, he’s walked more times (a team-high 14) than he’s struck out (12). That’s meant a quantum leap for his value as an offensive player. A .303 on-base percentage guy as a junior, he has a .426 on-base percentage as a senior.
Justus got off to a sluggish start this season, 6-for-30 in his first 11 games, but he’s been swinging a hotter bat since Easter and has raised his batting average to .275.
“It was a tough start for me,” Justus said. “But committing to Lenoir-Rhyne helped. It took a lot off my mind. There was some tension before I made a decision, but now I’m more relaxed.”
Justus whacked two doubles in a recent home win against South Rowan, and the strong, right-handed hitter has lashed opposite-field rockets off fences in games against Concord and West Rowan.
Home runs are going to come for Justus. It’s just a matter of time. Until then, Hightower will be happy with the run-scoring doubles and singles.
“He just keeps coming through with big hits for us,” Hightower said. “He’s shown that he has a chance to have success at the next level.”