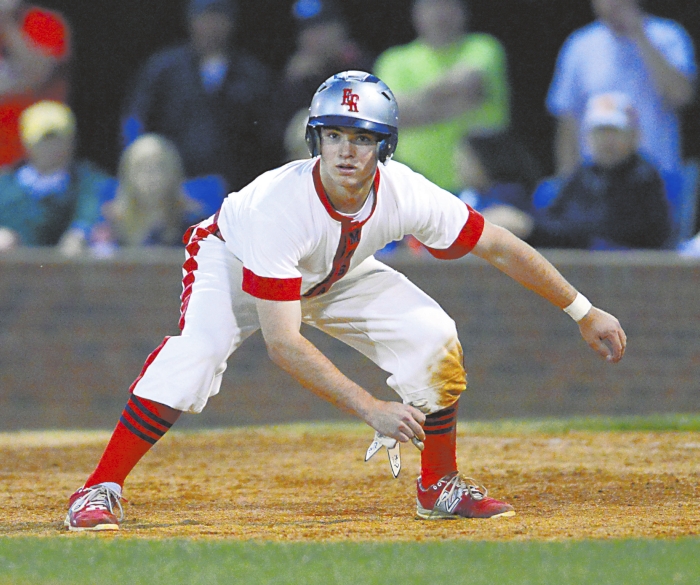 GRANITE QUARRY — There’s a race to be run in the South Piedmont Conference — and East Rowan is running it.

The Mustangs have turned it into a three-horse derby after winning their fourth straight league game Wednesday night at Staton Field, a 6-1 high school baseball victory over Concord.

“We’re playing good baseball, playing better defense and throwing strikes,” coach Brian Hightower said after East (13-5, 9-3) tightened its grip on third place. “But it’s always too soon to say anything until the season is over.”

East let its performance speak volumes. Junior pitcher Colby Myrick made his first start and sidearmed his way to his first victory. Right-hander Jordan Wise pitched three innings of one-hit relief. Slugger Jackson Justus continued his warming trend with a couple of run-scoring hits and center-fielder Chandler Blackwelder threw out a runner at the plate in the third inning, then made a acrobatic, Ringling Brothers catch in the seventh.

“They’re a pretty good team,” losing coach Shane Brown said after Concord (6-10, 4-8) had its modest, two-game winning streak snapped. “Coach Hightower gets every little ounce out of those guys.”

The game was scoreless through three innings, with Myrick matching Concord ace Will Horsley pitch for pitch. In the fourth, the Spiders went ahead without getting a hit, as Sam Rodgers was hit by an inside offering and eventually scored on Hunter Hinson’s groundout.

East responded with three runs in the last of the fourth. First came John Owen’s leadoff bloop single to right field. Blackwelder followed with a chop single to left before Justus — who struck out on a rising, 3-2 fastball earlier in the game — belted an RBI-double into the right-field corner to tie the score.

“With two strikes I was just trying to protect the plate,” said Justus, who went 2-for-3 with two RBIs. “But I was on time. I timed it up.”

Brown was quick to applaud Justus. “He put a great swing on that 2-2 pitch,” he said. “It was a great pitch too. We wanted to elevate it because we got him on the same pitch his first time up. But he made an in-game adjustment, which is what this game is all about, and hit it well.”

East’s Will Brown followed with a ground-ball single up the middle, giving the Mustangs four consecutive hits and a 2-1 lead. A third run crossed when Tanner File bounced into a double play.

“It just got away from us,” Concord catcher Matt Panner said after collecting two of the Spiders’ four hits. “We gave up a couple of hits and it kind of cascaded from there. (Horsley) is a great pitcher. He throws hard, gets ahead in the count and makes you put the ball in play.”

East padded its lead with an unearned run in the fifth inning when Ike Freeman singled and scored when Justus steered a two-out single into left field. In the sixth, Freeman and Owen drew bases-loaded walks against Rodgers. Not to be overlooked was Blackwelder’s sparkling play. There was no score and two away in the top of the third when the junior gathered Panner’s base hit in deep left-center and rifled a one-hop relay to catcher Trevor Scruggs, nailing Concord’s Dubby West at the plate.

“He’s got some speed, too,” Blackwelder said. “But Hightower had me shift over to the gap and (Panner) hit it right to me. I played it perfectly, got a perfect hop and made a good throw.”

In the seventh inning, with Wise on the mound providing the gift of closure, Blackwelder robbed Carter Mozingo of an extra-base hit when he made a sliding catch in deep right-center. “That guy had been pulling the ball all game,” he said. “I was glad I got to it. I dove for it or slid or whatever, you can call it what you want.”

On this night, call it an exclamation point — one that punctuated East’s push for a conference title.

NOTES: Concord turned double plays in the third, fourth and sixth innings. … Owen went 2-for-3 with a stolen base, run scored and an RBI. Myrick allowed one run on three hits in four innings. “He did more than I wanted,” Hightower said.