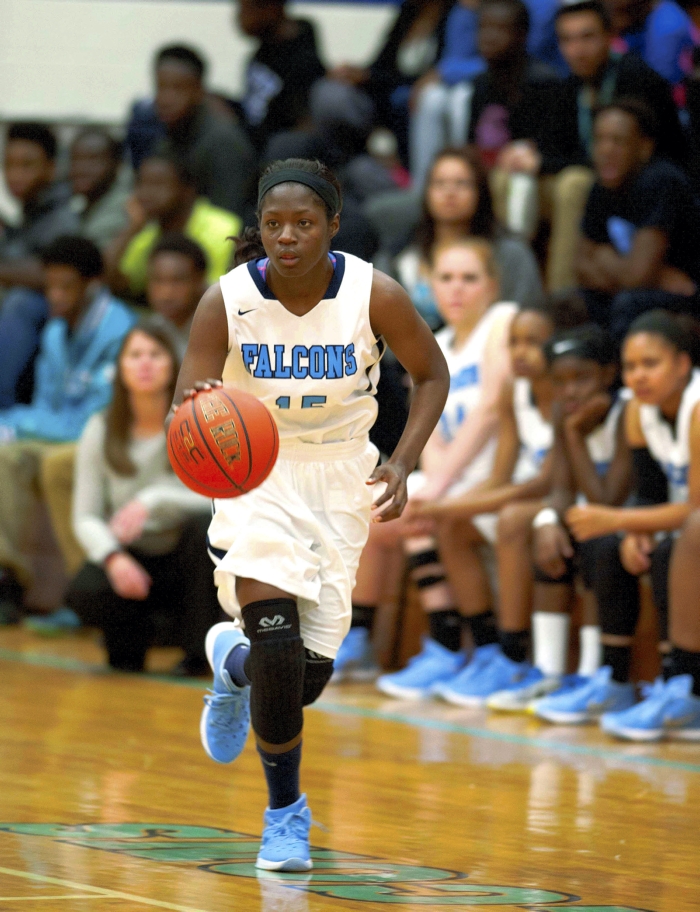 Hall, the Rowan County Girls Player of the Year, wanted her senior season at West Rowan to be memorable in terms of wins and losses. To accomplish that, Hall knew that she needed to get others involved.

Sophomore Egypt Alexander emerged for the Falcons’ South Piedmont Conference champions by scoring a team-high 528 points and averaging 17.6 per game. Alexander, also a first team all-county selection, received tutelage from Hall, not to mention many assists in the paint.

What Hall did was lead.

She averaged 10.3 points per game to finish her career with 1,343 points but Hall got others involved. If Hall went to the bench with foul trouble, West just looked like a different team. Hall could rebound, handle the ball, pass and defend with anyone.

“It (being county player of the year) was something that I strived for, not so much by scoring a lot of points but just trying to be an all-around player and leader,” said Hall. “I felt like I could have scored more, but I really wasn’t worried about that … I wanted to get the others involved and Egypt really stepped up and showed that she can take over a game.

“Team goals are more important,” continued Hall. “But I never dreamed that we would have had that type season, winning 19 in a row. I told the team after the loss to Weddington that nobody expected to get as far as we did, and that I was so happy for our team.”

The Weddington loss came in the third round of the state 3A playoffs, at home in Mount Ulla. The Falcons missed a lot of free throws and fell, 71-70.

Along the way, West had three big wins over SPC-rival and pre-season favorite Hickory Ridge. The win over the Ragin’ Bulls on senior night at West, a come-from-behind, 71-69 win, still brings a gleam to Hall’s eyes and a smile to her face. She scored 17 points that night.

“My senior night against Hickory Ridge was probably the most emotional and biggest moment during my career at West, even more so than the game when I reached 1,000 points,” Hall remembers. “That’s the best game that we played and I enjoyed it so much.”

Hall’s play was noticed by many college coaches. She recently signed a scholarship offer with NCAA Division I Longwood and chose the Lancers over other interested parties like Morehead State, Catawba, Belmont Abbey and Limestone.

It was tempting to join former West teammate Shay Steele at Morehead State, but Hall said that she made the best decision for herself.

“I went up for a visit and hung out with Shay and it was pretty fun experience, but when I got to Longwood, I just knew that’s where I wanted to go,” said Hall. “The Longwood coaches had followed me all last summer and when I visited, it reminded me of the way West Rowan is, in a real rural area.”

Longwood is in Farmville, a small town of 8,100, located in south central Virginia, between Richmond and Lynchburg.  The Lancers’ head coach, Bill Reinson, has been at the helm for 14 years. Longwood was 8-22 this season.

Hall said that she wants to major in athletic training.

“I’m excited about it,” Hall continued. “Longwood is going to have some good players coming in, so it’s going to be a fight for playing time. But I believe in my abilities and that I will be able to help them. We’re going to fight to be in the NCAA Tournament.”

At this point, Hall is still basking in the glow of what West Rowan’s Falcons just accomplished — and what the team should continue to do under coach Ashley Poole.

“Coach Poole is a great coach and was a joy to play for,” said Hall. “She brought just a whole different attitude and mindset,” continued Hall. “Even when we were down, she’d say, ‘if ya’ll want it, ya’ll can go get it,’ and that’s how it was.”

“Some girls who are still learning how to play will be looking up to Egypt Alexander and (freshman guard) Mary Sobotaka, if they’re going to play for the Falcons,” said Hall.