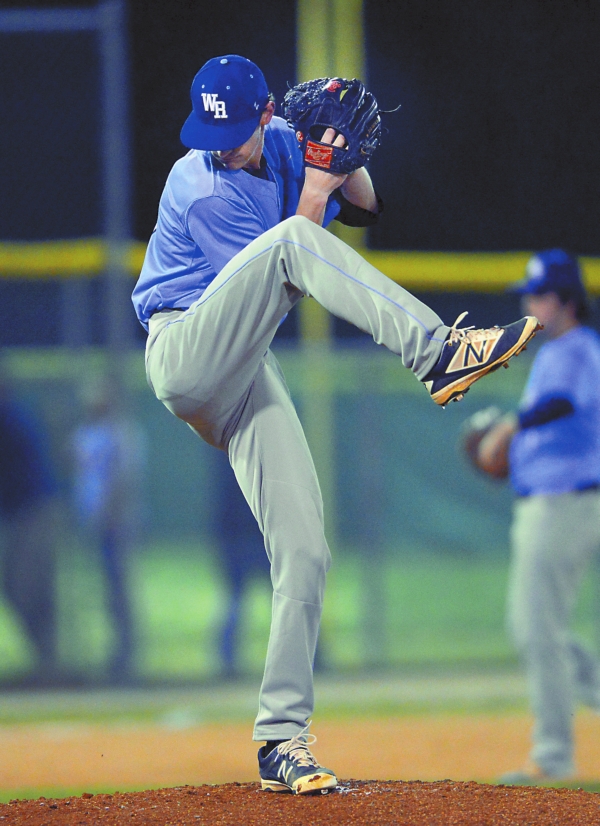 GRANITE QUARRY — North Rowan’s pitching staff was in a generous mood Saturday night — and West Rowan has never been shy about accepting a handout.

The Falcons coaxed 12 walks in six innings from a quartet of North hurlers at Staton Field, en route to a 7-4 victory in the East Rowan Easter Baseball Classic.

“There were a couple of times when we were a base hit away from busting it open,” winning coach Seth Graham said after West (10-2) became the first county team to double-digit wins. “But our guys had a good eye, even with a ragged strike zone. They understand there are other ways to get on base other than getting a hit.”

West never trailed, but left the bases loaded in the first and third innings against North starter Noah Gonzalez, and again in the fourth against reliever McGuire Smith. Gonzalez, a junior right-hander, struggled to command any of his pitches and walked eight in 3 1/3 innings. A pre-game injury to Jake Pritchard — North’s starting catcher and No. 3 hitter — was a key factor.

“Yeah, we walked a lot of people,” coach Aaron Rimer said after the Cavaliers fell to 7-4. “Some of that goes back to not getting some calls we might have if Jake was back there. But Steven Thurston stepped in and competed. Our guys said, ‘Here we are. Let’s see if we can win this thing.'”

North out-hit West, 9-8, and received run-scoring doubles from Joe Harrison and Robert Monroe. Teammate Corbin Smith went 3-for-3 and drew a seventh-inning walk, but for the most part, winning pitcher Bryan Ketchie (5-0) was on his game.

“We got news during the week that Ketchie was going to pitch against us,” Smith said. “We knew it was going to be tough because he’s a hard thrower. I just stayed focused on the task at hand and had one of my best hitting games.”

Ketchie, a senior southpaw, escaped a bases-loaded jam in the top of the first when he induced an inning-ending force-out. “Then I settled down,” he said. “I felt good out there and fell into a groove.”

He was grooving despite the plate umpire’s floating-casino strike zone. Smith called it, “kind of wishy-washy,” while Ketchie had to adjust his mental approach to North’s lineup.

“It was all over the place,” he said after yielding just one earned run, fanning nine and walking one in six-plus innings. “I had to make them swing. I had to get them hacking at everything.”

Ketchie threw first-pitch strikes to 21 of the 29 batters he faced. Offensive support came from leadoff batter Lee Poteat — who smacked a pair of doubles and reached base four times — and catcher Trevor Atwood, who went 3-for-4 with four RBIs. Atwood’s two-out, two-run single to left field helped the Falcons take a 4-1 lead in the last of the fourth.

“I was confident,” Atwood said. “(Coach) Graham told us (Gonzalez) was throwing first-pitch fastballs and to be ready for it. That hit turned the momentum back to us.”

West stretched its lead to 7-2 with three runs against North’s bullpen an inning later. Kacey Otto and Atwood delivered run-scoring hits and another run crossed on a wild pitch.

“We made too many mistakes, especially on the mound,” Rimer said afterward. “But we were in the game.”

Ketchie faltered after allowing a leadoff single to Henderson Lentz in the North seventh, but sophomore Olen Stamper procured the last three outs.

“Hats off to Bryan. I thought he threw the ball well,” Graham said. “That’s a good team. They swing the bat real well and go up there ready to hit. He had to nibble. He had to pitch through some adversity. But he got it done for us.”

College baseball: Catawba pounds its way into tie for…