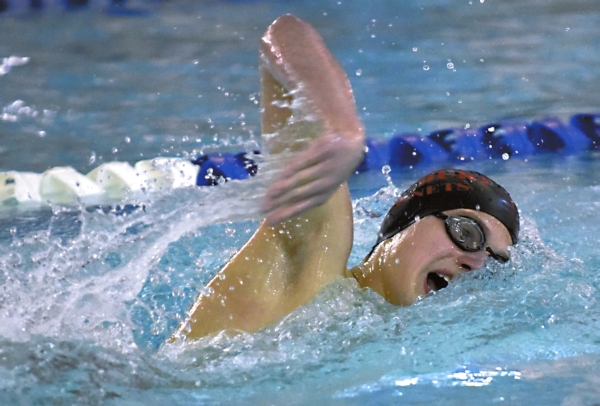 Wayne Hinshaw/for the Salisbury Post ... Salisbury’s Ethan Knorr won the boys MVP at the Rowan County swim meet on Thursday at Hurley YMCA. Above, Knorr swims to victory in the 500-yard freestyle. Purchase this photo

SALISBURY — South Rowan is struggling in some athletic endeavors right now, but boys swimming isn’t one of them.
The Raiders won the Rowan County Championships for the 12th straight time on Thursday at the Hurley YMCA. No county meet was held in 2012 and 2013, but South has won all of them since 2003.
“A lot of people didn’t want us to win another one today, but we still did,” South standout Dakota Dennis said. “We had to fight for it.”
Most of the punches were thrown between the Raiders and Salisbury. The Hornets were powered by sophomore phenom Ethan Knorr, the meet MVP for the second straight year and a nationally ranked swimmer, but the Raiders prevailed 104-97.
Rounding out the team scoring were East Rowan (45), Carson (29), West Rowan (24) and North Rowan (2).
There have been 17 county meets. Now South’s boys have won 14 times. East, West and Salisbury own one win apiece.
“We swam much faster than I thought we would,” South coach Eric Anderson said. “We did extremely well. Salisbury and East Rowan have great swimmers, but we stepped up to the level of the competition.”
South had three individual wins, with Stetson Johnson taking the 100 backstroke, Dennis winning the 50 freestyle, and Andrew Perry claiming the 100 butterfly.
The Raiders also were strong in the relays and those relays provided double points. Dennis, Johnston, Owen Hartman and Shaggy Wyatt were a winning combination for the Raiders in the 200 medley relay as well as the 200 freestyle relay.
South secured victory with its second-place showing in the 400 freestyle relay that closed the day. Wyatt punched the air when he left the pool. He knew the Raiders had won even before the official scores were announced.
East Rowan’s Chance Brown won the 200 freestyle race. The rest of the winners were Hornets.
Knorr won the 200 IM and the 500 freestyle and teamed with Keegan Dillon, Roarke Burton and Matt Woolly to take the 400 freestyle relay.
Burton won the 100 freestyle, while Woolly, a burly football lineman, was crowned in the 100 breaststroke.
Knorr (two individual wins, a relay win and a relay second place) won the 500 free by nearly a minute.
“Knorr is amazing,” Woolly said. “He carried us in the relays. He just blows people away.”
But the day, team-wise at least, belonged to South.
Even when they weren’t winning an event, the Raiders were doing special things. Tyler Fields, a first-year swimmer, knocked seven seconds off his seed time in the 100 breaststroke to give the Raiders a surprising — and vital — second place.
“I saw coach screaming at me and I thought I was doing something bad,” Fields said. “But he was just excited about how well I was doing. It’s my first year, but it was pretty awesome to help the team win.”
It felt pretty awesome for Anderson as well. He’s doing some good work and is maintaining a championship program that was put in place by Greg Yanz.
“I’m proud of a lot of people,” Anderson said. “In a championship meet, it always comes down to depth. Our depth came through for us today.”