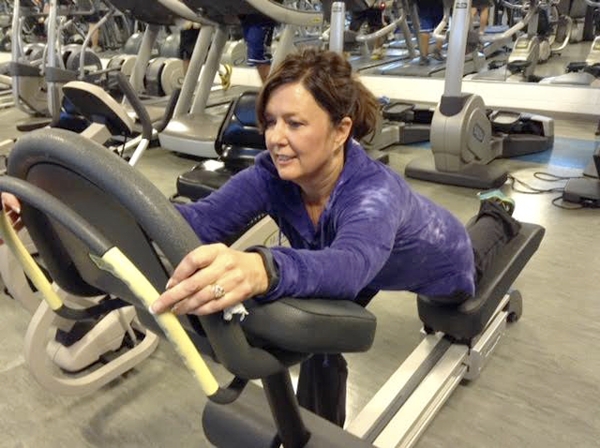 Brent Parks and Norma Honeycutt have moved on. I expect good things from them as they continue their wellness journeys. I’ll make sure to update everyone on how they are doing every few months.

Kristy Bell just finished her fourth official month working with me, leaving eight more to go. After making huge progress over the first three months, Kristy slipped backwards during December. Her exercise effort dipped and her calories increased. Now after a major refocus, Kristy is back in the trenches pushing forward with a new resolve to achieve her long term goals of driving again, walking around unsupported while shopping in Walmart and eventually being employed again.

Kristy said, “I know I want to take my life back.” Just a few basics of her story to refresh everyone are worth mentioning. For two years, prior to this past September, Kristy had not walked unsupported or even been able to make her own meals. Her doctor prescribed a supervised exercise program.

The South Rowan YMCA and other professionals have committed to providing the tools and the means for long-term weight loss.

Now a regular in water aerobics and the Silver Sneakers aerobics class, Kristy can walk unsupported for as much as 3,500 steps a day. I’ve encouraged her to keep building that number. This past Monday, Kristy also attended a nutritional presentation by Novant Health at the South Y. Kristy headed into January with some ground to make up on her weight loss. From an original weight of 555 pounds, Kristy had dropped to as low as 508 but then climbed back to 523 during December. January will be a very important month for her, needing to prove the verbal commitment that she has made to her wellness and support team.

New to the wellness transformation journey for 2016 is Michelle Patterson, co-owner of Patterson Farms. Michelle is familiar to Rowan County residents in many ways. Besides her classic on-farm title of Director of Fun, Michelle is involved in many community projects. She chairs the Rowan County Rebranding Committee, handles public relations and serves on the United Way board, serves her church which includes teaching Sunday school and holds a seat on the Chamber of Commerce and Farm Bureau boards. Michelle manages two farm markets, three teenage daughters and one husband. I almost forgot that she is the assistant coach for West Rowan High School’s swim team and also directs the county’s largest bicycle gathering called “The Great Berry Ride.”

Michelle has more goals in addition to weight loss, just as have Brent, Norma and Kristy.

Like each of them, she is seeking better health in general.

Michelle said, “I want to lose 20 pounds but I really want to relieve stress. I am open to all kinds of exercise, hoping to find something that is enjoyable enough to become a regular part of my life. My major goals include lowering my blood pressure and leaving behind the medications that I currently take.” Michelle turned 50 on Jan. 12.

Having grown up in Fort Mill, S.C., Michelle has been in Rowan County for 21 years.

I have known her for much of that time. We talk often about making exercise a part of her busy schedule and managing her stress. Now we’ll get to work together toward those goals for the rest of 2016.

My focus will be to build on Michelle’s fitness from swimming by exploring additional exercises and even group classes. We’ll pay attention to Michelle’s calorie intake and some better food and drink choices.

She can probably get a big discount on Patterson’s tomatoes and strawberries. This is going to be fun, challenging at times, and still I believe ultimately productive. By the way, an early quote from Michelle came after I asked her about the workout on her birthday and specifically whether she had a good sweat.

She said, “I didn’t sweat much but I glistened a lot.”

You can count on the fact that Michelle will be sweating full blast real soon. I cautioned her already that she dresses too nice for her workouts. Better to bring a nice shirt to the Y that she can change into for the trip back to the farm. Look for some good quality sweaty photos when I report on her progress through the end of January.

Say “Hi” and encourage both Kristy and Michelle when you see them out and about, and especially when they’re sweating!