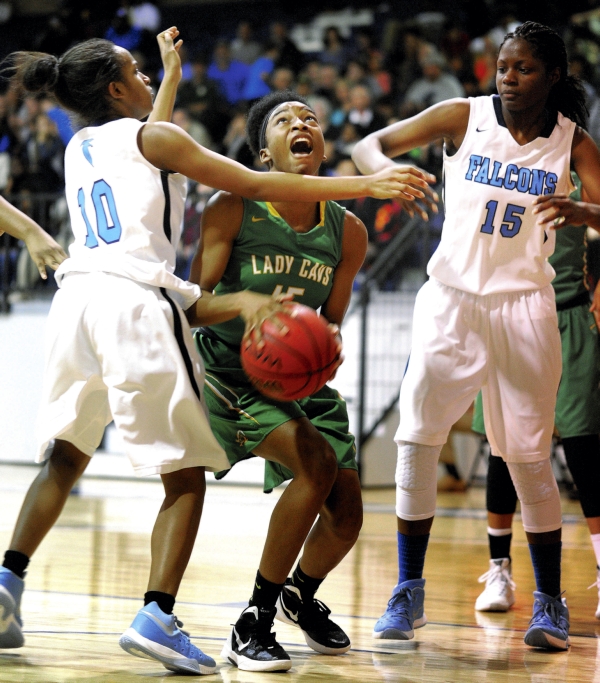 “We’re still not taking care of the ball,” he said at Goodman Gym, where the fourth-seeded Cavs (7-4) will chase their fifth tourney crown tonight against Carson. “The only reason it was close was because of all our turnovers at the end of the game.”

North led by as many as 16 points late in the third quarter, but committed half of its 14 turnovers in the fourth. “Still, it feels good,” Aliyah Farmer said. “I think West thought it was going to the championship. We had to show them what we can do.”

The show started early. By the time the match was five minutes old, West had already turned the ball over seven times and found itself down, 16-7.

“We didn’t show up,” West coach Ashley Poole said after the No. 1-seeded Falcons (9-1) broke into the loss column. “We didn’t play the first quarter. I think if we didn’t have that kind of first quarter it might have been a different game. The things that we stressed, they didn’t do.”

Specifically, West didn’t do a good job defending Farmer. The 5-foot-9 senior scored 11 first-quarter points in all sorts of fashion — an authoritative dribble-drive down the lane, a 3-pointer from the top of the wheel and an offensive rebound/putback combo that gave North a 21-14 edge.

“We put Aliyah in the high post and gave her the ball,” Lytton said. “That worked in the first quarter, but we didn’t continue to do that for some reason. It’s not like she was there and she wasn’t open. She kept getting open and we didn’t get her the ball — second, third or fourth quarters — and it hurt us.”

Camouflaged in the loss was an unusually quiet game from West’s Khaila Hall, the do-it-all senior who was limited to four points in each half. “I don’t know if she was frustrated or nervous, but she didn’t play her best game,” Farmer said.

“I really wanted to win this game,” Alexander said. “It wasn’t just about beating them. It was about playing for the championship.”

Alexander gave West a fighting chance. Her three-point play with 3:48 remaining drew the Falcons within 50-43 and her last-minute steal and runaway layup trimmed the deficit to five points. But North secured the win — and another shot at the title — with a couple of Washington free throws.

“It’s good to be back in the finals,” Lytton said. “But we have to continue to get better.”