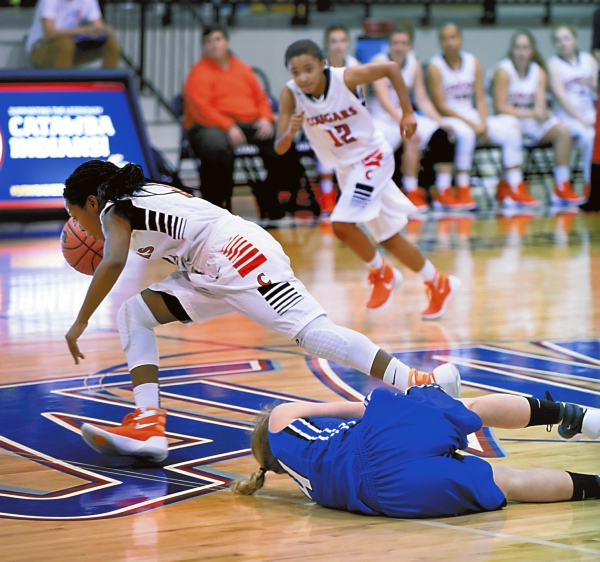 Carson's Olivia Gabriel goes after a loose ball as a Mooresville player hits the floor in the Dale's Sporting Goods Sam Moir Christmas Classic. photo by Wayne Hinshaw, for the Salisbury Post

SALISBURY — Carson sophomore Olivia Gabriel fired a 3-pointer from the right corner that went in, then popped out, then went back in.
The ball bounced Gabriel’s way on Monday and her 22 points — in three quarters — led Carson to an easy 47-28 win against Mooresville in the first round of the Dale’s Sporting Goods Sam Moir Christmas Classic.
On her worst day, the 5-foot-3 Gabriel is still pretty good. When she’s on, when she’s making perimeter shots in addition to her flying layups, she can be a handful.
“The best thing about her game today was that she was a really good point guard for us,” Carson coach Brooke Misenheimer said. “She made really good decisions. She took what the defense gave her and didn’t force anything. In the first half, especially, she made the right decisions.”
After three quarters, Gabriel had personally outscored the Blue Devils 22-20. Misenheimer let her rest most of the fourth quarter.
“It was a good game for us,” Gabriel said. “We had a lot of hustle. We got momentum on our side early, and that led to a lot of easy shots.”
Gabriel set the Carson freshman record last season with 325 points. She’s already up to 470 for her career. As long as she stays healthy, she can make a serious impact on the record book.
Carson jumped out to a 7-0 lead on a 3-pointer by Gabriel.
The Cougars hit a lull in the second quarter and allowed Mooresville (3-7) to scrap back to a 17-11 deficit on an inside bucket by Hiyah Davis.
But McKenzie Gadson and Gabriel scored to push Carson’s lead back to 21-11 at halftime.
Carson’s 9-0 run to start the third quarter settled any doubt about the outcome. Gabriel hit that in-out-in 3-pointer to begin the half. Then Gadson scored four points on a stickback and a creative transition layup on which she made a sweet, change-of-direction dribble. Improving post player Anne Marie Turney capped the run with two free throws.
“We started the third quarter really strong,” Misenheimer said. “We boxed out better than we did in the first half, we made some shots, and we ran the floor well.”
Carson reserves Sydney Taylor and Destiny Jackson swished 3-pointers in the fourth quarter, and Siera Fesperman came off the bench for another bucket.
Sophomore Taylor Cullen scored eight points for the young Blue Devils. Junior Sehrena Hull had six.
The Blue Devils, who average only 37 points per game, failed to reach double figures in any quarter.
Carson takes on East Rowan in a 3 p.m. semifinal today.
Mooresville, which beat Carson in a first-round game last season, plays in the 9 a.m. consolation game against Salisbury.