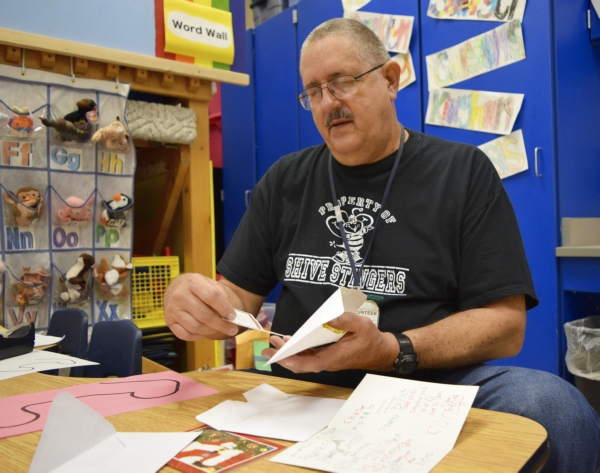 Ronnie Troutman, 66, sits in a chair that is too small for him, proudly showing off a Christmas card covered in the scrawled signatures of an entire kindergarten classroom. Earlier, he fetched hot chocolate for a class party that is now in full swing at the other end of the room. But Troutman sits in a quiet corner, next to an ABC chart, working on cutting out gingerbread men.

When the teachers at Shive Elementary talk about Ronnie Troutman, they all say they’re not sure what they’d do without him.

The catch is, it’s not Troutman’s job—he’s a volunteer.

Troutman used to drive buses for the school system, but when he had a pacemaker put in ten years ago his CDL license was pulled. Since then, Troutman has been searching for a cause. He applied for disability and got it, but there was just too much time in the day.

When his son, Lucas, started attending Shive in Kindergarten, Troutman tagged along.

“I just started coming to school, asking where could I help or what could I do,” he said.

Lucas is in fourth grade now and a straight A student, Troutman says with pride. Troutman, in the meantime, has become a permanent fixture at Shive. He arrives at Shive early every morning, and is often seen after the last bell has rung, helping out with clubs, fundraisers or fixing things around the school.

Every day he rounds the school, popping his head in each classroom and asking teachers if there’s anything they need. The kids know him by name, and wave at him in the hallways.

During the day, Troutman is a fix-it man, a secretary, an errand runner and a carpenter.

“He just kind of does whatever we need,” Principal Zebbie Bondurant said.

Often, it’s simple things that teachers may not have the time to do themselves—sharpening pencils, making copies, laminating or cutting out shapes. When Rowan-Salisbury went one-to-one he helped put covers on all of Shive’s iPads. Last year, he stamped nearly 1,000 new books. And when batteries die in the car-rider line Troutman is there, jumper cable in hand.

While he’s not allowed to instruct the kids or directly supervise them in any way, he will help out with group activities and help make sure kids are staying on task or get them excited about a project.

But Troutman always tries to go above and beyond. He makes food runs for teachers, and once brought hot dogs to field day. Last year, he tried his hand at carpentry, making filing shelves and step-ups so that younger children could reach school smart boards. He even made a few back scratchers for some of the teachers.

As a volunteer, Troutman doesn’t get paid or compensated for his work in any way, but he thinks that In Troutman’s mind, if there’s anyway he can help, he will.

“It’s something that I love to do,” he said.

Bondurant and others in the office joke that Troutman will call in if he has to miss a day of school—they tell him he doesn’t need to let them know, he’s a volunteer. But Troutman says he does anyways, and he makes a point to plan vacation time and “days off” around school breaks and holidays.

When Lucas goes to middle school, Troutman says he plans to stay on at Shive. He’s happy where he is, and feels that it’s something of a calling.

Working together: Principal of the Year Dr. Latoya Dixon builds relationships with staff, students and parents

When Dr. Latoya Dixon started teaching in 1999, she had a chalkboard and an overhead projector. “Teaching’s changed so much... read more