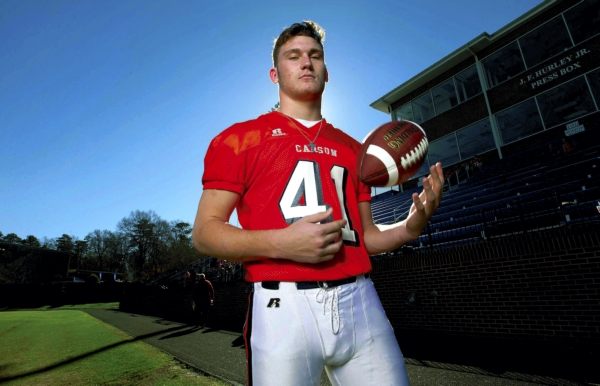 SALISBURY — His first outing set the tone for Ryan Bearden’s amazing senior season.
Carson was at North Rowan, trying to end a three-game losing skid against the Cavaliers.
Carson prevailed, 44-26. Bearden recovered two fumbles, intercepted a pass and blocked a punt. The fumble recoveries led directly to 10 points. He also returned the interception to the 3-yard line to set up seven more.
“It was the perfect way to start the season,” said Bearden, smiling at the memory.
Bearden wasn’t Superman every week, but he was close enough. He’s the Salisbury Post’s choice for Rowan County Defensive Player of the Year.
There was stiff competition from two of the county’s rising stars. West Rowan’s sophomore defensive lineman Devin Turner was scary-good at times. North Rowan’s rangy junior Zion DeBose probably has the highest ceiling of all the county’s defenders. He put up eye-popping tackles-for-loss and quarterback-hurries numbers on his way to Central Carolina Conference Defensive Player of the Year honors.
Still, Bearden made more game-changing plays than anyone and did it in a league with six stout teams. He was in on 128 stops and was the primary tackler 94 times. He had 16 tackles for loss and four sacks. He produced nine turnovers — with a school-record six fumble recoveries and three interceptions. There also were two forced fumbles, two blocked kicks and six pass breakups for the 6-foot-4, 240-pound linebacker.
“You pull up his stats, and those are the kind of stats you dream about,” Carson coach Joe Pinyan said. “It’s crazy to expect anyone to play like that, but he just did what he’s capable of. You name it — he did it.”
Bearden is a talented athlete. In baseball, he belts homers and he’ll be throwing in the 90-mph range on the mound for coach Chris Cauble’s baseball Cougars this spring. He’s not a star in basketball, but he’s an effective role player for coach Brian Perry as a shot-blocker and rebounder.
Carson has been around for 10 seasons. Bearden is the first Cougar to be named Rowan County Defensive Player of the Year.
“A big part of it was Ryan had some real good ones around him,” Pinyan said. “Our other two linebackers (Jacob McCurry and Alex Deal) were solid. That gave Ryan a chance to make a lot of plays.”
Bearden said there were no shortcuts to his breakout season. Just a lot of sweat, attention to detail and listening to coaches.
“I worked hard and did my best to get better each day,” Bearden said. “One practice at a time and one game at a time. Each week, I tried to prepare to have a good game and to help us win.”
Carson won seven times. The Cougars nearly made it eight, but they fell to West Rowan, 28-27, in overtime in the first round of the 3A state playoffs.
“Incredible game,” Bearden said. “It hurt to lose it.”
That was Bearden’s final high school game. Like all of his teammates, he left his heart on the field in Mount Ulla. His effort capped a sensational season.
“He had that great start against North — that was key for him — and then he just kept it going,” Pinyan said. “Even late in the year when he had a bum shoulder, he was still leading us in tough SPC games, and his teammates fed off his ability.”
Bearden isn’t sure what’s coming next, but there should be plenty of recruiting interest.
“I’m getting looked at and we’re starting to talk to some people,” Bearden said. “I haven’t made any decisions yet. We’ll just have to see what happens.”