Gotta Run: Girls on the Run, Vince Pastore and the Resolution 5K 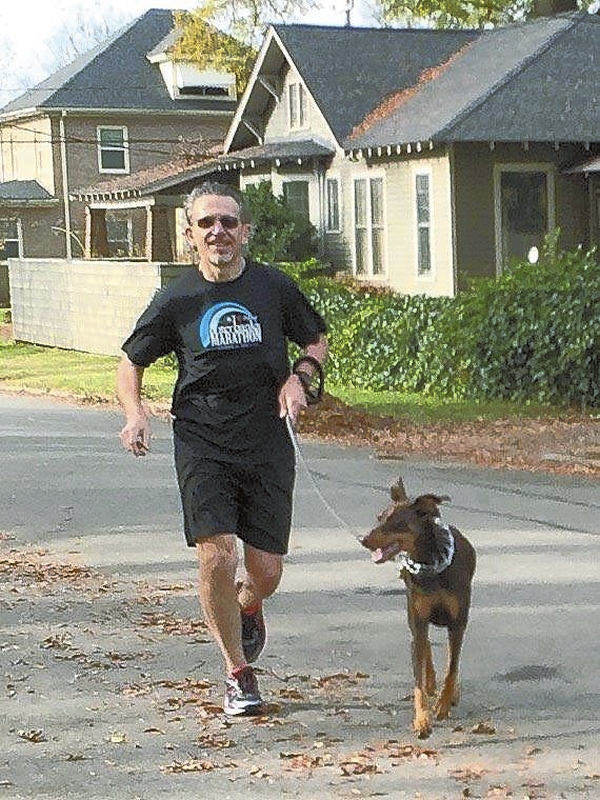 Vince Pastore and his Doberman Gemma on a morning run. Submitted photo.

The Iredell/Rowan branch of Girls on the Run will have its end of the year celebration on Saturday morning, Dec. 12, at Catawba College. This is not a competitive event but serves as a graduation of sorts for the fall training session of GOTR. Approximately 500 girls will run the 5K course along with their running buddies. Individual times are not given, but the girls and spectators can see times as they cross the finish line. Vendors will be set up on the football field prior to the 9 a.m. start.

No other races are scheduled for the rest of the year in Rowan County, but the next event is a different type of run/race called the Resolution 5K on Jan. 1, 2016. The Salisbury Rowan Runners, the Forum and the city of Salisbury will partner for this special benefit for Rowan Helping Ministries. Entry fees are amazing, either a donation of at least $5 or five canned goods. The first 250 runners will get a dri-fit shirt and everyone gets refreshments afterwards. There will be no official timing, although a digital clock will be running at the finish line. You will still get a place card and can ask for your time based on your place card. There will be no awards.

Come join us to get the New Year off to a great start and help Rowan Helping Ministries at the same time. Last year, 201 runners and walkers took part in the Resolution 5K. Check www.salisburyrowanrunners.org for more information on the Resolution 5K Run/Walk and the Beginning Runners Class below.

Another way to get 2016 on its way with a bang is to sign up for the Beginning Runners Class at Salisbury’s First Methodist Church that is provided by Novant Health, Salisbury Parks and Recreation and the Salisbury Rowan Runners. The series of eight meetings begins on Monday evening, Jan. 11, at 5:45 p.m. and will conclude on Feb.29. For $65, each participant gets a dri-fit training shirt, the class, membership in SRR for one year and entry into the FUMC Run for Missions 5K on Sunday, April 3. Individual coaching is also included, along with professional instruction on shoes and equipment, nutrition, stretching and strengthening, injury prevention and safety. Call 704-310-6741 or 704-202-6601 for more information.

My plans are to highlight local runners weekly in this column. Over the last couple of weeks, my focus has been on the up and coming younger runners. This week, I’ll talk about one of our longtime runners with plenty of “grizzled veteran” credentials. Vince Pastore took a strong second place in the 60 and over age group at the Butterball 5K on Thanksgiving morning, just one second ahead of longtime rival Victor Rosado.  I have known both of them for many years, but this week learned quite a bit more about Vince that I thought was worth sharing.

Vince has been a longtime runner, getting his start growing up in Brooklyn, N.Y., as one of the smallest but fastest kids in his neighborhood. Vince said, “That pretty much guaranteed that I would get chosen to play our sport of the day. We played chase and capture games that increased my speed and agility.” Long distance running was part of Vince’s preparation for playing football as a teen.

After a move to San Diego, Vince began running to and along the beach daily on his 6-mile run. He said, “It fit the California lifestyle, but I needed the physical and mental health that the run provided.” Vince ran his first and fastest ever 10K race, beating 41 minutes.

Children, a divorce and a back injury later, Vince had been told by his doctor that there would be no more running. After a weight gain of 25 pounds over the next five years, Vince resumed running for weight control and mental health. He discovered competitive racing and completed multiple 5Ks, 10Ks and half marathons. Vince eventually trained for and completed his first marathon (26.2 miles).

Now, 15 marathons later, Vince has nearly completed his training for the Kiawah Island Marathon on Dec. 12. He will be attempting to get his first Boston Marathon qualifying time after several previous attempts. Based on his 5K time at the Butterball, there is a great chance that this will be the year.

Through a running career that has just entered his sixth decade, Vince counts some of the highlights as running with his son, racing the New York City Marathon over the streets of his childhood and meeting and developing friendships with some of the most supportive people ever.

Vince, who holds a doctorate in psychology, credits running for many positives in his life. Some of them include learning about himself in a way that no other activity could provide, allowing for a time of personal meditation and deep spiritual renewal and creating a sense of harmony and balance. Vince added, “And as long as I run, I can eat just about anything that I want.”

The bottom line comes with Vince Pastore’s closing statement. He said, “I hope to continue to run indefinitely. I recently told my wife, Debra, that if I start to lose my mind as I age, I would appreciate it if she still takes me for my daily run. She laughs when I remind her of this, but the reality is that running and the multiple benefits of it have been the best medicine in my life!”

What a perfect way to close for this week’s Gotta’ Run. See you next week!