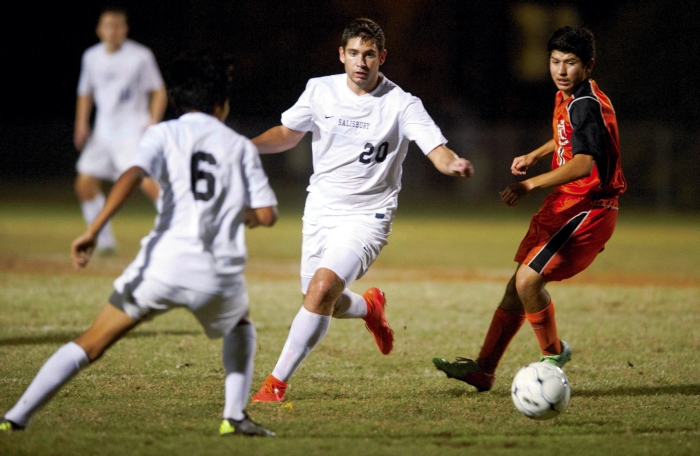 SALISBURY — Both the field conditions — and the opponent — were tough on Saturday, but top-seeded Salisbury’s soccer team advanced in the 2A state playoffs with a 3-0 win against Ashe County.
“We didn’t look very Salisbury-esque other than really strong bookend goals at the start and the finish,” SHS coach Matt Parrish said. “Part of that was field conditions. Part of that was an opponent that was determined to knock us off. I thought we were looked a step slow and I thought we looked a little timid. A playoff win is a playoff win, but there were times tonight when the 50/50 balls looked like 70/30 for them.”
Landon Goodman scored twice for the Hornets (23-0-2), who have won 21 straight and have outscored the opposition 136-12. Goodman’s second goal of the night — the 109th of his career — came on a penalty kick and tied him with Jake Pace for second on the program’s all-time scoring list.
Kevin Flores had the late goal that finally took the fight out of the Huskies (15-7-1).
It was physical, to say the least. Joshua Lynch got cleated and missed the last three minutes of the first half.
“It got a little rough, but I don’t think I was cleated deliberately,” Lynch said. “They were getting a little frustrated and they were a team that had nothing to lose. We just had to keep our heads. In big games, you have to keep your heads.”
Keeper Arturo Ramirez took a blow to a knee and sat out six minutes in the second half, with Jack Fisher filling in.
Parrish also kept his fingers crossed that forwards Melvin Bonilla and Andrew Kalogeromitros wouldn’t tweak injuries on a field that wasn’t in great shape, especially on the end toward the fieldhouse.
“The field was passable, but just barely passable,” Parrish said.
Parrish was one of the early-morning administrators for the SAT, so he spent about 13 hours at the school on Saturday. He’d made up his mind by 9 a.m. that the game would be played. Assistant coach Taylor Strode was spreading sand on standing-water areas not long after that.
Parrish was on the field at 12:30 p.m., and said 220 gallons of water were suctioned off the field with a Shop-Vac. Countless more gallons were pushed off the playing surface by coaches and players.
“We’ve got dedicated coaches who really care about the program,” Goodman said. “They really wanted us to be able to get this game played.”
Three minutes into the game, Goodman was scoring on a pass from Kalogeromitros. It was Salisbury soccer. Diagonal run by Goodman. Diagonal pass by Kalogeromitros.
“Andrew got the ball to me in a good area, and I was able to put it away,” Goodman said.
It was one of the few opportunities Goodman would have. Ashe County played with five backs and almost always had two bracketing Goodman. Field conditions limited Goodman’s side-to-side movement, which is his strength. There just wasn’t anywhere for him to go to get open.
It was still 1-0 when a handball in the box was called on Ashe County seven minutes before halftime. An Ashe County player had his elbows out and the ball struck him between his arm and elbow.
“It was a huge call and a close call,” Parrish said.
Goodman converted the penalty kick for a 2-0 halftime lead.
While Salisbury appeared in control in the first half, Ashe County applied pressure in the second half. Ramirez had to make two diving saves to his left and a leaping save, but he was equal to the challenge.
Salisbury fans were relieved to see Ramirez return after his injury scare, and he said he’ll be OK.
“I just had to man up,” he said.
Ramirez, Lynch, Cristian Uribe, Reilly Gokey and Pedro Cruz made that 2-0 lead stand up most of the second half.
With a little over three minutes left, a long Ashe County shot came directly toward Ramirez on the ground. Instead of scooping the ball up, he took a giant step toward it and launched a driving kick that initiated the equivalent of a basketball fast-break. Suddenly, the Hornets had numbers.
“I knew I had enough time and enough room to get some power into that kick,” Ramirez said. “I know I had the option to just pick the ball up and hold it, but I decided to take a chance.”
Goodman chased down that kick and controlled the ball, and he passed to Kevin Flores on the left wing. Flores drilled the Hornets’ final goal from long range.
“Flores is a clutch scorer and he’d gone into the game to do exactly what he did,” Parrish said. “We had so many opportunities tonight, but we kept roofing shots and sending shots wide. I told Kevin when he went in there to put one on frame and at least make their keeper handle the ball.”
Goodman smiled as Flores ended the Hornets’ drought.
“Great shot to the bottom corner,” Goodman said. “When Kevin scored, it was game over.”
The Hornets moved on despite some shaky minutes.
“We could’ve played faster and we should’ve put more shots on frame,” Lynch said. “But we did OK.”
Salisbury will take on CATA at home on Wednesday. CATA beat Franklin 4-0 Saturday and is a strong team that lost 2-1 at Salisbury on Oct. 22.
•••
NOTES: Salisbury soccer players Gokey and Matt Washko were among the top runners for the Hornets in the 2A cross country championships in Kernersville on Saturday morning.