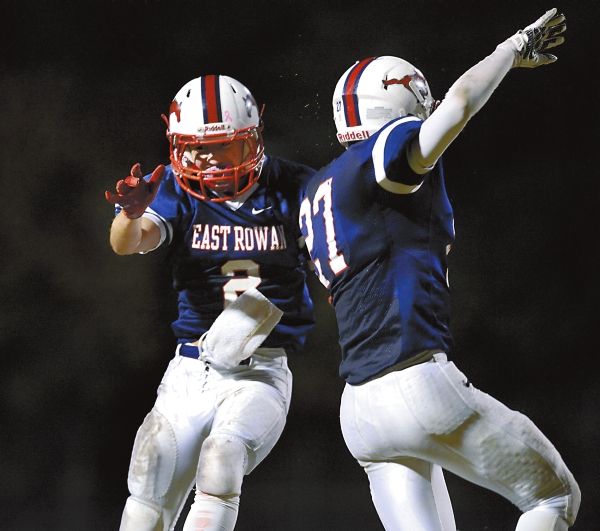 Prep football notebook …
For a few moments on Friday at Ludwig Stadium, Salisbury manager Stephen Gilmore became a running back.
There were tears, but there were smiles. People were crying and punching the air at the same time.
Gilmore, 19, is fighting cancer for the third time. He defeated brain cancer when he was 3 years old. He beat colon cancer when he was 16. Cancer returned last spring.
“This is a kid that texted me from the hospital, apologizing because he couldn’t make it to a jayvee game,” Salisbury coach Ryan Crowder said. “He’s fighting cancer — and he’s apologizing. That’s the kind of kid he is. That’s how much he loves this football program.”
Crowder said that in his three seasons as head coach, Gilmore has meant just as much to the program as senior stars such as D.J. Alexander, Antwond Glenn and Darius Jackson.
“Our kids have always rallied around Stephen,” Crowder said. “A lot of his best friends are guys on the team. Before the cancer came back, I’d see him in the halls talking sports with D.J. and Darius. They would all be laughing.”
Back in May, Gilmore was elected Salisbury’s prom king.
That was proof of his popularity with the student body, but his greatest dream always has been to suit up in the red and gold of the Hornets.
Salisbury administrators, coaches and Gilmore’s mother, Wendy Gilmore Baskins, made that happen on Friday when West Davidson visited Ludwig Stadium.
“We knew we wanted to get Steven into this game, but we weren’t completely sure when it would be,” Crowder said. “We debated doing it at the end and we debated doing it at the start. We decided the best time to do it would be the first time we had the ball.”
It was Senior Night, so there were pregame festivities, as Hornet players were recognized. During that time, Crowder had a chance to talk to West Davidson coach Bryan Lingerfelt. Lingerfelt was cooperative, happy to do anything he could.
“After the pregame stuff, we went back down to the locker room, and I helped Stephen put on his uniform,” Crowder said. “He wanted to make sure everything was just right. He wanted to know if he should buckle this or button that. He looked perfect.”
But there was one more thing.
“He needed a mouthpiece,” Crowder said. ‘We found him one.”
Crowder explained to an excited Gilmore he would be on the field for Salisbury’s first play from scrimmage.
Quarterback D.J. Alexander would be in shotgun formation. Gilmore would line up next to him, in the spot where Glenn usually stands. Alexander would hand the ball off, just like he would hand it off to Glenn, but Gilmore, instead of charging into the line, would take a knee.
Gilmore, in a hospital bed a day earlier, stood with Salisbury’s captains for the coin toss.
West Davidson kicked off. Glenn returned the ball to the Salisbury 25. Then P.A. announcer Alex Weant let the crowd know Gilmore was entering the game.
All went according to plan. The Hornets snapped the ball in shotgun formation. Gilmore took the handoff from Alexander and promptly took a knee. It didn’t matter that the clock didn’t run and it didn’t matter that the refs returned the ball to the 25. All that really mattered was that Gilmore was in uniform, and that he was between the lines, on the field. He was one of 11 Hornets.
“Stephen was very happy,” Crowder said. “This wasn’t a novelty act. This wasn’t just special for Stephen. This was special for everyone at Salisbury.”
Glenn replaced Gilmore and powered for the first 7 of his 174 yards. The inspired Hornets (3-7, 1-3 CCC) were on their way to a resounding 34-0 victory.
They won this one for a courageous kid who loves football more than any of them.

Carson
Strange things are happening at Carson where the Cougars have thrown for 358 yards the last two weeks while beating Northwest Cabarrus and Hickory Ridge.
The 24-6 win over Hickory Ridge was the biggest of the season for Carson (6-4, 4-4 SPC) and made certain the Cougars would be in the 3A state playoffs.
•••
Sophomore Owen White has thrown for 957 yards and has only four interceptions in 109 attempts. White threw a season-high 19 passes against Hickory Ridge.
Brandon Huneycutt has been the biggest winner in Carson’s recent aerial assault. He’s had back-to-back 100-yard receiving games to go over 1,000 yards for his career.
The last Cougar with back-to-back 100-yard games was K.J. Pressley, who had four straight in the middle of the 2011 season.
•••
Safety Andrew Jerman intercepted his fourth pass of the season Friday and leads the county.
Ryan Bearden and Matt Beaver both recovered their fifth fumbles. They are co-leaders in the county.

West Rowan
Austin Morrison kicked five PATS in a 41-0 win against Cox Mill and leads the county with 32.
•••
L.J. Robinson had a game-changing interception return for a TD against Cox Mill, his second defensive TD of the season. Robinson had a fumble recovery for a score against South Rowan.
Theo Fisher, Jai Hogue and Malcolm Ingram also have scored defensive TDs this season for the Falcons.
•••
West has 13 interceptions. Ingram got his third on Friday to tie J.T. Sanders for the team lead.
•••
If West can win at Hickory Ridge and Robinson upsets Concord, the Falcons would tie for first place in the conference.

East Rowan
Naquis Caldwell ended a drought with a TD reception in a 34-24 loss to Central Cabarrus.
Caldwell had five TD receptions in East’s first three games.
TD No. 6 came Friday and was one of his five receptions. He had 91 receiving yards, his highest total since opening night.
Caldwell, a senior, had eight TD catches as a junior.
•••
Wesley Porter’s pick-six on a dazzling return on Friday accounted for the Mustangs’ first interception return for a score since Austin Hill had one against Northwest Cabarrus in 2013.

North Rowan
North Rowan has held six straight opponents under 100 passing yards. Thomasville had 71 in Friday’s 17-7 CCC win against the Cavaliers.
•••
Friday’s loss was North’s first in CCC play since returning to the league prior to the 2013 season. The Cavaliers had won 13 straight.
•••
North’s 25 passing yards against Thomasville marked its least productive passing night of the season.
•••
North can still tie for the conference championship if it beats Salisbury and Lexington beats Thomasville.

South Rowan
Robinson broke the school record for scoring in a 66-16 SPC win over the Raiders. Robinson had scored 62 in a blowout of Cuthbertson in 2009 for the previous mark.
Michael Young scored on a long pass, a fumble recovery and a kickoff return for the Bulldogs.
•••
Michael Parks had a 95-yard kickoff return TD for the Raiders (0-10, 0-8 SPC).
The last South player to return a kickoff for a touchdown was Bryson Deaton in a 41-13 loss to Central Davidson in 2013.
•••
Austin Chrismon threw his first TD pass of the season for the Raiders, and Tyler Rary caught his first.
•••
Brennan Lambert kicked his ninth field goal of the season.
•••
Marshall Long had another good punting night and has averaged 46.4 yards on 54 punts. He’s on pace to break the county record for a season.
Long will receive his jersey for the Army All-American Bowl at 1 p.m. on Dec. 12.

Davie
Davie’s 40-33 CPC win against Mount Tabor not only seems certain to propel the War Eagles into the 4A state playoffs, it was one of the program’s biggest wins in recent history.
Since beating Reagan, 28-7, late in the 2012 season, Davie had been 0-13 against the league’s big four — West Forsyth, Reagan, Mount Tabor and North Davidson.

A.L. Brown
In a 34-7 MECKA win against West Charlotte, the Wonders (8-2, 3-2) rushed for 317 yards, their second-highest ground output of the season and the most they’ve had since trampling South Rowan for 407.
Sandon McCoy rushed for 135 yards, his third 100-yard game of the season.