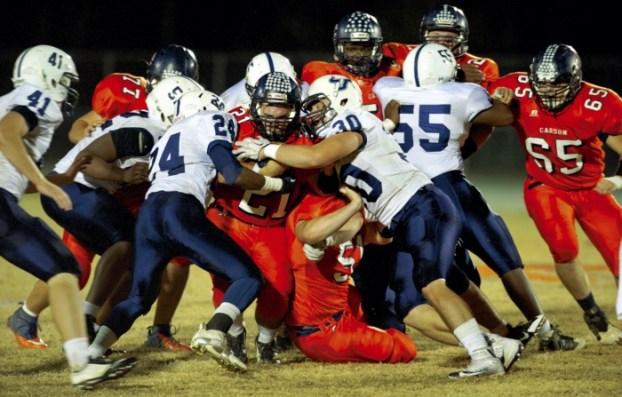 CHINA GROVE — Somebody told Carson’s football team it had no chance in Friday’s SPC game against surging Hickory Ridge, but somebody was wrong.

The Cougars silenced their doubters by crafting an exhilarating gift of a game and working their way into the post-season picture. A convincing 24-6 victory was their second straight and first against a favored opponent.

“A lot of people think we’re gonna get in (the state playoffs),” coach Joe Pinyan said after Carson (6-4, 4-4) played a near-flawless game. “But everybody says we haven’t beaten anybody. We beat a North Rowan team that I think is pretty good, but we needed a signature win against a good, high-calibre team. Hickory Ridge is that.”

It was a game that brimmed with pleasures small and large and made Carson fans want to burst into song. The visiting Ragin’ Bulls (6-4, 6-2) had won five in a row and were contending for the conference crown. But instead of brushing the Cougars aside and heading into November with a full head of steam, they stumbled out of the gate and never righted themselves.

“We weren’t ready to play,” said losing coach Marty Paxton. “I’m not sure why, but we were flat. Coach Pinyan had his guys ready for the fight. We weren’t.”

“Everything Owen and I do is because of the OL,” Huneycutt said after making eight receptions for 122 yards and becoming the school’s fourth 1,000-yard receiver. “They don’t get credit for it, but those guys are the hardest workers in practice. We couldn’t do what we do if they don’t do what they do.”

They did it right from the start. Carson junior Andrew Jerman intercepted Waslo’s second pass of the game and returned it to the HR 28-yard line. Seven plays later running back Bailey Rayfield — subbing for injured senior Andy Lear — found a seam and powered into the end zone for the first of three Cougars’ touchdowns.

“Without Andy we’re not the same,” teammate Dylan Livengood said after rushing for a team-best 65 yards. “The rest of us had to put our heads together and run our hearts out for him.”

“It was good that we put points on the board real fast,” White said after passing for 178 yards and making a 30-yard reception on a second-period throw from Huneycutt. “As soon as we punched one in we knew things would fall together.”

White stitched together Carson’s best drive of the game in the second quarter. Following a turnover on downs, the Cougars navigated downfield from their own 18 and reached the end zone when Austin Lear scored on a seven-yard burst up the middle with less than a minute on the clock. A key play was Huneycutt’s 35-yard catch-and-run to the visitors’ 13 with 1:31 to go. Howard added some comical relief when his line-drive extra point attempt crashed off the crossbar and tumbled between the uprights. The 13-play drive more than five minutes, thanks to that hard-working line.

“We really needed this one,” said 285-pound center Nick Holman. “In the huddle we were saying, ‘Guys, we need to play harder than we ever have on this play.’ And we did that on every play.”

Left tackle Alex Barrier offered more insight. “The biggest thing for us tonight was our attitude,” he said. “We had to win the mental battle as well as the physical battle. We get outweighed every week. We just had to work our tails off this week.”

The battle continued in the third quarter until Carson landed an uppercut that staggered the Ragin’ Bulls. A 10-play drive ended when White received about nine seconds of protection and lofted a 29-yard TD pass to the wide-open Huneycutt.

“That’s the beauty of it,” Huneycutt said. “The longer those blocks hold up, the longer the play can go on. I have the easy job. I just have to catch the ball.”

Hickory Ridge threw its hands in the air and surrendered after Carson’s Matthew Beaver recovered a fumble with 2:06 to play.

“We put a lot of pressure on their quarterback,” said McCurry. “All night, the outside linebackers were calling the pulls. It worked. Now we’ve got people paying attention to us.”

By Brian Pitts For the Salisbury Post With a playoff berth on the line for both teams, Davie County came... read more