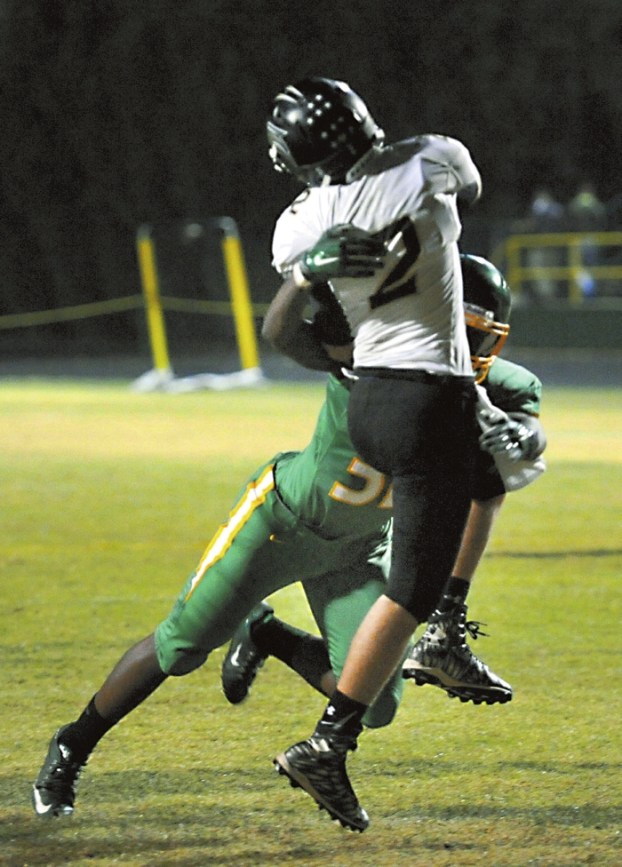 SPENCER — Long-armed junior defensive end Zion DeBose reminds North Rowan defensive coordinator Steven Williams of former Arkansas Razorback and current Jacksonville Jaguar Chris Smith.
That’s a flattering comparison for anyone. Not only is Smith drawing paychecks in “The League,” he’s a role model generally admired all over Rowan County.
Smith was Williams’ star pupil at West Rowan from 2007-09. Williams, who starred at Catawba in his playing days, was a defensive line coach for the Falcons.
Smith, who didn’t play football as a West freshman, blossomed into a state champion, a Shrine Bowler, an SEC recruit — and eventually a draft pick — under Williams’ watch.
Williams sees a lot of Smith in the still-growing, still-learning DeBose. It’s not just DeBose’s talent, it’s his personality, his coachability and his reliability.
The consensus of opinion is that DeBose is good now, but he’s going to get a whole lot scarier down the road.
As DeBose’s star rose last June and July through strong camp performances, Williams asked Smith to counsel the youngster, who is bright, long, rangy and listed at 215 pounds.
“Zion was getting offers, and Chris talked to him about staying humble and staying focused,” Williams said. “He’s done a good job of that this season.”
Smith also informed DeBose it was going to get tougher, not easier, as a junior, and Smith was right.
DeBose was just one of many standouts for North’s defense last year. Teams had to be concerned about Wesley Jefferies and Shane Parker, among others.
“Last year, teams weren’t always prepared for me and I got quite a few sacks,” DeBose said. “This year teams are more prepared.”
Still, game-planning for DeBose and blocking him aren’t always the same thing.
“His speed, the pressure he can bring, everyone is well aware of him in every game we play,” North head coach Ben Hampton said. “But in our eyes, he’s still just a baby in terms of how much better he can get. He’s just a junior, and even though he played a lot last season, this is his first year as a full-time starter on Friday nights. He’s going to grow a lot more as a player.”
DeBose has exceptional quickness. He created serious havoc in North’s 58-0 win on Friday against East Davidson, the most lopsided win the Cavaliers have ever enjoyed against a 2A opponent.
There were two sacks, three QB hurries, and two more tackles for loss when DeBose blew up running plays. Those hurries contributed to some of the five passes the Cavaliers picked off.
Surprisingly, the sacks were only the second and third of the season for DeBose.
“He’s been a little disappointed that his sack numbers are down,” Williams said. “But he’s made a lot of plays. Friday was one of his best games. He was very strong against the run.”
DeBose’s highlight tapes back up that statement. He has gotten tougher, more physical and more tenacious against the run. As a sophomore, he essentially was a pass-rusher. Now he’s a force on every down. He has 26 tackles for loss this season, basically three per game, and he’s forced four fumbles and blocked a punt.
Williams said one reason DeBose has piled up tackles for loss instead of sacks is that North Rowan (4-5) started the season 1-5.
“We got behind early so teams were running the ball,” Williams said. “Lately we’ve been getting ahead and teams have had to throw the ball more. That means more opportunities for our defense to capitalize with sacks, picks and turnovers.”
The five-game losing streak North endured — the Cavaliers didn’t win between Aug. 21 and Oct. 8 — could have crushed a young team’s confidence, but it didn’t. North was losing to good teams (South Iredell and West Stokes are 8-1, Statesville is 6-3, Carson is 5-4, and Davie is 4A), and once North got into CCC play it was ready to win.
“I think those tough times were needed to build us into the team that we are now,” DeBose said. “We have a very young offense, but they’ve grown a lot, and we have vets on defense. Right now, we’re getting better every week. That’s what a winning team does.”
DeBose’s college offers include Duke, North Carolina, N.C. State, East Carolina and Charlotte. He has received early offers partly because of his frame and tools, but also because of he has the grades and work ethic to match his frame and tools.
DeBose’s future position is uncertain. He’ll be an outside linebacker or a defensive end, depending on how much weight he gains. One thing everyone agrees on is that he has a future.
“I know I’m not there yet,” DeBose said. “I’ll hit the weights hard this offseason and I’ll keep working on my craft.”
While it didn’t seem possible a month ago, the offseason for North may be delayed by a few playoff wins. The Cavaliers have a huge game at Thomasville on Friday that will determine first place in the CCC standings.